Pro Tour–Austin Round 1: Getting into the Grove

he first match of the day at Pro Tour–Austin got underway, and in the arena it was a feature whopper! Former Pro Tour champion Mark Herberholz squared off against international superstar David Williams. The two Americans had traveled to the event early to prepare with some of the game's biggest names, and they were playing deck lists that differed by only 5 cards out of their 75. For Williams it was an especially sweet Pro Tour: He is a native of Texas, so the big event marked a homecoming for both the player and his state. To punctuate that point, he offered a die roll to his opponent with custom dice featuring Texas where the single pip would normally be.

The two got underway, and Williams murmured under his breath, "I guess it's whoever doesn't draw the most Wrath of Gods ...." 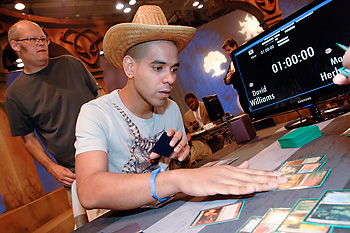 Herberholz led on Steam Vents and Grove of the Burnwillows, with a Punishing Fire in his hand revealing the reason for the Future Sight land. Its "downside" of providing the opponent with life was actually a huge bonus when combined with the burn spell. It gave him inevitability in a game gone long, allowing him to mow down every creature a Zoo or beatdown opponent could muster, or even serving as a Hammer of Bogardanesque win condition. Williams, who had opened on a mulligan, worked on his manabase with Hallowed Fountain and a Snow-Covered Island. His basic land, being of the Coldsnap family, indicated the pro might be utilizing Gifts Ungiven in his deck. It was an old trick used by the professional community to allow them to "tutor" for both a basic Island and a Snow-Covered Island.

The game devolved into a classic control mirror, both players trying to hit as many land drops as they could muster and resolving the occasional Thirst for Knowledge. Experienced veterans, they settled in for the long haul, waiting for the other to flinch first. Instead of forcing a fight over a big spell, however, Mark Herberholz worked on winning by using his ample mana base to cast two Punishing Fires targeting his opponent. He then used Grove of the Burnwillows to force David to gain a life, allowing him to buy his instants back. Williams would need a solution to the dueling Punishing Fires if he was going to stay in the match; otherwise his friend would be netting a free 3 damage each turn!

Entering a discard step, Mark Herberholz moved to empty his hand of the extra card he was holding, only to watch his opponent pull the trigger on his own copies of Punishing Fire, sending two of them at Mark's head. The two players had a good ol' fashioned race on their hands, but Herberholz was in the lead, having gotten his Punishing Fires active before his opponent had. When Mark tapped low to continue doming Williams, Dave had a Gifts Ungiven in response and fetched up Tormod's Crypt, Life from the Loam, Ghost Quarter, and Academy Ruins. Herberholz allowed Williams the Ruins and the dredge spell, then hastily untapped and cast a Tormod's Crypt of his own.

"Hilarious," Williams said dryly. Herberholz had been sandbagging the graveyard hate from early in the game, with the discipline to actually discard cards from his hand rather than simply reveal he had drawn his hate to Williams by deploying it to the battlefield. Mark used the Crypt to ace his opponent's graveyard, then returned to the Punishing Fire game. So late in the duel, the Michigan player was able to cast the instant three times per turn.

When Williams attempted to Punishing Fire back at his opponent, Herberholz responded with his copies. The first resolved and put Williams to 2, meaning he was forced to counter Mark's second. Herberholz simply revealed twin Mana Leaks to stymie that effort and took the first game down.

Both players worked on developing their mana bases early in the second game, sitting on Zendikar fetch lands instead of cracking them immediately. By doing so they increased the likelihood they would naturally draw their lands (by leaving more of the cards in their deck to hit in the first place). Williams eventually cracked a Misty Rainforest to enable him to cast Thirst for Knowledge. That forced Herberholz's hand, as he cashed in a Scalding Tarn for Hallowed Fountain and used Negate to stop the card draw spell. 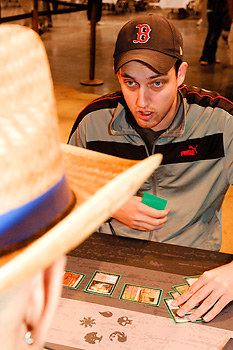 Mark Herberholz is not from Texas, and has thus chosen to play it a little safer in the hat department.

With his opponent tapped out, Williams built to four mana with a Life from the Loam targeting his fetch land, then cast Meddling Mage before passing the turn. Herberholz, now also facing a tapped-out opponent, used Tormod's Crypt to ace Williams' graveyard. At the end of Williams's following turn, he attempted to use Punishing Fire to kill his opponent's 2/2. David had Mana Leak to stop the effort, but Mark simply bought the instant back with Grove of the Burnwillows. When Williams attempted to attack a turn later, Herberholz sent the 2/2 Wizards to a fiery end at the hand of his Punishing Fire.

Williams used Ghost Quarter to blow up his opponent's Grove of the Burnwillows. Mark was easily able to find a basic land as a replacement, but losing the life-gaining land would prevent him from being able to buy back his Punishing Fires. Still, Herberholz had managed to find himself a Life from the Loam and began dredging it to build his mana base, in the meanwhile getting his Grove back online. Williams didn't seem too happy about that turn of events, and could only watch as Mark cast Punishing Fire and bought it back at the end of Dave's turn.

Gifts Ungiven from Herberholz sent Williams into the tank, considering all of his options. Not willing to allow the powerful instant to resolve, he cast Mana Leak despite the fact Herberholz had sufficient mana to pay for the counterspell. Instead, Mark allowed his Gifts to be countered, then sent Punishing Fire at Dave's head to put the Texan to 10. Life by life, Herberholz was outmaneuvering his opponent with Punishing Fire, and Williams was starting to fall too far behind. Trying to make up some ground, he cast Baneslayer Angel. The 5/5 Standard powerhouse made a short debut on the Extended stage as Mark quickly dispatched it with a Path to Exile. To finish up the turn he used Ghost Quarter on David's Breeding Pool and, with an Island and Snow-Covered Island on the battlefield, Williams had no more basics to search up.

By the time Herberholz was resolving a Gifts Ungiven successfully, the game looked to be all but over. Mark had Strip Mine recursion, burn spell recursion, and a stocked hand of counter magic. Williams was down, but he could not be counted out. Tapping four mana, he cast Chalice of the Void, successfully resolving the spell and locking out his opponent's Punishing Fires and Life from the Loam. Herberholz untapped and cast Baneslayer, drawing a pause from Williams. He cast Spell Pierce targeting the 5/5, and Mark politely informed his opponent the Zendikar instant could only target non-creature spells. The Angel resolved, and Williams went to the top of his deck for a removal spell. Two draws went by without one, and he extended his hand in defeat.