Pro Tour–Austin Round 10: "Choosing to Draw? Who Does That?"

got paired down?" Martin Juza asked no one in particular as he sat down for his Round 10 feature match.

"It's good for you I think," responded his opponent, Samuele Estratti of Italy. "My deck is terrible. Beyond terrible."

The players flipped a coin to see who would go first, and Martin won. Surprising everyone, Juza opted to draw.

"Choosing to draw?" Juza asked the crowd. "Who does that?" 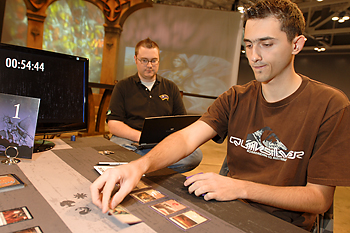 Estratti had a very aggressive start, casting Vampire Lacerator followed by Quest for the Gravelord. His 2/2 Zombie began munching on his own life totals while taking his opponent's down even faster. Juza cast his first spell of the game, a third-turn Steppe Lynx, but had Arid Mesa as his land to allow the 0/1 to block profitably if he wanted. By cracking the fetch land, he could pump his Lynx on his opponent's turn, making the creature 2/3 and blocking the Lacerator handsomely.

Samuele cast Heartstabber Mosquito unkicked, then used Inferno Trap to blow up a second Steppe Lynx from his opponent. That allowed him to crash into the red zone, but post-combat Juza cleared the battlefield of the 2/2 flier by springing his own Inferno Trap. His follow-up was a Bladetusk Boar and the scores stood at 12-11 in Martin's favor. When Estratti cast Goblin Guide, he was able to move ahead in the race making it 11-8, but he did give Juza a free land to do so.

Martin played a Mountain, then began doing calculations. With Steppe Lynx and Bladetusk Boar, he could attack for 7 thanks to his Arid Mesa still held in reserve. He also had Slaughter Cry in his hand, which would bring the total damage to 10. That would leave Samuele at just 1 life, but the Italian could crack back for 4 and potentially burn Juza out. Martin decided to attack with just his Boar, dropping Estratti to 8. Samuele fired back, if you can call it that, with Mindless Null, but couldn't attack profitably. He had to pass the turn, looking for an opening to use the Unstable Footing stuck in his hand. He needed to connect with just 3 damage—2 if Martin used the Arid Mesa—to take the first game with Unstable Footing, but he'd need to draw a land to be able to kick the instant.

Juza plucked a Kor Sanctifiers from the top of his library and attacked with his Steppe Lynx after playing a land. Estratti blocked with his Mindless Null, then found a fifth land on top of his library. It was too little too late as Juza reached the tipping point. He played a Plains, used a second Inferno Trap to blow up one of Estratti's blockers, and sent the team in. Estratti blocked Steppe Lynx, but Slaughter Cry on Kor Sanctifiers was exactly enough for lethal.

Steppe Lynx hit the battlefield on the first turn for Marin Juza, but the play was answered by Blood Seeker from Estratti. Juza had Blazing Torch, then Kor Sanctifiers while Samuele had Mindless Null. When Estratti cast Hideous End to ace the Sanctifiers, Juza was clearly not pleased. He fell to 13 life, and it was only the fourth turn!

A second Steppe Lynx from Juza picked up the Blazing Torch, but Martin was losing life to his opponent's Blood Seeker each time he cast a creature. Samuele had no such concerns, casting Guul Draz Vampire and knocking Martin to 9, though he lost the powered-up Vampire to Inferno Trap at the end of his own turn. Juza had Bladetusk Boar, then Estratti managed to find a copy of the 3/2 for himself. It looked like Juza was close to stabilizing. His Blazing Torch could contain the Italian's Boar, while his own copy of the 3/2 could handle Blood Seeker.

Samuele sent Mindless Null to the red zone, and Juza opted to trade his Bladetusk Boar for the 2/2. On his turn he finally found a fifth land and cast Geyser Glider, taking 1 in the process. It was the last point Estratti needed; the ding knocked Juza to 5, and his opponent cast a kicked Unstable Footing, exactly enough to send Juza packing. 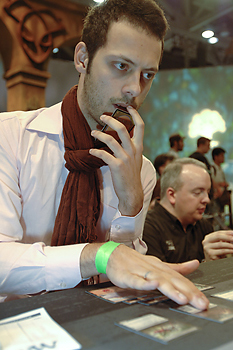 Samuele Estratti has plenty to chew on.

While the two started shuffling for the rubber game, Estratti inquired as to whether his opponent would be playing first or drawing. Juza considered, then asked whether or not he had to declare right away. Neither player was certain what the correct ruling was and, considering Juza had opted to draw in the first game, the announcement could impact how Estratti would sideboard. They called a judge who confirmed Juza would have to declare at some point before he presented his deck to his opponent for shuffling. Juza opted to play, but mulliganed a six-land hand.

The look on Juza's face was not pleasant; clearly he was a bit kerfuffled from the second game and not happy to be down a card in the third. His six-card hand was acceptable, and he had a very aggressive Steppe Lynx into Highland Berserker opening. Samuele cast Hedron Scrabbler to answer with an embarrassed smile. Still, the 1/1 was going to be good against Juza's team if he missed a land drop and/or didn't have a second Ally.

Martin had a land but no Ally, and bashed Samuele for 2 with the Lynx. Postcombat, he cast Kor Sanctifiers unkicked, though with Arid Mesa and a second copy of the 2/3 in his hand, he threatened to make the fourth turn a very bad one for Estratti. Unaware of what was headed his way, Samuele cast Blood Seeker and passed the turn.

Juza considered his options before playing his Arid Mesa. That made the Lynx 2/3, and he cracked the land for a second Plains. The Lynx moved to 4/5, and Juza was able to cast a kicked Kor Sanctifiers to blow up his opponent's Hedron Scrabbler. It cost him a point of life, but he was able to attack unabashedly with his Lynx, Highland Berserker, and the first Sanctifiers. Estratti had Inferno Trap with the trap cost to ace one of the Kor Sanctifiers, but he missed his fourth land drop and could only cast Mindless Null.

Kor Sanctifiers wild rumpused into the red zone to send Estratti to 8, and Martin cast a post-combat Bladetusk Boar. Samuele cast Heartstabber Mosquito to block, but Martin drew a land, allowing him to make his Lynx 2/3, then attacked and had Slaughter Cry for lethal. With only one blocker and completely tapped out, Samuele Estratti was out of options.