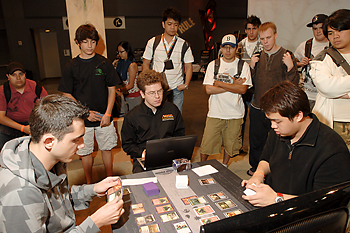 Martin Juza and Marcel Zafra line up their Kird Apes for the Zoo near-mirror.y now everyone’s heard of the rakish Martin Juza, but you might not be familiar with Marcel Zafra. Originally from the Philippines, Zafra’s family moved to Edmonton, Alberta just two years ago. He’s played casually since Onslaught but didn’t really get into competitive play until Guildpact. Since then he’s PTQed his way onto the Tour three times, and now he’s making a charge for a seat on Sunday.

Zafra is playing Dark Zoo, a suite of beaters that dips into black for Dark Confidant, Tidehollow Sculler, and Maelstrom Pulse. Juza’s Zoo is much more straightforward. Sixteen one-drops start things off, and it ends with burn to the face.

Zafra won the roll and led with Sacred Foundry and Kird Ape. Juza drew his eighth card and just stared at his hand.

Eventually he settled on Stomping Ground and an Ape of his own. Zafra made it three Apes, and pumped them up with a tapped Overgrown Tomb. Juza got a Godless Shrine with Verdant Catacombs, falling to 15. He played out yet another Kird Ape and a Steppe Lynx. Zafra untapped and cast Tidehollow Sculler.

He was holding two Tribal Flames (one taken by the Sculler), Might of Alara, and Marsh Flats. Zafra added Scalding Tarn to the board and passed it back. Juza played his Flats and swung in with the Lynx. Zafra let it by for 2, and Juza added Wild Nacatl. 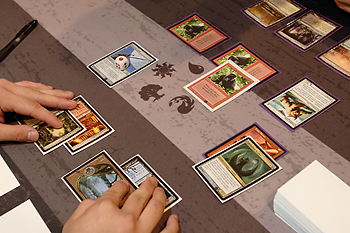 Ape shall not kill ape. Zafra dug up Steam Vents at end of turn, then used Verdant Catacombs to get a basic Swamp, which blew Juza’s mind. With four mana, he played Umezawa’s Jitte and suited up his Ape, then swung in with it. It traded with the Nacatl posthumously via the Jitte. The other counter eyed Steppe Lynx, but Juza still had an uncracked fetch land in play.

Juza had no land to play. He swung in with just his Apes. Zafra blocked one with his own Ape, and Might of Alara took it down. This was fine by Zafra, who was sitting on Maelstrom Pulse. He also had Tidehollow Sculler, however, and not the right mana to play both with five land. He chose the Sculler, which forced a Path to Exile out of Juza’s hand on the Sculler already in play, effectively shifting the Tribal Flames over one spot, with the second still in Juza’s hand. Zafra equipped his new Sculler and passed it back.

Juza played a land and took out the Sculler with Tribal Flames. His attack brought Zafra to 6. Zafra still had the Maelstrom Pulse, and wiped away the pair of Apes. Juza drew another land, putting the Lynx to an effective 4/5 so it could team up with Tribal Flames for the kill. 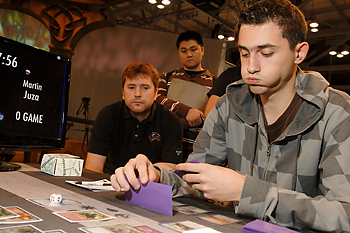 The Zoo mirror involves some tough calls. Juza mulliganed once, and settled on his 6. Zafra turned Marsh Flats into a Sacred Foundry and a Kird Ape. Juza played Scalding Tarn and had no opening play, an anomaly for his deck. Next came Overgrown Tomb and Tarmogoyf for Zafra. Juza fetched up Stomping Ground at end of turn.

He untapped, but only played a tapped Blood Crypt and passed the turn. Zafra was operating just fine on two lands, hitting for 3 and adding Dark Confidant to his team. Again Juza played a land and had no action.

Zafra’s Confidant gave him a Tribal Flames. With a tapped Steam Vents it domed Juza for the full 5, and his team brought 6 more. Juza drew his card, and scooped.

Zafra took another 3, also getting Godless Shrine (off Arid Mesa), and Tribal Flames took out Juza’s monster. He swung in for 3 with Wild Nacatl and passed it back. Juza got basic Mountain from a Tarn and went up to 15 via Kitchen Finks. Zafra put it away for good with Path to Exile, and Juza double-checked that his deck was out of basics. It was. The kitty hit, and Juza was down to 12. Zafra added Tarmogoyf.

Juza fought back with Oblivion Ring on the Tarmogoyf and Nacatl. Zafra swung in and Juza traded Cats with him. Kitchen Finks put Zafra to Eleven. Juza drew, played a land, and passed it back. Zafra hit again, but Lightning Bolt cut damage from the Finks, putting Zafra up to 13. He then played Dark Confidant.

“Wow, did you really keep that in?” –Martin Juza 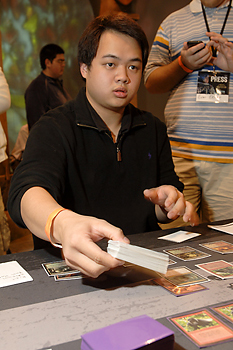 The Zoo mirror also involves some shuffling. Juza got a Finks of his own onto the battlefield and waited. Confidant gave Zafra a land, and his next draw was Duergar Hedge-Mage, freeing his Tarmogoyf from Oblivion Ring. He swung with the wee Finks and Dark Confidant, and Juza was happy to put his own Finks in front of the Confidant. Unfortunately for him, his next draw was yet another land.

Meanwhile, Zafra was gassed up. He attacked again. Juza Lightning Bolted the Hedge-Mage and the two Finks took each other out. The big Goyf still got through for five. Zafra played another Finks, Juza’s face sinking further. He pulled a Wild Nacatl off the top, but it was nowhere near what he needed.