Pro Tour–Austin Round 13: Livin’ on the Dredge 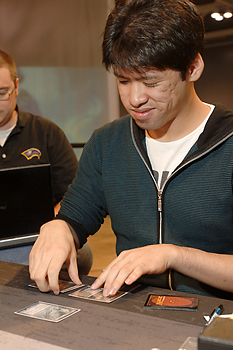 uuya Watanabe is a Japanese standout and former Rookie of the Year. In an interview immediately following his receiving the trophy for that honor, he was quoted as saying he wanted to become Player of the Year some day. During the 2009 season, he has made that a very real possibility leading the race headed in to the weekend. His opponent, Sebastian Thaler, was a fellow former Rookie of the Year who, while not a leading contender for Player of the Year in 2009, was a considerable opponent with multiple Pro Tour Top 8s.

The showdown was a Dredge mirror, and Watanabe got on the board first with a Drowned Rusalka he used to attack his opponent to 19. His second turn saw him cast Ideas Unbound, discarding Dread Return, Bridge from Below, and Stinkweed Imp. Since its inception, the Dredge mechanic has been a powerful draw engine, essentially allowing players to treat their graveyard as an additional library and providing them a huge bonus for getting cards from their actual library flipped to their discard. Thaler played and cashed in a Scalding Tarn to find a basic Island, then cast an Ideas Unbound of his own. The cards he discarded were not promising; instead of dredge cards, he lost a Magus of the Bazaar and two Narcomoebas. Both players chuckled good naturedly at the German’s misfortunes.

Yuuya milled Stinkweed Imp and found himself a Life from the Loam and two more Stinkweed Imps in the yard. He used the turn to cast a Narcomoeba and attack with Drowned Rusalka while Thaler cast a Magus of the Bazaar. The Rusalka sacrificed Narcomoeba, allowing Yuuya to dredge with Stinkweed Imp for another five cards, then five more on his draw step. He netted a Bloodghast and a Narcomoeba, and the game was looking abysmal for Sebastian Thaler. His graveyard was practically nonexistent, while Yuuya had “drawn” 20+ additional cards.

Access to four mana allowed Yuuya to mill even more cards, combining his Drowned Rusalka with Stinkweed Imp. By the time he was done, he had managed to find a second Bridge from Beyond and enough actual creatures to make flashing back a Dread Return on Flame-Kin Zealot a lethal play. He did exactly that, getting six Zombie tokens that became 3/3 and attacking for a considerable amount of damage from a board that was nearly empty at the start of the turn. Sebastian Thaler watched, resigned to his fate, then conceded. 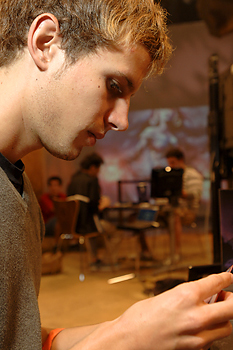 Thaler tries to rise from the grave. Both players kept their opening hands, and though he was on the draw, Yuuya had the first spell: Leyline of the Void. Sebastian Thaler seemed to be caught off guard by the play, as he had been reaching to drop his first land. He gave an exhalation of discontent followed by a knowing smile and a re-read of the card to make sure he knew the fine print. Yuuya also had the first “actual” spell of the game, casting Hedron Crab on his first turn.

Thaler had Magus of the Bazaar to try to find his sideboard hate, something he would almost assuredly need in order to get past the Leyline. Yuuya played a Verdant Catacombs, milling a Dread Return, Bridge from Below, and Narcomoeba, then dredged three more as he cashed the fetch land in for a Breeding Pool. When he cast Drowned Rusalka the same turn with a second Bridge having flipped, Thaler sighed and extended his hand. He wasn’t going to be keeping up with that start.

After the match, Sebastian revealed he hadn’t actually had an answer to the Leyline; his hope was to beat Yuuya down, but when the Japanese star had as blistering a start as he had in the first game, the German just didn’t have a shot.