o Canada’s Marcel Zafra must be feeling good. He’s sitting three points up from the rest of the competitors, and a full five ahead of his Round 14 opponent, Hall-of-Famer Raphael Levy. But, no matter how well you’re doing, sitting across the table from Levy can’t feel too great. And well, he’s not really Canada’s, as he’s originally from the Philippines. So pretty much everything I’ve said in the first sentence, other than his name, is probably wrong. 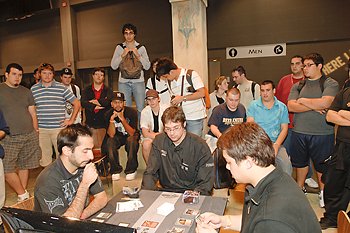 Raphael Levy and Marcel Zafra draw a crowd of MEN (helpfully labeled), along with at least one woman.

Zafra scurried up to the table and quickly began shuffling. The two players rolled off and kept their opening seven, and Levy opened, after much thought, with a Verdant Catacombs. And after Zafra opened with a Kird Ape, Levy thought even more when he popped the his enemy-aligned fetch land. With a Bant Charm, Qasali Pridemage, Vendilion Clique, Hallowed Fountain, Island and a Misty Rainforest in his hand, he had to be particular with his early mana. He eventually settled on a Breeding Pool and drew for his turn. His Bant deck was slower than Zafra’s Naya Zoo, but if Levy could halt the initial animal assault, Levy’s deck could quickly seal the game.

The Frenchman’s turn-two Pridemage was followed by a Bant Charm, shipping a new Dark Confidant to the bottom. But that was OK for Zafra—he attacked to make the totals 17–13 in his favor and cast a Tarmogoyf. At this point Levy was still questioning his lands, but settled on a Treetop Village and a Pridemage attack.

Levy declined to tap out to cast one of two Vendillion Cliques, NegateNegating a Tribal Flames at his Pridemage. Zafra barely flinched and followed with an attack and second ‘Goyf.

Though the life totals were 8–8, Levy was facing down two Tarmogoyfs and a Kird Ape with his lone Qasali Pridemage. He shifted in his chair as the turn went back to Zafra with five land still untapped (one of those being the Treetop Village). When the Canadian attacked, Levy activated the Village and threw Apes on Apes, while the Pridemage had ‘Goyf duty. Though Levy Mana Leaked the Lightning Helix aimed at his Village, a third ‘Goyf from Zafra and an empty draw step were enough for Levy to scoop them up.

Levy bolstered his removal suite with another Path to Exile and a Wrath of God. While Zarfa added Meddling Mage to combat Bant Charm and other tricks, Path to Exile, and Gaddock Teeg—replacing Dark Confidants and Mogg Fanatics. 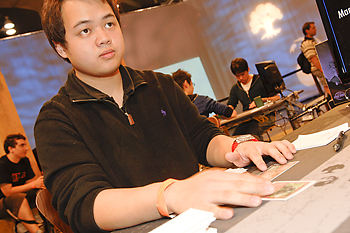 Don’t let the face fool you. He really was nervous.

Raphael Levy has a lot more to win in this match than Marcel Zafra. Sitting on 28 points, Levy will find these last few rounds crucial. He visibly groaned when his opening seven had no land; but Zafra went to Paris with him. Levy settled on six, as did Zafra. Both players kept questionable hands; Levy with only green mana, and Zafra with only one land. Though he seemed content, Zafra’s slight card fumbling let his nervousness show through. Levy, though a game down, is as cool as a cucumber.

Levy’s Treetop Village was answered with Stomping Ground (from a fetch land) and a 2/2 Wild Nacatl. A relieved sigh came from Levy as his draw step wielded him a Misty Rainforest, activating both the Qasali Pridemage and the Spell Snare in his hand.

Though Zafra found a second Nacatl, he didn’t find a second land and simply played “Attack, Go.” Levy drew for the turn. He had Tarmogoyf and an Umezawa’s Jitte in his hand, and deciding between a Forest and a second Treetop Village seemed to plague him. A contemplative Levy eventually settled on the “enters the battlefield tapped” Village and attacked with his exalted Cat, the Umezawa’s Jitte in his hand primed and ready for next turn.

Just a Kird Ape and no second land allowed Levy’s Pridemage to Umezawa’s Jitte himself up and even the score at 11. But no score is ever even with an active Umezawa’s Jitte on the table, and the first Wild Nacatl found its way to the bin.

And though Zafra had a grip full of great cards, including Lightning Helix, Meddling Mage, and his own Umezawa’s Jitte, his draw step still had no land. It took another turn to find the magical land number two, but when it entered the battlefield, Levy simply flashed a Spell Snare, and Zafra scooped them up.

Zafra shipped his mediocre seven, then his terrible six, Levy lightly picked his nails in anticipation, reading Zafra’s every facial tic. The Hall of Famer’s hand was good, and he knew it. 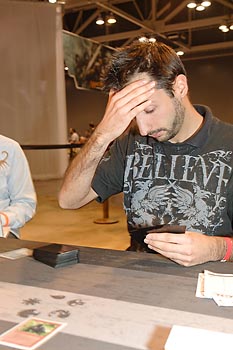 And that hand on the forehead? Total head game.

And Levy only felt better when all Zafra could do was lay a tapped Godless Shrine and pass. And though Zafra’s 1/2 Tarmgoyf may have seemed good in the abstract, it was nothing compared to a Noble Hierarch–enabled Rhox War Monk. The Monk could single-handedly dismantle a Zoo deck on seven cards—let alone five. A despondent second ‘Goyf from Zafra and it was back to Levy. After the attack step, the totals became 11–21 for Levy, a position no Zoo deck likes to be in. Zafra was going to need some solid draws—and quickly.

Zafra tried to hang tough with a Tidehollow Sculler, but Levy calmly countered it, giving the ‘Goyfs +2/+2. The double ‘Goyf sunk Levy to 14 and passes back. Though the native Phillipino had the “I have Path to Exile“ one white mana untapped, with the help of Qasali Pridemage and Noble Hierarch, the powered-up War Monk swung for 5. Zarfa toyed with the land, tapping it and untapping it, but eventually took the damage.

It was getting bleaker for Zafra. Though he timed a sideboard Duergar Hedge-Mage to dismantle Levy’s Threads of Disloyalty, Levy simply replied with an Umezawa’s Jitte and attacked again with the War Monk. And this time it was pumped even more by a second Noble Hierarch. Zafra had to gang-block, which wiped his board, and though he tried to stabilize the next turn, the activated Treetop Village accepted exalted bonuses from his green friends and finished Zafra off.