vangelos “Van” Papatsarouchas’s fifth or six Pro Tour, and at 11–3 he was one win away from making it his first Pro Tour Top 8. Van hails from Greece and has been off and on the Tour since the first PT–Honolulu. He got back on for Austin through a PTQ. He jokes that his achievement this season was playing in 4 GPs, making Day 2 on all 4, and then finishing below 64th each time. This weekend he played his own version of Hypergenesis.

Standing in his way, also hungry for a shot at Sunday glory, is Brian Kibler, who started a meteoric 8-0 on Day 1 only to get sucker-punched in Draft 2 with an 0-3 result. Undaunted, he picked up his Grove Zoo deck (affectionately called “Big Naya,” among half a dozen other names) and rattled off three wins. 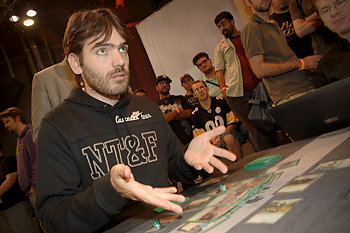 Evangelos Papatsarouchas would like to get a ‘What! What!’ Papatsarouchas succumbed to a double mulligan and faced early pressure from a first-turn Wild Nacatl. He played a Gemstone Mine.

Kibler played a Sacred Foundry untapped and hit for 3, but made no play. Papatsarouchas added Reflecting Pool and took a Punishing Fire to the face before Kibler buffed his Nacatl with Noble Heirarch and hit again. Van hit his third land, but had no cascade spell to call out Hypergenesis. He watched as Kibler added a fat Knight of the Reliquary. Another draw was enough to convince him to pack it in.

The two made some adjustments for the second game. Kibler swapped out his burn package for Meddling Mages, Ghost Quarters, and Blood Moons. Papatsarouchas traded out three Thirst for Knowledge and a Hypergenesis for two Putrefy, an Akroma, Angel of Wrath, and a Fungal Reaches.

“Can you kill me turn one this game?” – Brian Kibler

Now it was Kibler’s turn to mulligan. While shuffling, he remarked, “That was a pretty quick keep.” Van did his best to act innocent. Kibler’s six were no better. 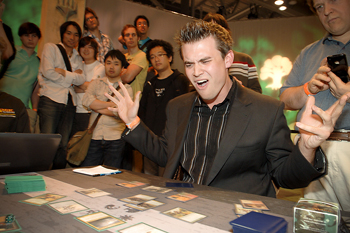 Brian Kibler is happy to oblige.

Kibler kept five and answered Van’s Reflecting Pool with Grove of the Burnwillows and Noble Heirarch. Van made lands while Kibler added Qasali Pridemage and then Wild Nacatl. At three lands, he pointed Demonic Dread at one of them and flipped a couple dozen cards looking for Hypergenesis. Kibler watched the big monsters go by: Angel of Despair; Sundering Titan; Akroma, Angel of Wrath; Bogardan Hellkite; and Progenitus.

Papatsarouchas started laying down his fatties. Sundering Titan, Sundering Titan, Progenitus. Kibler slammed down Baneslayer Angel and got ready to race. With two exalted creatures, he was draining for 7, with shades of his days putting Armadillo Cloak on Rith, the Awakener. He faced a choice and started doing some calculations, waving his arms around in simulated attacks and exchanges. Eventually he chose to pass the turn.

Van swung in with his monsters. Kibler made to hit with his Angel again, and Van showed him Putrefy.

“... Aren’t you at nine?” – Evangelos Papatsarouchas

For the final game, Papatsarouchas swapped out his Bogardan Hellkites for three Venser, Shaper Savant and an extra Firespout. Both players got to keep their starting seven, and Kibler was happy to lead out with Noble Heirarch, planning a turn-two Meddling Mage. Van drew his eighth card, then showed Kibler two Simian Spirit Guides, a land, and Demonic Dread.

“I’m not kidding. I don’t have a good hand, though. Just one creature ... one big one.” – Papatsarouchas

“Is it Progenitus? You have to tell me.” – Kibler

He put down his Akroma, Angel of Fury, and Kibler dropped Knight of the Reliquary, Tarmogoyf, and Meddling Mage naming Putrefy. Van closed it out with a Venser, Shaper Savant to bounce the Knight. Kibler untapped and replayed it, waiting for the red menace to swing in. Papatsarouchas obliged him, serving for 7 to leave him at 8.

Kibler attacked with Tarmogoyf and Mage, leaving Van at 15. His Knight searched up Ghost Quarter to kill Van’s red source, closing the door on a single-turn kill. Unfortunately, it meant that he was unable to do enough damage the following turn to kill Van. He gamely swung in and passed the turn, and Papatsarouchas simply said “Attack” to earn the handshake. 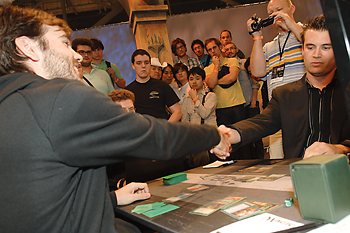 Afterwards, Kibler berated himself over his Game 2 loss. He could have cast Blood Moon the turn after Hypergenesis and ridden his Angel to victory. A nearby Marijn Lybaert pointed out that Kibler could’ve won Game 3 as well, explaining the need to attack with his Knight rather than search up Ghost Quarter.