Pro Tour–Austin Round 16: Looking for a Souvenir 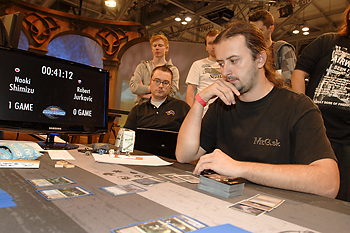 Robert Jurkovic of Slovakia is in with a win ...

ntering the final round of competition, Japanese player Naoki Shimizu sat down to lock horns with Slovakian Robert Jurkovic. Either player was “in with a win,” and the two settled in for a tough match. Robert had brought a version of the blue-black Dark Depths deck he had designed in conjunction with Czech star Martin Juza. The two had performed masterfully with the stack of 60 on the weekend (Juza was presumed to be a lock for Top 8 after Round 15). Shimizu was battling with an equally powerful strategy in the form of Dredge. The question was which player’s deck would be more powerful in this final round?

As Shimizu shuffled to prepare, he showed off the Pro Tour merchandise he had picked up over the years: a bag marked Hollywood, an emblazoned deck container from the city of Berlin, and so on. “I need to get something from Austin!” the plucky pro said with a smile. And if he wins this round, he’s got a shot at taking home a Pro Tour trophy.

Jurkovic remained silent, and looked a bit nervous under the bright lights of the stage. He showed no change in emotion as his opponent mulliganed.

Robert’s first play of the game was a Duress, but in a rare occurrence, the sorcery was very bad for him. He saw a Bridge from Below in his opponent’s hand as the only noncreature, nonland spell and had to send it to the bin. Shimizu, who had cast a first-turn Greenseeker, used the 1/1s ability on the upkeep of his second turn to fetch a Swamp, discarding Golgari Grave-Troll to do so and milling six cards on his draw step. In doing so, he flipped a Narcomoeba and a Dread Return. 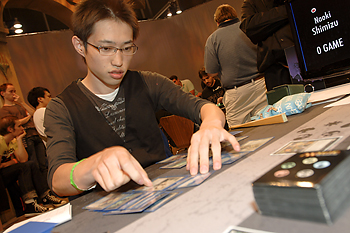 Jurkovic had a Dark Confidant for his second turn, and Shimizu was happy to repeat his upkeep Greenseeker activation for the second time in the game. That found him an Island, and his dredging of Golgari Grave-Troll found Iona, Shield of Emeria, Narcomoeba, and Flame-Kin Zealot. With Dread Return already in the pro’s graveyard, he could sacrifice three creatures to Dread Return the mythic Angel, then name either blue or black to lock Robert out of the match. He did exactly that after casting Magus of the Bazaar, choosing the color of the skull.

The top card of Robert’s deck was River of Tears, not the miracle-caliber solution he needed to crawl out of the game. Instead, he opted to concede to save the time of playing a hopeless game in order to have more for the match’s second and third games.

Both players kept their openers, and Jurkovic cast a first-turn Thoughtseize. Naoki’s hand contained two Verdant Catacombs, two Magus of the Bazaar, Darkblast, Ideas Unbound, and Hedron Crab. The Crab, which represented a first-turn source of dredge, was forced to the bin. Naoki played a Verdant Catacombs and passed the turn.

Because Naoki was holding Darkblast, Robert had to forego casting a second-turn Dark Confidant. Instead, he dropped an Underground River and passed the turn. He was holding Vampire Hexmage and Dark Depths, but he needed to play both of them in the same turn. Anything less would allow his opponent to break up the combo with the ‘Blast. Tapping out, Shimizu cast Magus of the Bazaar. 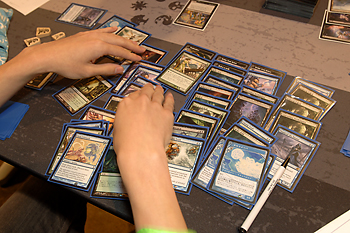 Deck check or game state? You decide!The Slovakian took advantage of the opening, dropping his Coldsnap legendary land and immediately making a 20/20 by way of Vampire Hexmage. Shimizu untapped and went into the tank. He needed a big solution, and he needed it on his turn or he was dead. He activated his Magus, discarding Golgari Grave-Troll, Verdant Catacombs, and Magus of the Bazaar. He dredged the Grave-Troll revealing Narcomoeba, Bridge from Below, and a second Golgari Grave-Troll. Shimizu was still in it! His Narcomoeba could block, and net him a token for its efforts. When Shimizu cast Echoing Truth targeting the 20/20 Marit Lage token, he made it apparent that the blocker was irrelevant.

That put the onus of taking initiative back on Robert. He cast a Dark Confidant, but shook his head disdainfully; the game, and thus the match (and thus his tournament life) was not looking positive. Naoki untapped and, using Magus of the Bazaar and Golgari Grave-Trolls, dredged all but a scant half dozen cards from his deck. He sacrificed three Narcomoebas to return Iona from the graveyard to the battlefield, set her to black, and created nine Zombie tokens. Even if Robert had a blue spell to deal with Iona, he’d need a second to deal with the horde of 2/2s. Robert nodded solemnly and accepted the fact that his run had come to an end. He extended his hand cordially and scooped up his deck. 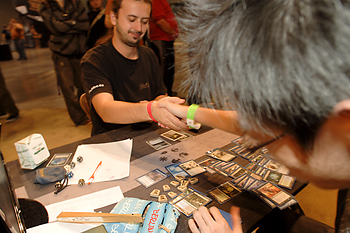