ack Hall is quietly becoming a Pro Tour fixture. With just seven PTs under his belt since Yokohama, he has moneyed consistently, and even posted a pair of Top 32 finishes. He's hoping to extend his streak this weekend, and is banking on his tweaked version of the Vampire Hexmage / Dark Depths deck to give him the boost he needs into the top tiers.

Sitting across from him this round was Gabriel Nassif, the erstwhile Yellowhat. Shocking no one, he's piloting a strange control brew packed with synergy. 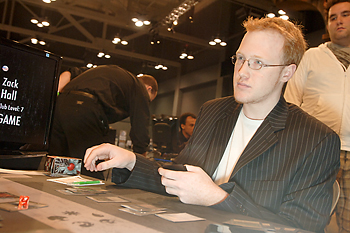 Hall led off with Thoughtseize, exposing all Nassif's secrets: two Mana Leaks, Gifts Ungiven, Firespout, and three lands, including Grove of the Burnwillows. He took the Gifts. After Nassif played a tapped Steam Vents, Hall added Urborg, Tomb of Yawgmoth and Dark Confidant.

Nassif sat back on Mana Leaks and took 2 from the Confidant, who had scored a free Verdant Catacombs for Hall. Nassif untapped and binned the Confidant with Firespout, but Hall had a replacement at the ready. He got another free fetch land and knocked Nassif to 14, then tapped two for Vampire Hexmage. Nassif thought for a moment, but allowed it. He used his four mana for an end-step Gifts Ungiven, frowning in concentration. Eventually he settled on Academy Ruins, Sword of the Meek, Thopter Foundry, and Life from the Loam.

Hall was ready, however. He put the Foundry and Ruins in the grumper and erased them forever with Shred Memory.

Nassif untapped and paused. Stuck on four mana, he Repealed the Confidant and passed the turn. Hall cast Chrome Mox with a Hexmage imprinted and transmuted Shred Memory into Grim Discovery. He tried the Confidant again, but it fell to Spell Snare. Nassif gassed up with Thirst for Discovery, discarding the Sword and played a freshly-drawn Island.

The slow blade of the Hexmage brought Nassif to 10, and Hall's Grim Discovery brought back the Confidant and a fetch land. Nassif played a sixth land, then transmuted Tolaria West into Ghost Quarter, sitting on three untapped lands and a full grip. Hall fetched again and resolved a fresh Dark Confidant. Nassif dropped Tormod's Crypt followed by an Engineered Explosives for two, clearing Hall's board.

Hall played another Hexmage, but now Nassif was rolling. Life from the Loam got him back his Tolaria West and a fetch land, and he transmuted into another Explosives. Another Thoughtseize stripped him of it, and showed both Leaks, Path to Exile, and Chrome Mox. Hall pushed on with Spoils of the Vault, naming Tidehollow Sculler. Five cards down, there it was. He cast it, and Nassif let it in. It stole Path to Exile.

Nassif untapped and set Hall back again, this time by dredging Life from the Loam, getting back Tolaria West, which got another Explosives, which blew up for two with help from Chrome Mox. Nassif was tapped out, but all Hall could muster was Dark Depths. Ghost Quarter took care of it on Nassif's turn.

Finally, Nassif showed he still had victory conditions: Punishing Fire. With two Grove of the Burnwillows out, he had access to a very slowly recurring 1 damage. He played it cagey, in case of Shred Memory, but soon found a third. Hall looked through his deck with Beseech the Queen, then scooped up his cards.

"That's a crazy deck you guys have," said Zack.

"What happens when they're playing Affinity or Zoo?"

"It's 50-50, something like that. Affinity after sideboard is pretty good."

"I just want to escape to Limited with three wins," said Zack.

"I don't know what I'm more excited about," replied Gab. "Constructed I guess."

Gabriel Nassif's Burnwillow Control deck might be the right prescription for the metagame, but side effects seem to include headaches.

Hall led with a turn-two Confidant again. Punishing Fire took care of it on Nassif's turn. The 1 life Hall gained from Grove of the Burnwillows was cold comfort. He replaced it with Hexmage. Nassif played a second Grove and passed it back.

Hall untapped and pointed Extirpate at Punishing Fire, and received a rude awakening. Despite split second, the mana ability of the Grove could put the triggered ability of Punishing Fire on the stack, saving it. Nassif took care of the Hexmage. Ghost Quarter left him with two Groves and an Island, and Loam brought it back for a return engagement. The second time around, Nassif had fetched Hallowed Fountain, and in response to the Quarter cast Thirst for Knowledge, discarding Engineered Explosives. He even had a second Island (snow-covered, of course) in his deck.

Hall was happy to keep playing the Strip Mine game and dredged Loam for another go. This time, Nassif stopped it with Mana Leak. He untapped and cast Meddling Mage, putting Loam on the bench. He also put out Thopter Foundry. Hall hit with his Hexmage and played Dark Depths. Nassif forced the use of the Hexmage with Punishing Fire, and Marit Lage showed up on the table.

Nassif was unconcerned. He had Path to Exile at the ready. Tolaria West got him Academy Ruins, and things were approaching silliness. Hall tried Tidehollow Sculler, but it was Spell Bursted. He couldn't keep up with all the free cards Nassif was getting. Thirst for Knowledge, this time discarding Chrome Mox, found Nassif Gifts Ungiven.

Hall was able to transmute for Grim Discovery, picking up both parts of his combo, but Nassif's Gifts showed him just how combos are done. Sword of the Meek, Repeal, Path to Exile and Cryptic Command. He got to keep the Sword and Path, but it really didn't matter where the Sword went. He untapped, played the Sword, and started making Thopters and gaining life, his Sword bouncing back after each sacrifice. Meloku never had it so good.

Soon he was coming over in the air for 10, and Hall was extending the hand.

Afterwards, they agreed that it was a nightmare matchup for Hall, despite his heavy disruption package. Nassif said that Hall's best bet might have been to just combo as aggressively as possible, and hope Nassif's deck had given him the wrong tools.