Pro Tour–Austin Round 5: The Real Feature

Two big names sat down at 3-0-1 in the last Constructed match of the day. On one side, 2006 Player of the Year Shouta Yasooka, playing White-Green-Blue Gifts, and on the other, PT–Honolulu Semifinalist and rogue deck designer Conley Woods.

“FAKE FEATURE!” –a nearby Brian Kibler, unhappy at being uncovered

“I hate fake features. They’re the worst. You’re all happy and then you get three words on Twitter.” –Conley Woods 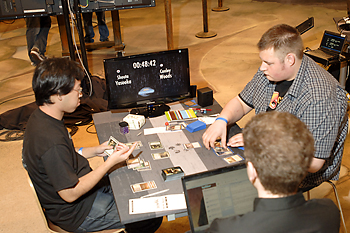 Woods kicked things off with Castigate, seeing a hand of Day of Judgment, Pulse of the Fields, Path to Exile, Rude Awakening, and Tarmogoyf. He took the Rude Awakening. Yasooka searched up a Temple Garden at end of turn with a fetch land and cast his Goyf. Woods passed on three mana and took 2, and Yasooka likewise made no play. Again Woods stood pat, but this time the charging Tarmogoyf got hit by Path to Exile. Yasooka had a replacement ready.

Another Castigate caught Yasooka with a third Tarmogoyf in hand. Woods took 3 from the Goyf on the table and watched as it was joined by Kitchen Finks. He put down a Martyr of Sands (inching towards enough Plains with Emeria already on the battlefield) and chump-blocked, gaining 3 by showing Wrath of God. He untapped and cast it, tidying the board a little.

Yasooka was on the back foot now. He swung for 2 but had no play. Woods, meanwhile, tapped six for Sorin Markov. The big vampire planeswalker took a bite out of the Finks, but Yasooka cashed in his Path to Exile for more mana. His draw was a Loxodon Hierarch. Woods dealt 2 to it with Sorin and then finished it off with Ajani Vengeant. Yasooka could do nothing but pass his turn.

Woods used Sorin’s Mindslaver ability and spent Yasooka’s turn getting rid of Pulse of the Fields and Wrath of God. Emeria got him back his Martyr on his upkeep. Now Ajani was locking out Yasooka’s only blue mana source. Yasooka got back his Heirarch at end of turn with Makeshift Mannequin and swung in, trying to kill off Ajani, but Woods had Path to Exile in hand. From there it was all over but the struggling. 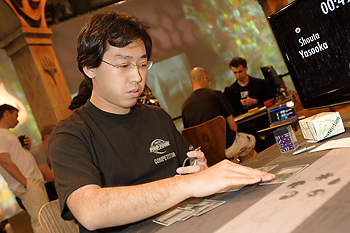 Yasooka lays the beats.After a mulligan from Woods, they were off. Yasooka was able to get his Tarmogoyf out ahead of Castigate. He turned over a juicy hand of Gifts Ungiven, Makeshift Mannequin, twe Engineered Explosives, and Ghost Quarter. Woods took the Mannequin and some damage, then put out a Martyr to chump and gain 6, showing Path to Exile and Ranger of Eos.

Next he tried a Phyrexian Arena. Yasooka Pathed his own Goyf to get to five mana he needed on his next turn to blow up the Arena with Explosives. Woods followed up with a Ranger for a pair of Martyrs, then hit and cast one of them when Yasooka did nothing on his turn.

Naturally, Yasooka was holding Gifts Ungiven. He presented Life from the Loam; Emeria, the Sky Ruin; Miren, the Moaning Well; and a Godless Shrine. He got to keep two of the lands, then dredged back the Loam to get the rest of them from his bin. Day of Judgment wiped the board and Woods gained 6 off his Martyr. He was, sadly, far from turning on his own Emeria. 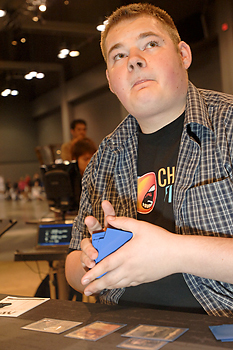 Woods shook his head as he sent back his first seven. His next six were worth keeping, but Yasooka decided he needed to go down to five, then cast Thoughtseize. Woods held Ghost Quarter, Plains, Phyrexian Arena, Ranger of Eos, and Extirpate. Woods played out his lands and waited.

Yasooka dropped a Witness on turn three, and Woods looked with dismay at his uncastable Extirpate. He untapped and Rangered up a pair of Martyrs, but Yasooka was firing on all cylinders. Gifts Ungiven got him Loxodon Heirarch and Duress, and put Cranial Extraction and Witness into the graveyard. He untapped and cast the Duress. Woods, finally with black mana, Extirpated all of Yasooka’s Gifts Ungivens, catching a second one in Yasooka’s hand and leaving him with Path to Exile, Thoughtseize, Makeshift Mannequin, Loxodon Hierarch, and Emeria, the Sky Ruin.

Then it was Duress’s turn to resolve. It took Phyrexian Arena and left Woods with Martyr and Path to Exile. Down came Loxodon Hierarch. Woods had no play, and traded Ranger of Eos and Martyr of Sands for the Hierarch. Yasooka passed it back.

Woods Castigated. Yasooka got a free Witness with Mannequin before losing it to Castigation. His hand was Pulse of the Fields, Path to Exile, and Thoughtseize. This he used on his turn, and Woods responded with Path to Exile on the non-mannequin Witness. Yasooka was slowly accumulating plains for his Emeria.

Woods topdecked an Emeria of his own, but had just five Plains and Ghost Quarter on the battlefield. Yasooka’s came online first, and Witness meant it was bringing back spells. First was Cranial Extraction for Sorin Markov. Woods fought back gamely as the clock ran out, both players keeping a brisk pace, but Yasooka’s tide could not be pushed back. As they went into extra turns, Yasooka was ready with lethal on board.

4 Martyr of Sands 1 Kagemaro, First to Suffer 2 Ranger of Eos

1 Yosei, the Morning Star 4 Path to Exile 3 Wrath of God 2 Day of Judgment 2 Pulse of the Fields 2 Condemn