At Pro Tour–Honolulu, Brian “the Dragonmaster” Kibler made a triumphant return to the Sunday stage after years had passed since his previous Top 8. Here in Austin, Kibler was in good position headed into the seventh round of the day undefeated, but he was facing stiff competition from Brazilian newcomer Paulo Cortez. 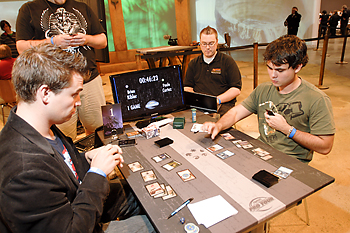 Brian Kibler and Paulo Cortez face off as part of the top draft pod.

Like his American opponent, Cortez was also undefeated, but he had a rough opening few turns as he cast a Kraken Hatchling but then missed a land drop. 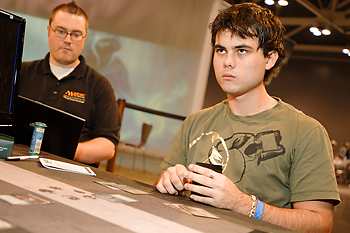 Missed land drops plagued Cortez in Game 1.Kibler cast Soul Stair Expedition followed in short order by Goblin Shortcutter and Goblin Ruinblaster, allowing an attack for 2. He gave no indication whether he was pleased to see his opponent miss yet another land drop on the fourth turn. Instead, he tried to capitalize with a Nimana Sell-Sword, and Paulo missed yet another land drop. When land continued to be missing from his draw steps, Paulo conceded the game.

“I’m not going to lie, I wouldn’t mind if you did that again ....” Brian casually mentioned to Kibler as they shuffled for the second game of their match.

Paulo opened up on a mulligan for the second game in the match, and Kibler couldn’t help himself: “I live a helluva charmed life!”

Cortez took a gander at six and, with two lands and an Expedition Map, was happy to keep. He opened on Akoum Refuge followed by his Map while Kibler worked on getting an offense going with Vampire Hexmage—a killer combo piece in the Extended rounds, but here mostly just a 2/1 first striker. 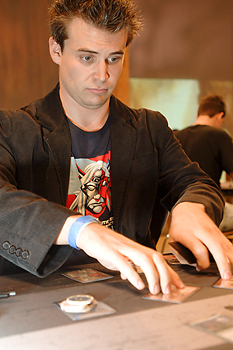 Kibler's steady stream of attackers did in Cortez.The 2/1 drew first blood dropping Cortez to 19 after he had gained a life from the Akoum Refuge. Merfolk Seastalkers hit the table for the Brazilian, but Brian made short work of them with a Gatekeeper of Malakir. Cortez just fired back with a second copy of the 2/3, but it wasn’t able to block as Kibler plopped a Tuktuk Grunts onto the battlefield and turned it sideways.

Stalling to stay in the game so he could start overpowering his opponent with powerful spells, Paulo tried to clutter the battlefield with a Sky Ruin Drake. The 2/5 was a difficult threat for Kibler to push through, but he turned his team sideways without a hint of trepidation. When the 2/5 flier moved in front of Gatekeeper, Kibler revealed Slaughter Cry to take the creature out. Post-combat Cortez was at 9 with just a Merfolk Seastalkers to protect himself.

He had no spells on his turn, but did give himself access to six mana, enough to activate his tapper twice. Kibler moved to attack with his team, but Paulo activated Merfolk Seastalkers targeting Tuktuk Grunts. Brian responded with Hideous End on the blue creature. The spell resolved successfully, but not before Cortez tapped a second creature. With the turn back, he cast Khalni Gem, returning his Akoum Refuge and re-playing it.

Kibler sent his team to the red zone, and Cortez cast Hideous End targeting the Grunts. When Kibler responded with Vampire’s Bite targeting his Hexmage, Cortez was done. He nodded solemnly, then extended his hand with a smile.