Pro Tour–Austin Round 8: Thick as Thieves

Brian Kibler continues to solidify his bid for induction in the Hall of Fame Class of 2010. After a Top 8 in Honolulu (where he 8-0ed Day One) he’s on pace to repeat here in Austin. Meanwhile, Paulo Vitor Damo da Rosa is also accumulating laurels for when he becomes eligible for the Hall in 2012. He’s the reigning Brazilian National Champion, and he put up back-to-back GP Top 8s this season. Now they would fight to see who would be the lone Day One undefeated. 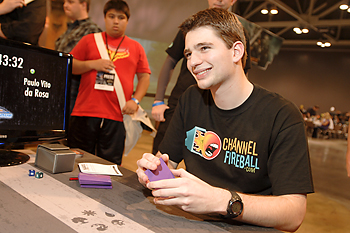 Paulo Vitor Damo da Rosa ALWAYS draws Bala Ged Thief...Paulo started with a Surrakar Marauder, quickly outclassed by Kibler’s Vampire Hexmage. He added a Blood Seeker to the table and traded his Marauder for an incoming Goblin Ruinblaster. Four land let him have Bala Ged Thief, stealing a card from Kibler’s hand. Kibler made no play on four lands.

Paulo untapped and dropped Stonework Puma, triggering the Thief again. Kibler let it hit play and gave it a Hideous End so he could choose his discard. He picked Magma Rift. He untapped and kicked Torch Slinger to put the Thief in the bin before things could get really out of hand, then hit with his Vampire Hexmage. Paulo made a Goblin Ruinblaster of his own and got in for 2, then cast Trusty Machete.

Kibler kept the pressure up, swinging for 4, leaving Paulo at 12. He cast a Nimana Sellsword. Paulo’s Ruinblaster picked up the Machete and hit for 4, bringing Kibler to eleven. Unfortunately, all he had to add to the table was another Stonework Puma.

Kibler poured it on with Tuktuk Grunts, powering up his Sellsword and charging in. Paulo teamed up on the Hexmage with his two creatures, losing the Puma. All he had back was another Surrakar, and when Kibler showed him Disfigure, he packed up his cards.

Things did not go as well for Kibler at the start of Game 2. He went down to six cards, then had to make it five. Paulo cracked a Scalding Tarn and got it back with Grim Discovery, not able to wait out the inevitable card advantage. He followed up with a Surrakar Marauder, which Kibler shut down with Giant Scorpion.

Paulo punished him further with Bala Ged Thief, forcing a Swamp out of his hand. Kibler made a Nimana Sellsword and was sitting pretty with another in hand, but the Paulo tapped five and cast Hagra Diabolist, stealing the Sellsword and showing he had just Swamp left in hand.

“It was such a good five-card hand, too,” said Kibler

Kibler attacked with the Sellsword, and Paulo was happy to trade it for his Diabolist, which he replaced with Bog Tatters. Kibler’s deck decided to continue its kindness with a Crypt Ripper to go with his many Swamps.

The Tatters hit for four and were joined by a second Surrakar. Kibler hit back with his Ripper for 5, then played a Mountain and showing just how kind his draws had been with a Magma Rift to kill the swampwalker.

Unfortunately, Kibler was still behind on action, and pushed further back by Heartstabber Mosquito, killing the Scorpion and clearing a path for 6 damage to leave Kibler at 8. Kibler gamely swung back for 2, hoping that his Tuktuk Grunts would stick. Paulo flashed him a spell, and they were on to Game 3. 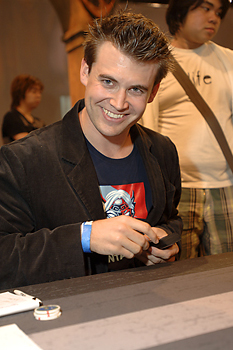 ... but in the end it is Brian Kibler who steals the show, walking away from Day One as the only undefeated player.The first play was Kibler’s Vampire Hexmage, which came a turn late to the party. Paulo cracked his Scalding Tarn for the Mountain he needed and played Hellfire Mongrel. The tardy hits kept coming for Kibler, this time Vampire Nighthawk. Paulo tapped four, and naturally, had Bala Ged Thief.

“ALWAYS have him,” said Kibler with a smile. “Let me think.”

Eventually, Damo da Rosa made his choice. “This is so painful,” said Kibler, ditching Mind Sludge.

He untapped and dropped Tuktuk Grunts, sending the whole team. Paulo’s creatures ganged up on the Hexmage, and Paulo fell to 12. All he could muster on the defense side was Blood Seeker. Worse, Kibler wasn’t out of hasty threats, adding Crypt Ripper to mix. He swung with all and got through, pumping his Crypt Ripper to 4/4 but losing his Tuktuk Grunts to Hideous End.

Paulo looked over his options, not liking what he saw. He turned his Hellfire Mongrel sideways and played Bog Tatters. Kibler untapped and swung, his Crypt Ripper running over Damo da Rosa’s Blood Seeker. He tapped three and kicked up Gatekeeper of Malakir to keep Bog Tatters at home. A Magma Rift later, and it was all over.