Pro Tour–Austin Round 9: Number One Card

obody had to tell these two that they'd be fighting in the Arena this round. Kibler's pure 8-0 start and Watanabe's 7-0-1 meant they'd be paired up, and everyone wants to see the undefeateds duke it out. Both were excited about their decks, and anticipated a repeat of their Draft 1 sweep. Kibler had an aggressive red-black deck, his favorite archetype in the format. Watanabe was green-blue. 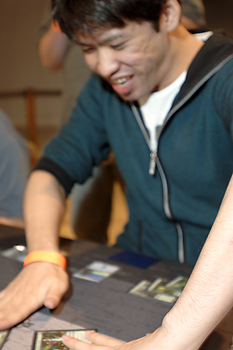 Kibler won the die roll and led off with Vampire Lacerator. Luckily for Watanabe, he had no two- or three- drops to follow up. On his end step, Watanabe sent the Vampire back with Into the Roil, buying still more time. He untapped and casting a Greenweaver Druid. Kibler got back on the board with Bladetusk Boar.

Watanabe dropped the game-changer: A turn-four Baloth Woodcrasher. Kibler comically raised his eyebrows, then put on a concerned frown. He hit for another 3 and spilled out Nimana Sellsword and the Lacerator.

Unfortunately for him, Watanabe seemed to have all the right tools. Next up was Grazing Gladehart, and then landfall to smash in for 8 with the big, bad Baloth. He played a second Greenweaver Druid and passed the turn. Kibler hit with his Boar and played Crypt Ripper, holding two mana up, but it was all bad news. Not only did Watanabe have another land to turn on his Baloth, he also had Eldrazi Monument.

Watanabe grinned, and turned all his men sideways with a "Raar!"

The Eldrazi Monument had actually been passed to Kibler second, and despite his many practice drafts, he had never played with or against the mythic rare. He could tell from reading it that it looked insane, but between not knowing for sure, his experience that the format involved a lot of creature trades and few cluttered boards, and the presence of the always-excellent Disfigure in the pack, he decided to ship it. In his words earlier, "I don't think you'll have enough creatures for it to just be Overrun."

"Well ... it was certainly Overrun there!" 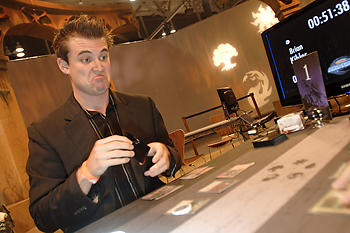 Kibler mulliganed and kept six. He opened with Guul Draz Vampire, and then Giant Scorpion. Watanabe had Greenweaver Druid for turn three, but Kibler turned up the heat with late arrivals Vampire Lacerator and Blood Seeker. Watanabe did some quick counts and then laid out Grazing Gladehart, a land, and Oran-Rief Recluse.

Kibler swung in with his Lacerator and Giant Scorpion, and pushed through the Recluse with Vampire's Bite. Watanabe played another land, bringing his mana count up to seven, but simply passed the turn.

"You got Cobra Trap for me here? What are you trapping me with?"

He puzzled over what was in store for him, then shrugged and swung with Scorpion and Lacerator. Watanabe let them both in, and Kibler let out a sigh of relief. His expression changed to puzzlement when Watanabe cast Cobra Trap on his end step. Watanabe took 4 from Blood Seeker, then untapped and undid the damage with Harrow.

"My 'bloodied' theme is not working." – Brian Kibler

That was the least of his worries. Down came the Monument, and Watanabe's weenies charged. Kibler did a quick count.

This left him at four, and his Lacerator got in a final insult, pinging him to three. Kibler extended the hand.

Afterwards they shared a laugh over the ridiculousness of the Monument.

"This is the Number One Card." – Yuuya Watanabe