Pro Tour–Austin Round 9: Steppe Up 2: The Lynx 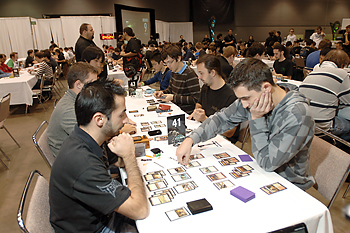 Juza and Levy fight among the people. No arena necessary!

t's always a good sign when you sit down for a draft, take a good card as your first pick, and then get another copy of that card later on. Martin Juza's first-pick Inferno Trap had a twin in his second pack, giving him Double Inferno Power. Raphaël Lévy started his draft off with a Kazandu Blademaster, which also came to him as his second card from his third pack. Levy also ended up with a pair of Shepherd of the Losts, courtesy of the third pick in his first pack and the first pick in his second pack. This battle between the fourth and fifth players in the standings could well decide who gets into the Top 8 at the end of the day. Or it might not. Frankly, the only way to tell is to play the game.

When the round started, the usual start-of-day bookkeeping meant that there was a delay before the feature matches were announced. By the time everyone realized that the round was starting without the arena being full, Juza and Levy had already started playing. These guys are all business! So that meant that instead of playing in the arena, Juza and Levy played at glamorous Table 41. Okay, Table 41 hasn't previously been known as being a particularly prestigious place to play, but there's no reason that couldn't change. 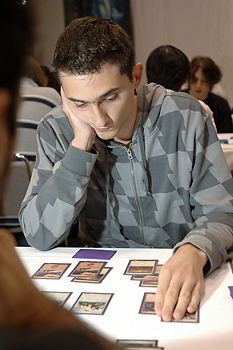 Juza started with a pair of Steppe Lynxes to Levy's Ondu Cleric and Makindi Shieldmate. A Slaughter Cry took care of the Shieldmate, who had unwisely decided to block, but the Ondu Cleric picked up some Adventuring Gear and swung in for 3.

Both players made their landfalls, with Juza adding a Zektar Shrine Expedition to his land-enhanced forces. Levy got out a Shepherd of the Lost, which was not enough to dissuade the Steppe Lynxes from attacking. When Levy didn't block, the Arid Mesa pumped the Lynxes up even further. Levy moved his Adventuring Gear onto the Shepherd and attacked for serious damage before casting a Blademaster and gaining some much-needed life from his Ondu Cleric.

Juza got out a Geyser Glider and a Shepherd of the Lost of his own. He had to reach across the table and read Levy's Emeria, the Sky Ruin to determine that it required seven Plains in play before pronouncing his judgment on it: "That card is so bad!"

Levy just responded with a Gallic shrug. Not only was he at 8 life, but his opponent was cracking wise about his cards.

After playing a land, Juza considered an all-out attack, which would involve both Steppe Lynxes, a Geyser Glider, and a Shepherd of the Lost (and possibly a 7/1 Elemental if he chose to employ his fully charged Zektar Shrine Expedition), but finally just attacked with the Shepherd of the Lost and the Geyser Glider in the air. As Levy considered his options, Juza waited tensely. Or as tensely as Juza ever gets, which isn't all that much.

Levy took the damage and went to 1, after which Juza played a Blazing Torch and threw it in his face for the win.

Levy agonized over his initial hand, calling it a killer decision. Finally, he traded in a great hand (except for the part where it had only one land) for six cards. He shrugged again and kept.

Turn one for each player showed landfall cards again. Levy's Adventuring Gear vs. Steppe Lynx. Then the landfall plan appeared to stall out, since neither player played a land on turn two, although Juza played out a second Lynx. Juza then revealed that he'd actually held back his second land drop on purpose, preferring to use his land drops to benefit the maximum number of Steppe Lynxes. For the rest of the game, Juza would not miss a land drop. On his third turn, he played a Plains and a Kor Aeronaut before attacking for 4. 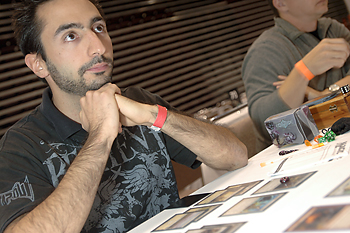 Levy had trouble getting moving, casting a Kor Skyfisher and a Kazandu Blademaster while Juza played an Arid Mesa and a Mountain, allowing him to consistently attack for 4 damage while threatening a sudden Lynx explosion via the fetchland. When Juza cashed in his Arid Mesa, he played the mighty Pillarfield Ox. At this point, Levy still had only a Plains and a Kabira Crossroads as his land.

Levy's third land gave him access to a Makandi Shieldmate, beefing up his Kazandu Blademaster. But he was still back on his heels and was in no position to start making aggressive moves. And after Levy's Kor Skyfisher got Inferno Trapped, the only remaining flier was Juza's Kor Aeronaut, who took Levy to 6 life. Levy promptly played an Ondu Cleric, going up to 9. At this point, Levy's Kazandu Blademaster had three +1/+1 counters and his Makindi Shieldmate had two.

Levy thought awhile before putting Adventuring Gear on his Blademaster and cast a fourth Ally, gaining a token amount of life before conceding to Juza's flying force of extraordinary magnitude.