Naoki Shimizu is no stranger to Sunday play, but most of the time enjoys it as a reporter for the Japanese side of our website. This weekend he was in the thick of it, and steered his Dredge deck all the way to the Top 8. Now he’s facing off against countryman and cowpoke Tsuyoshi Ikeda, himself fresh off a Grand Prix win in Niigata. He is playing his own take on Zoo, notably packing a full quota of Spectral Procession. Neither player would admit to an advantage as they shuffled up and began. 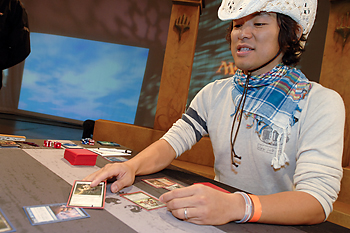 Tsuyoshi Ikeda is fixin’ to say howdy to a Pro Tour Finals opponent.Ikeda fetched Temple Garden with Verdant Catacombs and cast Wild Nacatl. Shimizu’s first turn was less straightforward. He leaned forward in his chair, head in hand, before settling on a tapped Watery Grave. Ikeda played Arid Mesa and considered his options. Eventually he swung for 2, content to sit back.

Shimizu played Hedron Crab and then Verdant Catacombs. Ikeda made the mistake of responding to the landfall trigger with Path to Exile, allowing Shimizu to break the Catacombs in response to get Watery Grave, putting another trigger on the stack before the Crab would be exiled. Path gave him a Forest, and he filled his graveyard with Dryad Arbor, Bridge from Below, Hedron Crab, two Golgari Grave-Troll, and a land. Shimizu used his Forest for a Greenseeker.

Ikeda searched up Plains at end of turn, then played an untapped Sacred Foundry, attacking for 3. Shimizu did not block. Ikeda considered casting a spell, but chose to pass it back instead. Shimizu dredged his Golgari Grave-Troll, putting more goodies in the graveyard, including another Troll and Bloodghast. The slow game was suiting him just fine. He got the Bloodghast onto the battlefield and added a Magus of the Bazaar.

Ikeda attacked again. This time Greenseeker stepped in the way, trading a Troll in hand for a Swamp before dying. Again Ikeda held back, watching Shimizu dredge again, putting more creatures in the graveyard. Then the Magus let him keep going, finally getting Bridge from Below, Narcomoeba, Flame-Kin Zealot, Dread Return, and Sphinx of Lost Truths.

Shimizu had all the pieces ready. He flashed back Dread Return on Flame-Kin Zealot, sacrificing his three creatures, but Ikeda had Lightning Helix to kill his own Wild Nacatl, exiling the Bridges.

Unfortunately for Ikeda, Shimizu was hardly finished. He played a land, bringing back Bloodghast, then cast the Dread Return in his hand targeting Sphinx of Lost Truths. This let him dredge twice more, serving up a Bridge, two Narcomoebas, and a crucial third Dread Return. Now he was free to flash back the second Dread Return, getting Flame-Kin Zealot back into the graveyard, and then the third to get it back out again, giving his army of Zombies haste for the win.

Both players went to their sideboards. Ikeda shelved four Spectral Procession, three Knight of the Reliquary, and Umezawa’s Jitte in favor of three Ravenous Trap, three Volcanic Fallout and two Countryside Crusher. For his part, Shimizu got rid of three Magus of the Bazaar, a Sphinx of Lost Truths, a Bloodghast, a Dread Return, and a Flame-Kin Zealot for three Tombstalker, three Thoughtseize and a Darkblast. 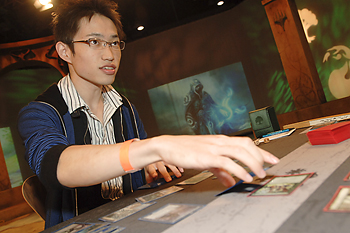 Naoki Shimizu is perhaps less eccentric than his countryman, but no less stylish.Both players mulliganed to six. Ikeda made a face but kept his six. Shimizu also agonized a moment, but chose to keep.

Ikeda led with Treetop Village. Shimizu played a Misty Rainforest, but sent it back. Ikeda also chose not to crack his fetch land, a Verdant Catacombs, and after attacking for 1, passed his turn. Shimizu had no second land and quickly passed. Ikeda sacrificed his fetchland, and in response Shimizu searched up a Watery Grave and Darkblasted the Nacatl.

Ikeda got Stomping Ground with Verdant Catacombs, then untapped and made a Countryside Crusher. Shimizu still had no land, and played out Hedron Crab. Ikeda’s Crusher revealed that he would draw Lightning Helix, and after digging out a Temple Garden, he Lightning Bolted the Crab, turned on his Treetop Village, and swung in. When Shimizu still didn’t find land, he scooped up his cards.

On the play, Shimizu swapped his Magi back in for the three Thoughtseizes.

Again Shimizu was forced down to six cards, but Ikeda was pleased with his seven. Shimizu’s six were slightly better than last game. After Ikeda opened with Verdant Catacombs into Stomping Ground into Wild Nacatl, Shimizu was happy to cast Hedron Crab, then sacrifice a Catacombs of his own for a tapped Watery Grave and six cards in the bin: Narcomoeba, Golgari Grave-Troll, Darkblast, Stinkweed Imp, and two lands.

Ikeda played an untapped Sacred Foundry and hit for 3. He considered his next move carefully. Eventually he settled on Tarmogoyf. Shimizu dredged Stinkweed Imp, getting Life from the Loam, Bridge from Below, and three land into his graveyard. A Swamp let his Crab add Life from the Loam, Greenseeker, and Magus of the Bazaar to the ‘yard. He cast his Imp and ended his turn.

Ikeda untapped and played Path to Exile on the Imp, giving Shimizu an Island and three more Crab cards: Tombstalker, Golgari Grave-Troll, and a land. He swung in, and Narcomoeba chumped to upgrade to a Zombie token.

Shimizu considered his draw step. Eventually, he chose not to dredge. He played a land and milled three cards from Ikeda’s deck, then three more, including Ravenous Trap. He tapped five for his Grave-Troll, a 6/6. He swung with his zombie token for two. Ikeda re-counted his Tarmogoyf, a 5/6. He added Kird Ape to the table and passed it back.

Now Shimizu was happy to dredge up a second Troll, milling a Dread Return and other goodies from his own deck. He played a second Crab and ended his turn. Ikeda Path to Exiled the Golgari Grave-Troll, but Shimizu was out of basic lands. Ikeda bashed in with Tarmogoyf, Kird Ape, and Wild Nacatl, and Shimizu cashed in both Crabs for zombies.

He untapped and attacked with two of his three undead, then tapped out for a 10/10 Golgari Grave-Troll. Ikeda wasted no time playing an end-of-turn Volcanic Fallout, then untapping and showing the Lightning Helix that would put his attack over the top. 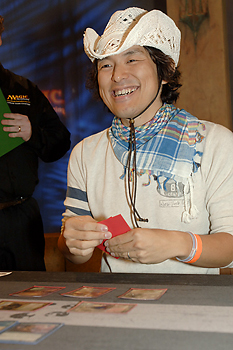 Ikeda keeps the match personable.After a quick mulligan from Ikeda, they were off. Shimizu started with a tapped Breeding Pool. Ikeda made an untapped Sacred Foundry and passed, his finger on the trigger. Shimizu traded a Misty Rainforest for an untapped Watery Grave and paused.

He tapped two, considering a Magus of the Bazaar, then deciding on Ideas Unbound. He discarded Darkblast, Golgari Grave-Troll, and Magus of the Bazaar. Ikeda answered with Tarmogoyf. Shimizu dredged his Troll into four land, Ideas Unbound, and Narcomoeba. He played two Hedron Crabs, then a Misty Rainforest for a tapped Watery Grave. He milled himself for twelve cards, including Golgari Grave-Troll, two Bridge from Below, Narcomoeba, and Dread Return as well as a few other creatures.

Unfortunately for him, Ikeda had a trap to spring.

Ravenous Trap devoured Shimizu’s graveyard, shrinking the Tarmogoyf considerably in the process. Qasali Pridemage meant the ‘Goyf could attack at 2/3 past the pair of Narcomoebas, though. Shimizu made a Magus of the Bazaar in an attempt to recharge his graveyard and hit for one in the air with his jellyfish.

Ikeda turned both his men sideways. Shimizu put a Hedron Crab in front of the small Tarmogoyf, but Ikeda had Lightning Helix, killing the Magus and upsizing his ‘Goyf. Shimizu was right back where he started. His draw step was little help; he could only cast a blank Life from the Loam to get it into his graveyard for dredging. Ikeda’s next attack forced another chump block.

Shimizu dredged into Stinkweed Imp, another Life from the Loam, and Ideas Unbound. Not much help. All he could do was cast a Narcomoeba to get in the way, but Ikeda wasn’t prepared to allow even that much. Volcanic Fallout swept the board and the Tarmogoyf charged, bringing Shimizu to 5.

Shimizu dredged the Imp, hoping for a miracle. It was not forthcoming. Ikeda showed him burn in hand, and Shimizu conceded.

Tsuyoshi Ikeda defeats Naoki Shimizu 3-1 and advances to the Finals! 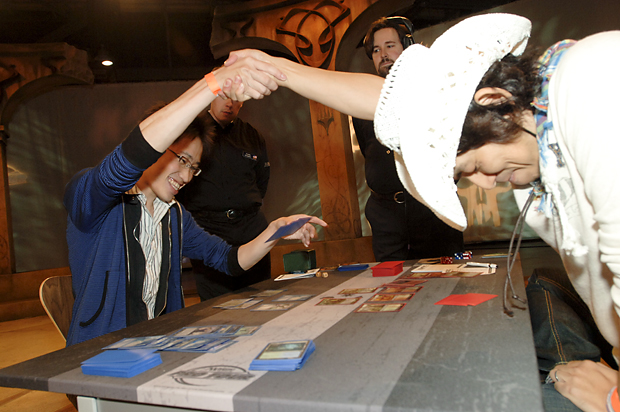