Brian Kibler is a longtime pro and Magic personality who shocked the world by going 8-0 at Pro Tour–Honolulu earlier this season, capping the event with a Top 8. When he started off with the exact same record this weekend, the world held its breath to see if he could repeat. He did exactly that, and was favored in the Semifinals after squeaking out a win one round before. Hunter Burton, however, had a story of his own. A lifelong Texan, Burton was looking to defend the Pro Tour title after it returned to his home stomping ground. Could he overcome being in a Baneslayer Angel / Punishing Fire–sized hole? 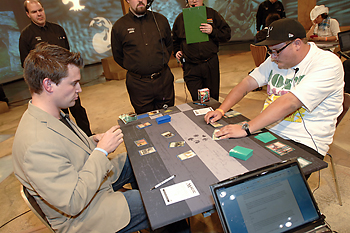 Brian Kibler and Hunter Burton to see who will represent the U.S. in the final match of Pro Tour–Austin.Burton won the die roll but didn’t have a first-turn creature. Instead, he cracked Verdant Catacombs to find Sacred Foundry. While shuffling his deck, he realized he couldn’t actually make that play, as the Foundry was neither a Forest nor a Swamp. He put the land back, got Stomping Ground instead, and went back to shuffling.

“Well, at least you didn’t have first-turn Noble Hierarch,” said Burton. “That’s step one for me winning this match.”

“Yeah, it’s the best creature in my deck. I run three,” Kibler deadpanned, after also not having a spell for the first turn.

Burton had a Tarmogoyf for the second turn, but his opponent dealt with the creature via Lightning Bolt, then untapped and cast Noble Hierarch. Kibler was using his fetch lands very carefully, retrieving basic lands to avoid being pinged by his opponent’s Molten Rains. He changed that tune, sacrificing a Marsh Flats to find a Sacred Foundry, then cast Knight of the Reliquary. The three-drop was a massive 6-power monster, but Hunter fired right back with a copy of his own, albeit a slimmer 4/4 model.

Lightning Helix and Punishing Fire combined to deal with Hunter’s Knight, and Brian’s Knight of the Reliquary rumbled in for a whopping 8. Hunter fell to 6, then drew for the turn. He flipped over a bevy of lands and conceded to the huge threat with a smile.

Wild Nacatl hit the battlefield on Hunter Burton’s first turn, and the Texan, who had been a bit gloomy about his prospects in the match after the first duel, had seemed to lighten dramatically. “I think I can actually win this game!” he said.

Kibler had Grove of the Burnwillows for his turn, but no Noble Hierarch. 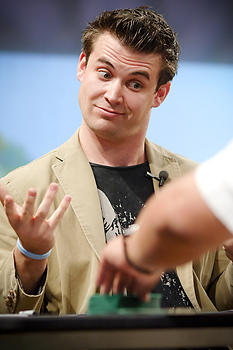 Would I lie to you? “Yep, I actually have a shot this game,” Burton said. Kibler used Lightning Bolt to kill the 3/3 Nacatl when Hunter attacked.

Qasali Pridemage hopped onto the board for Kibler, but it seemed small in size compared to the 3/4 Tarmogoyf Burton had cast. Burton followed up his ‘Goyf with a second Wild Nacatl. Kibler sent his Pridemage in to ding his opponent for 3, but passed the turn back with no other plays. A Lightning Helix from Hunter, aimed at Kibler’s head, undid the attack damage and increased the speed of the Texan’s clock. He sent his whole team into the red zone upon receiving the turn back.

Kibler used a second Lightning Bolt to kill the second Wild Nacatl, then a third to do the same thing after Hunter re-upped with yet another copy of the Shards of Alara one-drop.

“I feel like you’re tricking me,” Hunter said to his opponent, as he continued bashing with his Tarmogoyf while Kibler built his mana base but cast relatively little. Kibler had no response, but his hand of four lands revealed he was simply very mana flooded. When he sacrificed a fetch land to reduce the likelihood of drawing yet another land, Hunter revealed Lightnig Helix. Kibler nodded, having fallen to 3 from his land activation.

“Oh my god, we won a game!” Hunter exclaimed.

The two bantered back and forth before the third game, with Hunter laying out his game plan of “hoping Kibler gets screwed.”

As if on cue, Brian announced a mulligan while on the play; Hunter kept his opening seven. When Brian’s second hand had only a Treetop Village for lands, he shipped that back as well. Could Hunter Burton ride tight play and good fortune out of an uphill battle in the Semifinals? “This’ll do,” said Kibler, keeping his five.

Neither player had action on his first turn beyond lands that entered the battlefield tapped, Treetop Village for Kibler and Sacred Foundry for Burton. A Tarmogoyf for Burton started as a 0/1 but became a 2/3 the following turn as he cracked an Arid Mesa and used Molten Rain to blow up his opponent’s Stomping Ground. Brian responded by tapping the land for mana, then using an Arid Mesa of his own to find a Plains. That gave him enough mana to activate his Treetop Village, which forced the ‘Goyf to stay home. 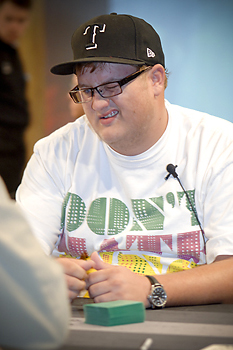 Maybe if I squint ....Brian had another land, making it look like he hadn’t even mulliganed, but Hunter had a second Molten Rain on his turn, this time targeting Treetop Village. Kibler allowed that to resolve, though he could have activated his Treetop Village and used Path to Exile on his own 3/3 in order to replace the land. Instead, he sent the instant at his opponent’s Tarmogoyf, taking no combat damage for the turn. Burton had a post-attack Kird Ape, and passed back to his opponent.

Kibler managed to cast a Knight of the Reliquary, which was a considerable size thanks to his opponent’s Molten Rains. Burton had a third Molten Rain on his turn, leaving Kibler on just two lands, and also cast Plated Geopede before playing a Treetop Village. It was dire straights for Brian Kibler, but he found a 3/4 Tarmogoyf waiting for him on the top of his deck, which would help dramatically as a blocker.

“How big is your Knight?” Burton inquired.

Unable to attack profitably, Hunter was forced to pass the turn without playing anything, and the tides turned every so slightly in Brian’s favor. The veteran pro started doing some math, trying to figure out if he should activate his Knight of the Reliquary for a land or not. The answer he came up with was yes, trading a Forest in for a Grove of the Burnwillows at the end of Hunter’s turn. With three Molten Rains in the Texan’s graveyard, the Grove was relatively unlikely to be blown up.

Kibler drew Noble Hierarch and cast it, cushioned from a big attack by a Path to Exile in his hand. He crashed in with a 10/10 Knight, which Burton soaked up to fall to 8. With the turn back, Burton started figuring out how to attack. He played a land to pump his Treetop Village, then attacked with the creature-land and Plated Geopede. Kibler bocked the Village with Tarmogoyf and used Path to Exile on the ‘Pede. That meant he took 0 damage and dealt with his opponent’s largest threats. Burton used Lightning Helix to finish off the Tarmogoyf, but had to immediately begin chump-blocking Knight of the Reliquary. Kibler cast a Wild Nacatl to help with blocking and attacking, but was able to finish Burton off a turn later with the help of a Punishing Fire.

“That was the game where I mulliganed twice and you had three Molten Rains!” Kibler exclaimed. 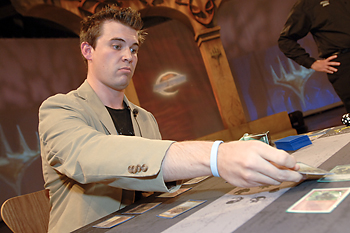 Kibler extends the hand, but not to shake ....It was Burton’s turn to start with a mulligan, but he seemed excited about his second hand. Kird Ape was followed by a 1/2 Tarmogoyf, while Brian Kibler had only lands to start with. At three mana, Burton had Molten Rain for his opponent’s Sacred Foundry, but Brian responded with Path to Exile on his opponent’s Tarmogoyf. He took 2 from Kird Ape, then cashed in a Marsh Flats to find a Temple Garden.

That allowed him to drop Noble Hierarch, but Burton fired back with fatties. Knight of the Reliquary came first as a 3/3 that threatened to go much larger. Brian aced it with Path to Exile, and Burton followed up with Tarmogoyf. The 4/5 was no match for an attacking Qasali Pridemage from Kibler, who had cast the 2/2 as well as a second Noble Hierarch. That meant Pridemage was a monstrous 5/5 thanks to exalted on attack, and Hunter took the damage falling to 6.

He fired back with an attack of his own to take Kibler to 7, then used Lightning Bolt to blow up the Pridemage before it could attack again. Brian had five lands and a Noble Hierarch on the battlefield, and used the 0/1 Druid to block his opponent’s Tarmogoyf. He countered a Molten Rain from Burton by using Ghost Quarter to blow up his own Stomping Ground in response. That allowed him to fetch up a basic land, but in a repeat of the only game he had lost in the match, Kibler seemed to be getting flooded again.

Things got worse as Brian activated Marsh Flats only to find he had no legal lands left to search out. When he peeled yet another blank from the top of his deck, the two Americans in the Top 8 headed to the rubber game. 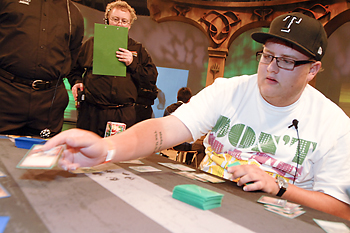 ... and Burton does the same ....There were no mulligans in the decider, and Steppe Lynx made a first-time appearance in the match for Hunter Burton. It was quickly destroyed by a Punishing Fire from Kibler, but Hunter cast a second just a turn later, alongside Wild Nacatl. If Kibler didn’t keep his opponent’s early aggression under control, he was going to have an uphill battle to fight.

A second Punishing Fire blew up the Lynx, and Kibler cast Noble Hierarch, one mana shy of Baneslayer Angel. Not about to let the 5/5 take flight without a fight, Burton used Lightning Bolt, turning the tables and killing his opponent’s 0/1. Wild Nacatl punched through to put Brian at 13, and Burton continued developing with a Tarmogoyf. Kibler fired right back with an oversized green creature of his own in the form of a 4/4 Knight of the Reliquary.

Wild Nacatl rumbled in to the red zone, and Burton played a Scalding Tarn alongside Kird Ape. Kibler being able to untap with his Knight on the battlefield boded very well for him. He wasted no time in casting the Elspeth, Knight-Errant sitting in his hand, making a 1/1 Soldier. With a Lightning Bolt in reserve, he was sitting pretty.

Burton, sensing the tides turning against him, sent his entire team to the red zone. His opponent verified the Tarmogoyf was 3/4, then blocked it with his Knight of the Reliquary. He put a Soldier token in front of Kird Ape, then before damage sacrificed a land to pump his Knight and tutor up a Mountain and pulled the trigger on Lightning Bolt targeting Wild Nacatl. At the end of combat, Kird Ape remained for Burton, while Kibler was sitting pretty with Elspeth, a 5/5 Knight of the Reliquary, and a Treetop Village.

Clearly excited about his prospects in the match, Brian spent his turn quickly pumping his Knight with Elspeth and attacking for 8. That left Burton at 6 and dead the following turn, and when Brian followed his combat step up with a Tarmogoyf to block, it was looking very bad for Hunter Burton. He used Path to Exile to remove the ‘Goyf and attacked Brian to 8. With a Lightning Helix in his hand, he could survive one more attack by pointing the instant at his opponent’s dome. When Brian revealed Punishing Fire, however, Hunter recognized his story had come to an end. The home-town hero’s fantastic run was over. 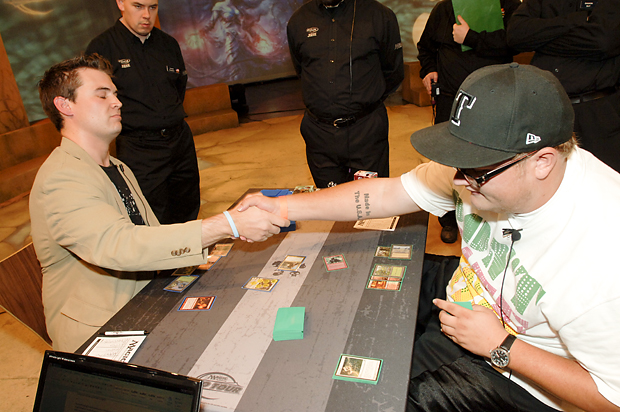 Brian Kibler defeats Hunter Burton 3-2 and advances to the Finals!