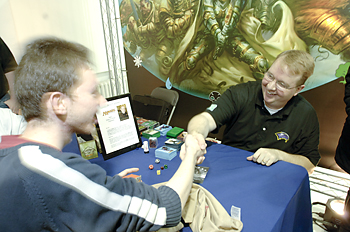 etween competing for many years as a pro—since the second ever Pro Tour—and then working for Wizards and helping with event coverage, I've been to a lot of Pro Tour events. And while I've participated in these events in all kinds of ways, one thing I'd never done before this weekend was gunslinging.

For those who don't know, Pro Tour events have lots of different things going on in addition to the main event itself. Between artist signings, 'round-the-clock side events, league and intro play, and more, there's always something fun to do or try at the Pro Tour. For each of these events, Wizards of the Coast sends a combination of R&D and Hall of Fame members and then puts them in their own section where anybody can line up for the chance to play against them. There are always prizes like booster packs and drawings for cool gear, plus what for many people is a unique chance to meet and play against people they've heard or read about.

For this event, the four gunslingers were Hall of Famer Darwin Kastle, R&D rules manager, designer, and evil genius Mark Gottlieb, Hall of Famer and R&D member Mike Turian, and then me. While I'm not as involved with the design and development end as I'd like to be if I could find more time, my team is part of R&D and because of that all of us get the complete inside view on how everything comes together.

Since my days near the top of the game were a very long time ago, I wasn't sure how many people would know me from my pro history as opposed to being involved with the web site. I was very surprised that once we did start playing that lots of people not only knew my history but even remembered archaic decks from over a decade ago, asking surprisingly detailed questions about things that even I could sometimes barely remember doing. I had a great time meeting so many enthusiastic people, and while Wizards is certainly a great place to work, it was really nice to get out and have this kind of chance to spend so many hours just playing Magic with so many people who just love the game. 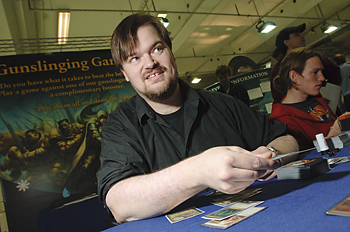 Pro Tour history aside, when I'm not competing I'm actually a Timmy / Johnny who thrives off of big plays and cool creative combos, whichever side of the table they happen to come from. Before the event I put out the call to my fellow R&D members for help with deck ideas to feed that desire, particularly decks with fun ideas players might not have seen or decks that could put on a great show for all the people waiting in line.

Here are my favorite Standard decks that the other players got the biggest kick out of, featuring the deck-building chops of Mons Johnson, Greg Marques, Jay Schneider, and more. In fact, each of these actually had players in line see them in action and then at various times specifically request if they could play against a favorite they'd seen. Between the great time we had and all the kind words these decks received, I owe a big thanks to all my R&D friends that helped put these together. For this article I'll list out those favorite decks, and then finish up with my favorite deck that I saw on the other side of the table.

Remember that for each of these the main point was entertainment, so with the exception of the Elf deck, none of these are particularly tuned killers. Also, because mana bases are so flexible these days and how you put together your own decks will depend on what cards you have, for these I'll just list the spells and then indicate how many lands are. Feel free to put the mana together however best works for you, whether it's painlands, filter lands, the great new Shards of Alara uncommon tapped lands, Vivid lands, you name it. That said, for any of these that have special lands with a specific purpose I'll make sure to call them out.

This deck tries to get out any one of Spawnwrithe, Constable, or Selkie, and then send it in for massive damage with Elspeth and/or Rafiq. This deck is spectacular when it goes off, often spending turn three or four drawing a ton of cards, making a bunch of Spawnwrithes, or sending four or five cards back to hand with a pumped Constable. By far the most fun for me was getting out a Chameleon Colossus with a Rafiq in play. Exalted lets it come in for 5, double strike makes it 10, and one doubling activation gives you the whole 20 in one simple swing. I got to do it only once, but the crowd reaction was well worth the wait.

This deck gets to abuse the changeling interaction with Crucible of Fire for massive Timmytastic attacks. The deck gets to run loads of the Lorwyn tribal lands (thanks to all the changelings) and 4 Mutavaults also pitch in for Crucible of Fire shenanigans. While I had loads of fun with this deck, with more time I'm still hoping to work in a hybrid version that uses the changeling / Crucible core but is based more in green and gets to use Dramatic Entrance with Reaper King, plus one copy each of Broodmate Dragon and Hellkite Overlord. That gives the deck access to the great green changelings like Chameleon Colossus and Changeling Titan, instant shenanigans with Dramatic Entrance, and some very promising Reaper King action. I don't know if there's actually a deck there, but it's sure awesome to play in my head!

Next up is the deck that got the most requests for playing against. It's called "Miracle 'Splode" and comes courtesy of Jay Schneider:


This hysterical deck wants to get a Quirion Dryad and/or Cinder Pyromancer into play and then go nuts, playing as many spells as possible to put it away. Thanks to that plan you get to run all kinds of suspect cards like Stun and Needle Drop, but when the deck goes off it can be just amazing to behold. Goblin Lore is a particularly nice touch that Jay came up with. The deck has a tendency to clump into too many lands as you get into the middle game (if there is one), and Goblin Lore is a fun red way to try converting those lands into more action while getting your Dryads and Pyromancers going. 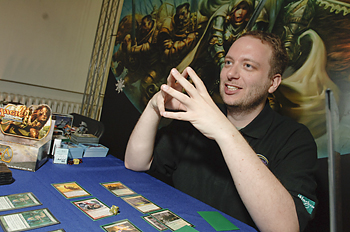 Bill Stark pointed this deck out for me after seeing it as a fun alternative deck that had made some impressive finishes. This one's more cutthroat than then the other decks, which made it nice to have for more competitive players who were looking to play their strongest decks and wanted a challenge. I didn't realize coming into the event just how popular the Extended version of this deck would be (Wow Glimpse of Nature is good!), and I started out the day gunslinging on the floor below the main event, so I only heard second-hand that I was playing something so close to what was all over the top tables above me. Like its Extended relative, this deck puts out a frightening rush with surprising speed even for an Elf deck. Heritage Druid is the best card to see in your opening hand, followed closely by Bramblewood Paragon. Even without those however, the deck puts on a great beatdown and finishes very strongly with Overrun and Coat of Arms should it come to that.

Lastly, there's this great planeswalker-based deck that I borrowed from Mark Gottlieb when he wasn't playing. This one is my favorite to play and is probably also one of the strongest we had in terms of flexibility and outright raw power.

With 4 Birds and 4 Bloom Tenders, this deck has great mana despite the low land count, and Bloom Tender powers out some outrageous draws. The combination of midrange creatures and so many planeswalkers often made it very difficult for my opponents to get through for enough damage to control the planeswalkers, and once you get more than one of these in play and running it feels like you've got a whole team going and plays out that way when your opponents have to find some way to get in for enough damage on all your different sources and through so many good creatures and removal spells.

Paul Smith was my genial assassin for this game. He and his friends noticed this deck as it tore up various Friday Night Magic events in their area. They all stressed that as far as they knew credit for the original deck went to a player named Cyrus Bales. The deck was so much fun to see in action that I asked if I could get the list from them. They were happy to write it down but unfortunately I didn't notice until just putting this in that they accidentally left three cards out. 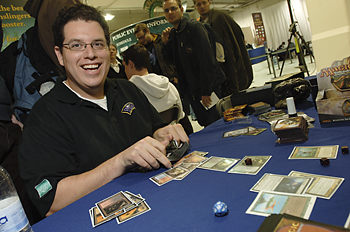 In this deck the Swans are surprisingly hard to get around if you don't have or resolve some of the few ways to get the annoying blocker off the board, and this deck is very dangerous to draw too many cards against. My initial offense stalled out against this monster and two turns later Paul dropped out a Sanity Grindingand a Twincast. I haven't done the math myself but these guys said the mean is around 20 cards per Sanity Grinding, and watching these two copies resolve I can certainly believe it as well over half my deck crashed into the bin! It was only somewhere around the seventh turn, my deck was already down to critical levels, and Paul easily put me away from there with Dream Fractures and Jace. Fun stuff, and like so many people I got to meet this weekend, Paul and his friends were a blast to play against and get to know.

My first time coming out to gunsling since joining the company, after this weekend I'll definitely be asking to get out for this kind of thing as much as I can. For everybody that came out to play, thanks for all the great games and chats, and for anybody that hasn't had a chance to come out to an event yet, keep watching that schedule and trust me, get out to the closest one you can find! Pro Tours are about much more than just the main event, and everybody I met that came out to see the event said they'd had a great time and would definitely watch for more chances to come out, play, watch, and maybe smash around an R&D member or two at the gunslinging tables.