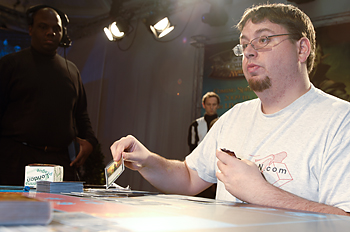 Luis Scott-Vargas faces a difficult match-up in the 'Tezzerator' deck.

hile Elves! might be the talk of the tournament in terms of putting up numbers, the real big winner at the tournament thus far has been a mythic rare blue planeswalker controlled by a small Swede. Kenny Öberg's "Tezzerator" deck romped to the top of the standings and stayed there all weekend. With a great match-up against creature decks, Öberg has to feel that he has been blessed with an ideal Top 8. Turn-two kills are rough work for him, but if the Elves! deck doesn't achieve that heady dream, it is something of an underdog to the artifact-based lockdown of Tezzeret the Seeker.

Luis Scott-Vargas is all about the turn-two kill. Unlike the other Elves! decks in the Top 8, his version is very single-mindedly aimed at being the combo deck. Weird Harvest over Chord of Calling makes his version slightly faster, though many commentators have suggested that the small amount of extra speed isn't as good as the versatility and consistency of other builds in the Top 8.

Öberg won the roll and kept a strong seven, while Scott-Vargas did not have a playable seven and had to go to six.

"There aren't two cards I can think of that would make that hand keepable."

While Scott-Vargas had a turn one Llanowar Elves, Öberg had a turn-two Chalice of the Void set at 1. Given the way the elf deck is set up, that meant that Scott-Vargas would almost certainly need a Viridan Shaman to get himself out of trouble.

Öberg followed up with Trinket Mage for Great Furnace. He had another Trinket Mage to find Chrome Mox, and got to beat in with his first wizard. Meanwhile, Scott-Vargas was drawing, but not playing a single spell. The following turn, Tezzeret the Seeker came out to play.

The mythic rare planeswalker quickly found a Trinisphere, which would prove to make life tough for Scott-Vargas. He attacked and killed Tezzeret with Llanowar Elves, but essentially the game was over. Vedalken Shackles from Öberg took out Llanowar Elves, and after Scott-Vargas drew, he scooped up his cards.

"That was the game where I have more of a chance!" lamented Scott-Vargas. 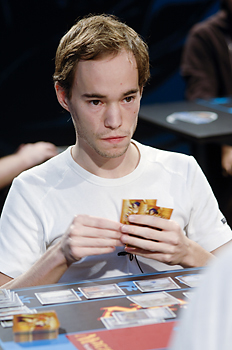 Kenny Öberg (with teammate Tezzeret the Seeker, not pictured) keeps Scott-Vargas on the back foot.

On the play, Scott-Vargas again had Llanowar Elves, and Öberg had a Chrome Mox to accelerate into Chalice of the Void for 1. There was a Viridian Shaman waiting this time, though, and Scott-Vargas was not greatly slowed down.

Öberg played an Engineered Explosives set at 1, but took beats from Viridian Shaman and was forced to pop the explosives after Nettle Sentinel came out to play. A Trinket Mage found a second Chalice of the Void, and on the other side Nettle Sentinel and Birchlore Rangers came down, before a Llanowar Elves and Elves of Deep Shadow. Could Scott-Vargas get there before the Chalice hurt him too badly? Engineered Explosives for 1 said no.

Öberg played a Pithing Needle naming Pendelhaven before playing another Chalice of the Void set at one. He wasn't in a position to start attacking, but Kenny Öberg was definitely putting the squeeze on Scott-Vargas who simply could not gain any momentum. At the end of a quiet turn from Scott-Vargas, Öberg had a Thirst for Knowledge, which found him more gas in Vedalken Shackles. With the Shackles, Öberg was able to control all the largest creatures on the board.

Another Thirst For Knowledge dug Öberg deeper into his deck. He had a Vendilion Clique in Scott-Vargas's draw step, and seemed to be blessed with perfect timing—hitting a Viridian Shaman before it could be cast by the American. Facing down yet more attackers, and on a rapidly dwindling life total, Scott-Vargas scooped to shuffle up for Game 3.

"I guess I need three turn-two wins in a row now!" exclaimed Scott-Vargas.

Prior to the match, Öberg had indicated that his biggest fear for his deck is the turn-two win. Scott-Vargas's deck is the best set up to achieve this, but it is still a tall order, especially if Chrome Mox powers up the Tezzerator's early game.

Öberg had his first mulligan of the match in Game 3, and faced down a turn-one Birchlore Rangers from Scott-Vargas on turn one. It was followed by Elvish Visionary and Llanowar Elves. No turn-two win then.

Chalice of the Void set at 1 came on turn two from Öberg, but this time Scott-Vargas had a little game, with some creatures on the board, and soon an Umezawa's Jitte to make those monsters dangerous. Öberg cracked a fetch land to find Steam Vents, and then played Trinket Mage for Engineered Explosives. 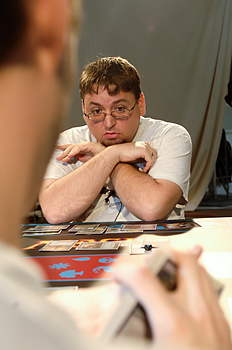 Scott-Vargas beat Öberg down to 9, but wasn't overly happy to see Engineered Explosives for 2, which blew up his Umezawa's Jitte and Elvish Visionary. He playing a pair of replacement copies of Elvish Visionary, before beating Öberg to 8. Öberg's response was Firespout.

For the first time in the match, Luis Scott-Vargas was able to play a Glimpse of Nature. He then had Heritage Druid, Elves of Deep Shadow, Eternal Witness to get back Elvish Visionary. With so varied a base of costs on the board, Engineered Explosives wouldn't be as damning for Scott-Vargas this game as others. Öberg played it set at one, and passed.

For his turn, Scott-Vargas played Elvish Visionary, and Umezawa's Jitte. Attacks took Öberg to 4, and after combat he ensured that he had an equipped creature, so that even in the case of Firespout, one Viridian Shaman would be back to get in there for the final points.

After drawing for his turn, Öberg scooped it up. It wasn't a turn-two win, but Scott-Vargas was happy just getting points on the board.

On the play, Öberg had another mulligan. With a smirk, he looked over to an Elves! mirror elsewhere in the Top 8.

"I think that they are still in Game 1," he mentioned casually, seeing dice and tokens filling their board.

Öberg had a second mulligan, presumably the cause of much whooping from fans of Team America watching in the observation area. Thus far America has won all of the Pro Tours in 2008, and while this is Scott-Vargas's first Pro Tour Top 8, he is easily the caliber of player to be able to take it all down.

Öberg went down to four cards, and looked tense as he declared his keep.

Scott-Vargas, meanwhile, was looking to do what the Elves! deck does. There was just land from Öberg for the first two turns, while Scott-Vargas had turn-one Elves of Deep Shadow, turn-two Glimpse of Nature and Nettle Sentinel to draw an extra card. 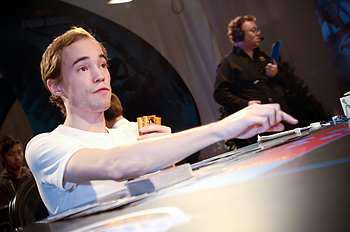 It's not over yet.

Öberg had Engineered Explosives and set it at 1. He popped it, and was disappointed to see Heritage Druid plus Umezawa's Jitte from Scott-Vargas afterward. A Firespout had to kill off just one creature, to keep Scott-Vargas off getting the Equipment active.

"I'm doing all right for a four-carder," remarked Öberg.

Scott-Vargas remained silent, thinking a little before using Summoner's Pact to fetch Mycoloth from the bottom of his deck. He played it, and the following turn had sufficient land to be able to pay for Summoner's Pact and equip. The swings from this 4/4 soon had Öberg on single digits, and drawing thin. A Nettle Sentinel and Elvish Visionary came from Scott-Vargas.

Öberg went to the tank a little before playing Vedalken Shackles and passing. Scott-Vargas played Glimpse of Nature, followed by Viridian Shaman. His Shackles remained safe thanks to Stifle, which was more than could be said for Mycoloth, who joined Öberg's side in time to act as a blocker. Öberg dropped to 5 on that swing, and with just one card left in hand looked sure to succumb. He played a Chalice of the Void set at 1, but it looked moot given the board position. The next attack dropped him to 1 in spite of Shackles.

Another draw didn't yield Öberg anything. It was on to Game 5!

For the third game in a row, Kenny Öberg was forced to mulligan. After a little thought, he kept his six, and seemed pleased when Scott-Vargas indicated that he too would need to mulligan.

There was not an early Chalice of the Void from Öberg, but this game there was an early Umezawa's Jitte from Scott-Vargas. From a position of great strength at the end of Game 2, Kenny Öberg now appeared rattled, while if anything Scott-Vargas had taken on a sheen of confidence.

Öberg played a Trinket Mage, but was in two minds as to what to fetch. He looked for a while at Pithing Needle, but eventually chose Great Furnace, which would better set him up for Engineered Explosives, and turn on Firespouts. A Pyrite Spellbomb came from Öberg the following turn to kill off Llanowar Elves, but Scott-Vargas got to get a leg up with Viridian Shaman to blow up Great furnace.

An Aether Spellbomb came next from Öberg, but it hardly seemed the best answer in the world. Scott-Vargas didn't mind having a Viridian Shaman in his hand one bit, and attacks took Öberg to 10. A fetch land for Steam Vents put Öberg on 7 but meant he could play Engineered Explosives to kill off the Umezawa's Jitte.

Yet again Scott-Vargas seemed to have the trump, though, with Mycoloth devouring one creature. This was a threat that Öberg didn't have the tools to answer.

Öberg drew for his turn and extended his hand. 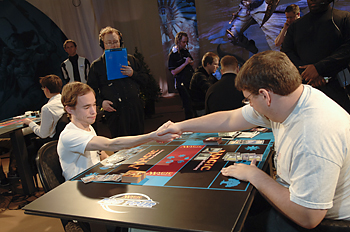