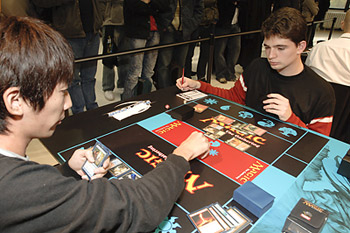 When the Pro Tour Hall of Fame was first conceived, there were a lot of players that seemed like natural inclusions from the very start. Many of them, the likes of Kai Budde, Jon Finkel, and Bob Maher, have now picked up their rings and their place in history. At the point that the Hall first got put together, Masashi Oiso was the only player in the 2012 class to have the 100 Pro Points required to qualify. His meteoric rise was right at the front of Japan's period of dominance in the game. Soft-spoken Masashi took something of a break from Magic in more recent times, but a win at Japanese nationals spells a return from the Japanese star that has many spectators of the game very excited.

Paulo Vitor "PV" Damo da Rosa is the Brazilian sensation who has had a great few years of late on the Pro Tour. While this season has been comparatively slow for him, a Top 8 in Hollywood with Faeries at a time when much of the rest of the Faerie contingent was having trouble beating the hate, Paulo seemed happy to be shuffling up 60 cards again.

Damo da Rosa quickly rolled a 20 in order to secure the opportunity to go first in the matchup, but his luck didn't extend to a solid opening seven. After a mulligan, Damo da Rosa led with a fetch land into Blood Crypt, allowing a turn-one Mogg Fanatic.

Oiso had a turn one fetch land and Lotus Bloom, while Damo da Rosa continued to hurt his life total with a fetch land to find Temple Garden, enabling a turn-two Tarmogoyf. This looked set to be a classic aggro vs. combo matchup, something we are likely to see a lot of over the course of the Pro Tour–Berlin weekend.

For turn three, Damo da Rosa had a Kird Ape and a second Tarmogoyf, and knocked Oiso to 16 on attacks. He eyed up Lotus Bloom warily—while his clock was there for the world to see, Oiso was simply letting his suspend tick down to that one big turn.

That big turn came right around the time that Lotus Bloom finally hit play. On 7 life following turn-four attacks from Paulo, he had to act, lest the beatdown outrace him. Ponder was his second spell of the turn, followed by Desperate Ritual, Seething Song, and Mind's Desire.

The very first spell that got hit for Mind's Desire was Mind's Desire, which was soon followed by a second, a Ponder and a Lotus Bloom. A sad nod came from Damo da Rosa. It looked increasingly unlikely that things would go wrong for Oiso from this point. Manamorphose, Serum Visions, Chain of Vapor and Echoing Truth came off the second Mind's Desire, along with a bevy of land.

Oiso played Manamorphose, followed by Peer Into Depths which found Merchant Scroll. The storm count had by this point become prodigious, and there was still another Mind's Desire waiting to be played for free. When Merchant Scroll found Brain Freeze, with a storm of thirteen and counting, PV scooped up his cards. 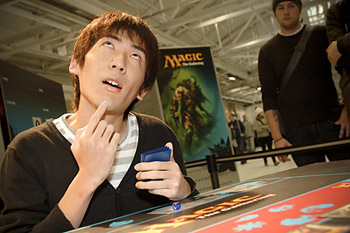 Why yes of course, Montclair!

Game 2 would see what countermeasures PV might have for combo. He clearly still had a clock, with a turn-one Figure of Destiny, but opinions among Zoo players as to disruption have varied a great deal. After a turn-one Ponder from Masashi, Paulo showed an Ethersworn Canonist. Against Storm, this is a powerful piece of disruption indeed, and one that Oiso walked right into, accidentally trying to play a pair of card drawing spells the very next turn. A Firespout cleared the Brazilian side of the board, but there was a wince from Oiso as a second Canonist soon joined the party.

As long as Canonist was around, Oiso's tempo was effectively ground down to nothing, playing just a single card-drawing spell each turn. Paulo accelerated his clock with Dark Confidant and passed. In control of the beatdown, Damo da Rosa sat ready to take Oiso's final life points unless Masashi could disrupt back.

In a matchup where clocks on either side are fast, the value of going first skyrockets, so while Masashi knew he was likely to face some disruption in Game 3, he was likely happy to effectively get an extra turn in what is a sprint to the finish line. 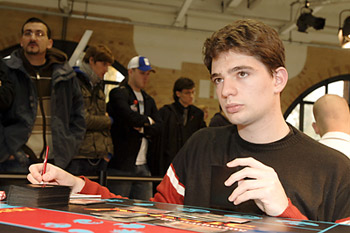 PV's sleeves match his shirt—minus the sleeves, that is.

Both players kept their openers, and Masashi again had a Ponder for his first turn. There was no Lotus Bloom to follow, though, and Damo da Rosa got to get on with his "fetch land into Ravnica dual" plan, which hurt him, but would pay off fast as a Wild Nacatl joined his team. Temple Garden meant it was a 2/2 from the beginning, and Bloodstained Mire into Blood Crypt ensured that it would be the full 3 points from the Brazilian on turn three.

Damo da Rosa had Tidehollow Sculler to follow, making the most of all of the new juice to come out of Shards of Alara. This was responded to with a Peer Through Depths from Masashi, which in turn found another one. A pair of Firespouts in Masashi's hand made the Sculler moot, but did give Paulo a little information. Oiso was still a little way of achieving his "one big turn," having a little acceleration but no big spell to play.

Following Firespout #1, Damo da Rosa rebuilt with Wild Nacatl and Mogg Fanatic. Being able to played a 3/3 for just one mana meant that his PV's clock wasn't slowed as greatly by that first removal spell, and he was soon cracking in again. Peer Through Depths found Ponder for Oiso, who had a long think about how best to rearrange the top cards of his deck. Ethersworn Canonist was the final thing to spur Firespout #2, after which Damo da Rosa had Dark Confidant.

Attacks from Paulo took Masashi to 8. Soon he would have to make a move, and while he had a Lotus Bloom suspended, it seemed unlikely that he'd get the time to use it. Two copies of Rite of Flame chained into Manamorphose, but when the Manamorphose drew him another Rite of Flame, Masashi dropped his hand on the table. He never did find the Mind's Desire that his heart desired, and instead was left to be finished off by some of the most dangerous two-drops ever printed.