Pro Tour–Berlin Round 10: When Two Tribes Go to War 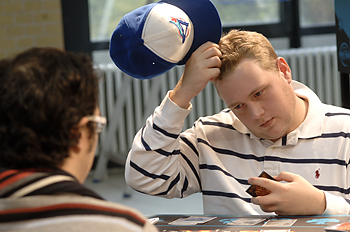 Both Johan Sadeghpour and Rich Hoaen are best known for their skills with 40-card decks, but for Pro Tour–Berlin they have each found themselves a 60-card deck that they like and run with it. Johan Sadeghpour is the lone Goblins player here on Saturday, reveling in the fact that Elves! is doing as well as it is. Meanwhile Rich has a similar Faeries deck to Gadiel Szleifer (a Gerry Thompson creation that has served both of them very well thus far), and is loving playing turn-one Dark Confidant for fun and profit.

Johan won the roll and had a mulligan before playing Bloodstained Mire into Stomping Ground, a card and 3 life down before playing a spell. His first-turn monster was a Goblin Sledder, who was able to get stuck in unmolested as Rich didn't have any turn-one play beyond a fetch land. Johan was a little mana-light, playing a Chrome Mox but no land on turn two. He had a Mogg War Marshal, and passed.

Rich played out a Bitterblossom to give him a steady stream of blockers, which was enough to prompt an echo payment from Johan for Mogg War Marshal. A Goblin Warchief the following turn was countered by Spellstutter Sprite, but Johan still had play, effectively trading Mogg War Marshal for two of Rich's team when Hoaen double-blocked Goblin Sledder on attacks.

Another War Marshal soon followed, and in turn a Skirk Prospector. When Johan ran in for further attacks, Rich had a Vendilion Clique to improve his own hand and trade with Goblin Sledder.

"Where's the Umezawa's Jitte?" asked Sadeghpour with a quizzical smile.

"Not here yet," smirked Hoaen, who would be in great shape should the legendary equipment make an appearance.

On 10 life, Rich played Dark Confidant. The Wizard was always going to be a chump blocker, and Rich stemmed the tide by trading with most of Johan's team, and following up with Engineered Explosives to finish the job.

Now it was Hoaen's time to fight back. His Bitterblossom got active, and he had a Spell Snare for Goblin Piledriver. While a Skirk Prospector made it down, it didn't seem likely to attack too soon. Rich was on 5 from Bitterblossom, but he had gained control. There was just one piece of the puzzle left to find.

"There it is," remarked Hoaen as he played Umezawa's Jitte.

This was more than enough to entice Sadeghpour to scoop up his cards and move on to Game 2. 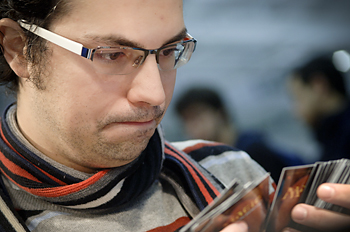 ...But it's Johan Sadeghpour who can't find any answers.

Johan had a pretty solid start to the game, with a fetch land, Chrome Mox, Rite of Flame, Mogg Fanatic, and Mogg War Marshal. Rich, meanwhile, had to content himself with a turn-two Bitterblossom, the workhorse of his deck .

By the time that Rich had three lands for an end-of-turn Thirst For Knowledge, Hoaen was on just 10. He dropped to 8 on attacks, but had a Mistbind Clique to champion his Bitterblossom and effectively end Johan's turn.

Goblin Sharpshooter from Johan resolved, but Mogg Fanatic was stopped by Spellstutter Sprite. That Mistbind Clique was problematic, though. It came in for 4 points in the air three turns in a row, and to keep things safe, Rich had Riptide Laboratory to return and replay his Mistbind Clique, keeping Sadeghpour tapped down. Bitterblossom had done the early work, and the Clique was more than enough to finish it off.