an Doise has made two Grand Prix Top 8s, one in Cologne and one in Genova, but hasn't yet made his breakout performance into a Pro Tour Top 8. This might be his weekend to do so, with his Elves! combo deck featuring both the Mirror Entity combo and going large with a team of Elves, which as it turns out is not too shabby either.

His opponent, Shouta Yasooka, is an accomplished mage. He has a stunning nine GP Top 8s along with the Pro Player of the Year title in 2006 and a trophy as one member of the winning trio at PT: Charleston. The quiet Japanese pro brought a Gifts Tron blue-black control deck to battle, finding his way to the top tables with a combination of powerful artifacts and insane card drawing.

Yasooka rolled 2d6, scoring only 5, which seemed unlikely to hit Doise's AC, but Doise had a critical failure on defense... with two 1s.

"Have fun," said Jan Doise, readying himself for the battle ahead. 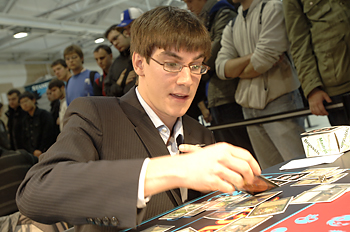 Yasooka led with a tapped Watery Grave, and Doise took the opportunity to kick his Elf engine into gear by fetching a Forest with Wooded Foothills and laying down one of the most important mana generators for his deck: Heritage Druid.

Yasooka showed his own form of mana generator: one piece of the lauded Urzatron, an Urza's Mine, while Doise just beat down with the Druid and played another fetch into Overgrown Tomb. Content to remain the beatdown, Doise took Yasooka to 18. An end step Thirst for Knowledge discarding Chrome Mox gave Yasooka the edge in cards, but would he have the time to use them? He entered phase two of Urzatron development with an Urza's Tower and played a Dimir Signet to increase his colored mana count.

Doise's next turn was epic. He started with Glimpse of Nature, then played Wirewood Symbiote. Yasooka had him pause for a second to consider, but then let both Wirewood Symbiote and the card draw resolve. A Birchlore Rangers and then a Summoner's Pact for Nettle Sentinel kept the engine revving up to high speed. The Heritage Druid provided enough

for another Druid and a second Nettle Sentinel, kicking it into turbo. Essence Warden shot his life total up to 25 after a succession of one-mana elves and Symbiotes culminated in Mirror Entity.

That's when the engine exploded.

Wirewood Hivemaster followed, and with an activation of Wirewood Symbiote he renewed his Nettle Sentinels by replaying a Heritage Druid. After about six more Elves, Doise had 45 life, six insect tokens, 14 green mana, and an army of the little green people. He activated Mirror Entity for 1 to make the Insects into Elves, and then tapped them for mana and used Entity with X = 20 to attack with an army of one gigantic 20/20 Heritage Druid.

Yasooka was cold as ice as he Smothered it.

Doise seemed only a little shaken by this turn of events. After combat, Doise used a Chord of Calling with X = 2 to fetch a second Wirewood Hivemaster and passed the turn.

Yasooka, an unstoppable, unflappable pillar of calm, played Damnation. Doise thought for a second, returned Nettle Sentinel, Wirewood Hivemaster, and Heritage Druid to his hand using the three Wirewood Symbiotes, and binned his massive army. Yasooka then completed the Tron and played an Engineered Explosives with X = 1.

Doise paid for his previous megaturn's Pact, then laid a land and his Nettle Sentinel. After beating down for 2, taking Yasooka to 13, he restarted his previously stalled engine with another Glimpse of Nature, putting on the gas with Hivemaster into Visionary into Heritage Druid into another Visionary. Yasooka responded to that by Exploding Heritage Druid and Nettle Sentinel. Doise, unfazed, played another Heritage Druid and then Chorded for a second Hivemaster. A Pact later and he had his fourth and final Symbiote, allowing him to kick back into overdrive despite his lack of Nettle Sentinel. Unlike last time, however, Doise merely went into cruise mode, with one more Elf for a few more tokens, ending the turn at 45-13 with eleven Insect tokens and seven Elves ready to untap and smash.

Yasooka played another Signet and ended his turn, missing the second Damnation to stop the extreme Elf beats. When Doise remembered his Pact payment and came in with the full team, Yasooka packed it in. Shouta Yasooka does not seem to be on the right side of this board state.

Yasooka decided he wouldn't be left out of the mana game this time, spending turn one playing Urza's Tower, Chrome Mox removing Deathmark, Signet. On turn two, Yasooka went for the jugular with Deathmark of Doise's Nettle Sentinel and Chalice of the Void at X = 1. Doise played around it with a Wirewood Hivemaster. Yasooka completed his triumvirate of terror with Persecute naming green on turn three, losing 3 life in the process to a Polluted Delta fetching untapped Watery Grave. It was a small price to pay, however, as his opponent discarded a hand of three Birchlore Rangers, Chord of Calling, and another Hivemaster.

Doise played a mystery morph, sliding slightly around the nearly impenetrable wall of the Chalice, and bashed in on the next turn, making the life totals 19-14 in his favor. Yasooka just replied with an end-step Gifts Ungiven for the remaining Tron pieces along with their partner in crime Tolaria West. Damnation followed by the great and powerful Grim Poppet convinced Doise to concede.

Doise immediately went to 17 to fetch a dual for his Nettle Sentinel. Yasooka replied with an Urza's Tower, earning him 2 points of damage from the Sentinel. On turn two, Doise provided the gas with two Birchlore Rangers and an Elvish Visionary. Yasooka kept the Tron flowing with an Urza's Mine, but appeared not to have much in the way of answers to the impending Elf horde. Doise continued to pummel himself by fetching duals, going down to 13 and playing a Heritage Druid. Rather than attacking, he passed the turn.

Yasooka played an Island rather than complete the Tron, and played a Chalice of the Void with X = 1. Doise nodded and revealed why the Elves decided not to attack, calmly tapping all of his Elves on Yasooka's end step for a Chord of Calling with X = 3. It turned out they were just waiting for the shiniest Elf, Mirror Entity, who pumped the team to 4/4s and brought in 24 damage and the match.

4 Thirst for Knowledge 1 Crucible of Worlds