Pro Tour–Berlin Round 12: The Real Tech

he second day of competition was well underway when Player of the Year frontrunner Shuhei Nakamura, running the Elves! deck, sat down to square off against Tom Keren, piloting a Rock deck featuring Life from the Loam. The young Frenchman is a newcomer to the feature match area, and he faced a doozy; Nakamura already has one Top 8 this season from Pro Tour–Hollywood and is recognized as one of Japan's all-time greats. 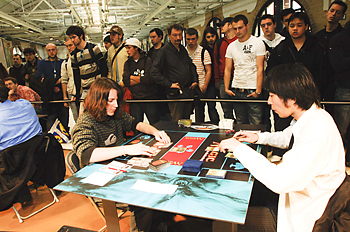 Opening with one of the more popular starts on the weekend, Nakamura dropped a first-turn Llanowar Elves. When Keren spent his first turn on a Thoughtseize, Shuhei revealed Nettle Sentinel, Glimpse of Nature, Heritage Druid, Elvish Visionary, and Birchlore Rangers. Conspicuously, he was missing a second land drop, but rather than take the Heritage Druid in an effort to keep Shuhei's mana stuck at two, Keren forced his opponent to bin Glimpse of Nature. Nakamura made Elvish Visionary, but he still hadn't hit a land drop and was stuck on just one Forest.

Still, with a Llanowar Elves on the team, Nakamura's deck was eventually able to explode. He used a single green mana to play Heritage Druid then, thanks to his two other Elves, he was able to make three mana. That allowed him to play Wirewood Hivemaster, but when he followed up with a Birchlore Rangers, Keren paused the game. A Smother in response targeting the Insect-generating 1/1 kept Nakamura from doing anything truly crazy in the short term, and he was forced to pass back to Tom.

The French player had just a land for his turn, leaving him with three mana up as he passed, and Shuhei settled in for the big one. After doing some calculations, he played two Nettle Sentinels and a Heritage Druid, generating enough mana to Chord of Calling. By the time he was done, he had all the elements he needed to achieve critical mass: the Heritage Druid, two copies of Nettle Sentinel, a Wirewood Symbiote to allow him to start drawing extra cards with Elvish Visionary, and a host of other Elves. Still, he was missing the Glimpse of Nature part of the puzzle, and as he passed the turn he was forced to burn for 6 from unspent mana in his pool. That left the totals at 15-14 in Keren's favor.

Tom wasted no time in coming back on his own turn. He used the Punishment half of Crime to wipe out Shuhei's team, but Nakamura simply bounced his Elvish Visionary to cantrip into more action the following turn. The sorcery did leave his board empty save for two Forests, however. Shuhei worked to build his team back up while Keren developed his in the form of a Ravenous Baloth.

Nakamura tried to rebuild his board using a Summoner's Pact digging up a Wirewood Symbiote, which allowed him to start drawing cards again thanks to his Elvish Visionary, but unfortunately for the Japanese pro, he was relying on the survival of dual copies of Heritage Druid to pay for the lethal upkeep of the Pact. When Keren revealed he had a second Crime, Shuhei packed it in for the second game.

Tom had to open on a mulligan, and agonized over whether he should keep his six. Ultimately he decided to ship it back for five, though he was bolstered slightly by the fact he was on the draw. It didn't hurt that at just three lands, a Crime from the Frenchman could virtually wipe out Shuhei's board, netting him a huge amount of card advantage and potentially making up for the mulls.

Nakamura opened on Nettle Sentinel while Keren started with Wooded Foothills. A Hivemaster followed up for Shuhei, and he was going to beatdown the old fashioned way. Many of the Japanese players running Elves! have Fecundity in the sideboard, and with an aggressive start on the back of his 2/2 and the Insect generator, Shuhei could follow both up with the enchantment on his third turn and put Keren firmly on the backfoot. Not willing to play along with those plans, Tom used a Thoughtseize to reveal the enchantment ready and waiting in Shuhei's hand, alongside a Chord of Calling and some lands. Judging the instant to be more problematic, Keren forced Shuhei to discard the Chord over the Fecundity, allowing the pro to promptly play the enchantment on his following turn. 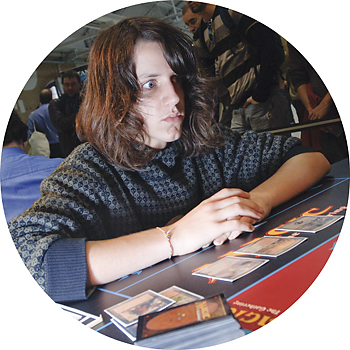 The totals stood at 20-10 in Nakamura's favor, and Keren was backpedaling furiously to keep up. He played a Blackmail to reveal that his opponent had topdecked a second Chord of Calling, which was binned, then played Tarmogoyf, stabilizing in the short term. Shuhei was unimpressed, ripping a second Fecundity to make sure that if Tom wanted to kill Elves, it would cost him. Tom got Life from the Loam going for a Wooded Foothills and Tranquil Thicket, but Shuhei attacked unabashedly, happy to run his creatures into Tarmogoyf for the chance to draw two cards. Combat left Keren at a measly 4 life.

The next attack forced the French player to block, netting Shuhei two free cards. That quickly led to a flurry of action as Nakamura hit Elvish Visionary and Heritage Druid. By the end of the turn Nakamura was sitting on a half dozen Insect tokens, a Wirewood Symbiote, and a horde of other Elves that included critical combo elements like Nettle Sentinel and Heritage Druid. It wasn't looking good for Tom Keren.

The young player moved to his mainphase, used a sac land to minimize his deck of blanks (leaving him at a precarious 3), then cycled a Barren Moor to find a miracle. He got one, of sorts, in the form of Firespout. That let him wipe out Nakamura's board, but gave Shuhei ten free cards. With three Tarmogoyfs on the board Keren attacked Shuhei to 3, resigned to wait and see whether Shuhei could put together enough damage together to finish the last few points of Keren's life.

Wirewood Hivemaster and Nettle Sentinel hit for Nakamura, who then played Heritage Druid to demonstrate that he would be able to generate massive amounts of mana all while creating a ton of Insects. Double copies of Summoner's Pact allowed him to keep the action going, but he couldn't find a Chord of Calling to get the Predator Dragon he needed to win immediately. Tom Keren was given a second chance, untapping and looking at one more card.

That is, until Shuhei revealed that he did have the Chord, using it during his opponent's draw step to fetch out a Tar Fiend. That forced Tom to discard his hand and, devoid of answers and facing a massive horde of Elves and Insects, Keren conceded.

Shuhei's heads-up play of holding his Chord of Calling to ensure victory by eliminating his opponent's outs clearly demonstrated why he's in the lead of the Player of the Year race. Instead of getting greedy and simply Chording for a lethal Predator Dragon, Shuhei made the techier play of being patient. That protected him from losing to a Putrefy or some other instant-speed removal spell, and still kept Keren from drawing a second Firespout or Crime to stop his opponent. 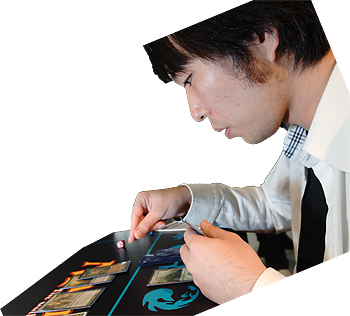 A Thoughtseize from Tom Keren revealed that Shuhei was holding two copies of Wirewood Hivemaster alongside a Summoner's Pact. He opted to steal his opponent's Pact while Shuhei began building up a board of Elves.

At 10 life from some quick attacks off a Nettle Sentinel and Wirewood Hivemaster as well as his own mana base, Keren looked to stabilize with a Smother on his opponent's Hivemaster. That still left a second copy in play for Shuhei, but he was down to drawing from the top of his deck after a second Thoughtseize from his opponent nabbed his only Elf in hand. Fortunately, Shuhei ripped a Birchlore Rangers allowing him to attack his opponent to 4 and leaving him with lethal damage awaiting Keren if he didn't find an answer to Nakamura's team. Of course, if he did, Nakamura would be completely out of gas and down to hoping for topdecks.

Keren found a Kitchen Finks to buy him some time but the fearless Nakamura bashed right in with everything. The attack left Keren at 1, but enabled him to kill off his opponent's Wirewood Hivemaster. Surviving the turn, Keren sat up straight in his seat. He used a Raven's Crime to force Shuhei to discard his final card in hand (a land), then played Crime for one, wiping out Nakamura's board save for a lone Insect token. With a Kitchen Finks on the board, things were looking pretty rosy for Tom Keren all of a sudden.

Not to be outdone, Shuhei drew Summoner's Pact and used it to fetch up an Elvish Visionary. That drew him into a Birchlore Rangers, which allowed him to go lethal if he remembered to pay for his Pact. Keren surveyed the board and considered his options. He had a Crime in hand, but was still dead to Shuhei's team as he could only use it to wipe out one of his opponent's creatures. He needed some more help from the top of his deck, but when he drew for the turn and didn't find anything, he gave the match to Nakamura.