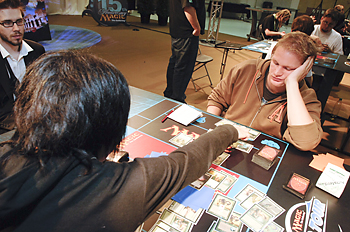 The look on Jan Brodzak's face speaks volumes about the Elves! mirror match.

ollowing a Top 8 berth in New York at 2007 Worlds, Yoshitaka Nakano has had a comparatively quiet season. Working with many of Japan's best players though, it is no surprise that he is well practiced and performing with the Elves! deck that has been the big breakout success of the tournament. The deck proved a popular choice and has put up good numbers thus far. One way or another, Elves would win this match, as Czech player Jan Brodzak was also playing the little blighters, and likely hoping to draw Wirewood Hivemaster, a key player in the mirror.

Each player was having a great start, and Brodzak's Glimpse of Nature allowed him to get an even more formidably large team into play very fast. Chord of Calling was well powered up by Wirewood Hivemaster, and when Brodzak revealed Predator Dragon, Nakano scooped up his cards.

On the play, Nakano had a mulligan, and led off with Llanowar Elves. Brodzak did not have that concern, and played Essence Warden on the first turn. The Warden is yet another powerful mirror card, as there is little in the way of removal in the Elves! deck, and it can quite easily create a nigh on insurmountable life advantage.

Yoshitaka played a Glimpse of Nature on his turn, looking to go big. He had a Heritage Druid, and Nettle Sentinel, which along with Elvish Visionary soon saw Nakano building quite a hand. A second Nettle Sentinel put Nakano in a position where he could realistically be generating mana with every green spell he cast. He soon found an Essence Warden of his own, and the life totals began to spiral toward infinity. Elves began flooding onto the board, seemingly without end. Nakano got up to three Wirewood Hivemaster and two Essence Warden. A second Glimpse of Nature came down. At this point there seemed no chance that Nakano could fail to take the game. Drawing as many cards as he was, and with such a colossal board, it all seemed sewn up. He used Birchlore Rangers to enable a Thoughtseize, taking Chord of Calling from his opponent.

I would be lying if I said that every Elf played made it into the coverage on Nakano's turn. An ensemble chorus line, they assembled on stage for the big finish as role players in a big show. When Nakano played Brain Freeze targeting Brodzak there was no need to check the storm count. It had easily been more than 13 spells, and was probably more like 20.

"I think that Brain Freeze is boring. Dragon is faster," remarked Jan with a smirk. He wasn't wrong there; for a turn-three win, Nakano's deck had taken its time to get there. However, one of the big perks of Brain Freeze is that with it Nakano had the potential to hijack Brodzak's "big turn," either decking him in response to a Glimpse of Nature trigger, or sometimes just even going more speculative and trying to render a Chord of Calling moot by milling away the Dragon it was trying to fetch. 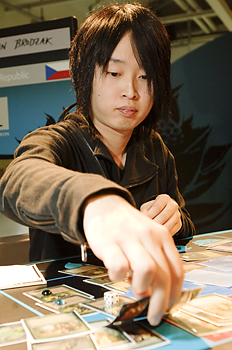 Nakano led with an Overgrown Tomb and Thoughtseize, taking an immediately concerning Wirewood Hivemaster from his opponent's hand. Brodzak had an Elvish Visionary, but was not on for a super fast start, it appeared. Nakano's follow-up was Llanowar Elves and Wirewood Symbiote. An Essence Warden came from Brodzak, but Nakano seemed unperturbed. It had already been demonstrated that high life totals would not stop his win condition.

Brodzak used Horizon Canopy to even up his draws, and Heritage Druid to fix up his mana, swiftly dropping a pair of Llanowar Elves. Nakano didn't appear to have a great deal of gas, drawing and playing just morphs for a couple of turns. He did have a Wirewood Hivemaster of his own though. It seemed likely the board would be filled soon enough. What Brodzak was well ahead on was cards. He was able to cast and recast his Elvish Visionary, all the while creating tokens and gaining life.

Soon Brodzak was on 60. The problem though, was that he seemed well away from actually winning the game. Nakano found a second Hivemaster. This meant he was able to piggyback all of Brodzak's Elves and get a bunch of Insects, but also that Brodzak's life total was getting incredibly high.

Finally, it was over. Chord of Calling ripped from the top of Brodzak's deck met no responses. Predator Dragon ate a lot of Insect tokens, and Yoshitaka Nakano along with them.