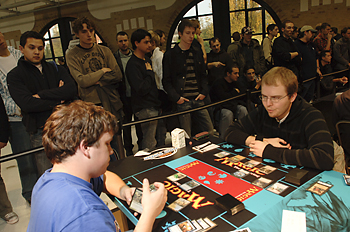 Tim Landale is hot off his win at GP–Kansas City two weekends ago, and is hoping to translate that success today into his first Pro Tour Top 8. Landale's deck is a new breed of green-white-blue control with a full set of Bant Charms, a powerful and flexible new weapon, and a host of legendary powerhouses to apply pressure.

Denis Sinner has been hovering around the top of the standings since his finish yesterday at 7-1. His Faeries deck has a host of favorable interactions involving counterspells, instant-speed creatures and of course, the ubiquitous Bitterblossom. Sinner is a rookie on the Tour this year, with his first PT being Kuala Lumpur, but his skill at slinging cards continues to serve him well at making a name for himself.

"How have you been doing today?" Tim asked his opponent.

"You did very well yesterday, then," Tim said, smiling.

Sinner mulliganed, but it was Landale who started off the match with a fetched Breeding Pool. His Sinner picked up Landale's next drop, Okina, Temple to the Grandfathers, to read it, with a chuckling Landale looking on. Landale parleyed that mana into Umezawa's Jitte. Eiganjo Castle was next, dovetailing nicely into Landale's legendary theme. Kitchen Finks followed, bringing the post-fetchland life totals to 21-19. Sinner wanted in on Landale's legends, so his first spell of the game was his own Umezawa's Jitte to blast his opponent's copy.

Finks continued to get in there, bringing the life totals to 21-13 before Sinner suspended Ancestral Visions on turn five. The Faeries classic opening came a bit late to the party, with a Bitterblossom shortly behind. As Sinner passed, Landale played a flashy Venser, Shaper Savant, but it was Mana Leaked.

Landale untapped and attacked, then played Vendilion Clique. Sinner dropped his hand of Smother onto the table before Landale could explain that he was targeting himself. Sinner apologized profusely, as Landale bottomed a Chrome Mox and drew. Bitterblossom went online, taking Sinner to 9 but erecting a small amount of defense next to his Mutavault.

Landale pushed both 3-power attackers into the red zone, which convinced Sinner to Smother the Finks. Faerie token stepped in the way of the Clique, but with damage on, Landale used Eiganjo to save it. The life stood at 23 for Landale and 8 for Sinner. 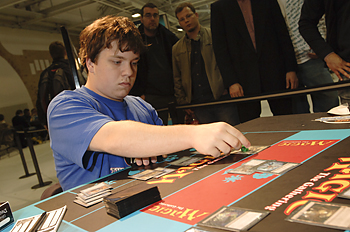 Sinner's Ancestral Vision resolved, backed up by Spellstutter Sprite to handle the impeding Stifle. Sinner reloaded and took stock. When he passed back, Landale threw Bant Charm at the Sprite, tapping him out as Sinner elected to save it with Riptide Laboratory.

Mistbind Clique came down in Tim's upkeep, championing Bitterblossom. Landale allowed it, but then tossed a second Bant Charm at the Clique—drawing out the previously returned Spellstutter Sprite. Landale shook his head at his mistake and passed the turn, Mana Shorted.

Vendilion Clique #2 came down to blast both out of the skies, revealing another two Cliques in Landale's hand. Sinner chuckled and put the remaining Kitchen Finks on the bottom. Sinner's Faeries came in to take Landale to 15, and when Landale tried another Vendilion Clique, it was Remanded. Sinner remained relatively stable at 3 life, now that Bitterblossom was safely championed by Mistbind Clique.

"So many Vendilion Cliques!" sighed Landale.

Landale went down to 4 on the next attack, chumping the Mistbind Clique with his disloyal Faerie Rogue token, and with both his attempts to get a legendary blocker into play (Gaddock Teeg and Vendilion Clique) countered, it was on to Game 2.

Now that Sinner was on the play, Landale found the tables turned, as he was forced to mulligan.

"Argh! Would have got there, too!" Landale said, glimpsing at the top few cards.

"Seems wrong to keep a one-lander, but... the matchup is pretty terrible, so..."

"Is your hand good?" Landale asked, stealing a glance at Sinner's composure as he mulliganed down to five. Sinner gave a coy smile, indicating nothing to his opponent. Landale agonized over his latest, diminished grip and finally dismissed the chances of his five-carder getting it done versus Team Faerie. He offered his latest hand back to the deck, mulliganing to four and pleading for "two lands, two spells."

He kept his four remaining cards. "It's a good four, I have to warn you." 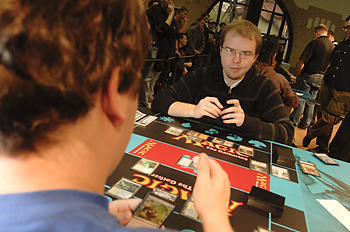 'Oh yes, Mr. Landale, I think you'll find I have you exactly where I want you.'

Landale didn't sacrifice his first land, a fetch. "I need to draw more land!" He did indeed get there, playing his freshly-drawn Island and fetching a green source, presumably for everyone's favorite Goyf.

"Turn-two Tarmogoyf? That's spicy," Landale suggested. His face fell a little, however, when he saw his opponent's

Sinner did not have the Blossom, however; only a Remand for Landale's next play, a Kitchen Finks. Sinner accepted the damages from the two power Tarmogoyf down to 14 as Landale merely attacked and passed. Sinner got to see exactly how bad the mulligans had been when he proffered a Vendilion Clique on Landale's end step, seeing Spell Snare, Kitchen Finks, and Engineered Explosives. He told Landale to keep his hand.

Sinner clocked Landale—already hurting from his repeated fetching of untapped duals—down to 11 with a Clique of the Vedilion variety, then a Mistbind-class warship arrived for orbital bombardment duties. Landale made like he had Bant Charm, but merely manaburned down to 8 with a smile. The 4/4 Clique was joined by Sower of Temptation stealing Tarmogoyf. Landale didn't stop shaking his head at the Faeries until he shook Sinner's hand.