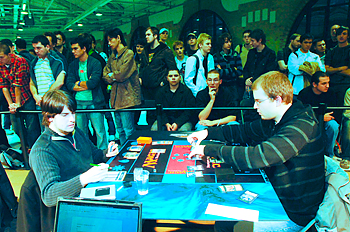 ith just this round and the next left to play on the day, the fifteenth bout of feature matches of the weekend saw two natives to the Pro Tour's home country. Thomas Kannegiesser, who was entering his first feature match of the weekend, hails from Germany, as does his opponent, Denis Sinner. Within striking distance of the Top 8, either would no doubt be excited to have home field advantage under the bright lights come Sunday morning.

Thomas started the match off with a mulligan, keeping his six. He quickly set about earning back the lost card by suspending not one but two Ancestral Visions. The card would no doubt be pivotal in this pseudo mirror match between Kannegiesser's Faeries deck and his opponent Denis Sinner's version. Sinner didn't have as much early card drawing as his opponent, but did open on the Faerie deck's other marquee card with a second turn Bitterblossom.

A bevy of counters from Sinner kept Kannegiesser's early options limited. First he lost a Vedalken Shackles to Mana Leak, then saw his Ancestral Vision countered by Spellstutter Sprite. When Thomas tried to get in with a Mutavault equipped with Umezawa's Jitte, Sinner had yet another trump in the form of Smother targeting the 2/2. When a second Spellstutter Sprite countered the second Ancestral Vision, Kannegiesser looked all but out of the game.

The totals stood 15-12 in Denis Sinner's favor as he made a monstrous attack with four Faerie Rogue tokens and a Spellstutter Sprite. That left poor Thomas Kannegiesser at just 7 life, struggling to get something going. He moved to attack with a second Mutavault, again equipped with Umezawa's Jitte, but Sinner blocked with a Spellstutter Sprite. Before damage could go on the stack, he activated a Riptide Laboratory to bounce his 1/1, preventing the Umezawa's Jitte from picking up any charge counters. Realizing he was facing insurmountable odds, Thomas Kannegiesser made the wise decision to try for a second game.

With the Top 8 on the line, the two players sideboarded and prepared for the second game of the match in silence. Despite the pressure on both of them, however, neither seemed to give any indication of feeling pressured or nervous, admirable traits for new competitors on the verge of reaching the Top 8 limelight. 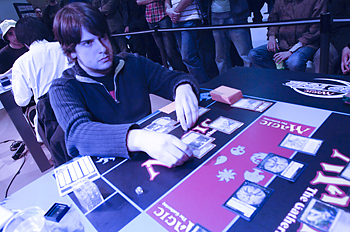 It was Denis Sinner's turn to start the game off with an Ancestral Vision, while his opponent hit lands on his first two turns. He used them to Mana Leak a Thoughtseize from Sinner, then fired back with a pseudo-discard spell of his own in the form of Vendilion Clique, main phase. That revealed Bitterblossom, Remand, and Cryptic Command as relevant targets, and Kannegiesser forced his opponent to put the tribal enchantment on the bottom of his library.

Sinner sat back absorbing hits from Vendilion Clique and Mutavault, patiently waiting for his Ancestral Vision to unsuspend. He used a Spell Snare to keep Kannegiesser from getting an Umezawa's Jitte going, but had nothing as the young German forced a Vedalken Shackles onto the board. That meant Denis would need some big help from his Vision, and when it did resolve he used a combination of Cryptic Command and Thoughtseize to bounce his opponent's thieving artifact and then discard it. Kannegiesser simply continued beating with his Vendilion Clique before suspending an Ancestral Vision of his own. The totals stood 20-5 in Kannegiesser's favor.

Trying to remain in the game, Sinner used a Cryptic Command to Fog his opponent for a turn. Still, he had no main-phase plays of his own, passing the turn back to Kannegiesser. When Thomas revealed he wasn't going to forget to attack, the two players were on to the final game of the match with 36 minutes left on the clock. 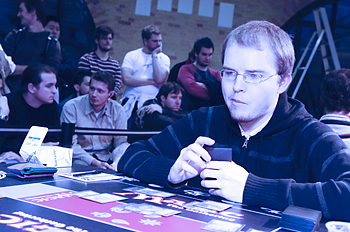 Things started off poorly for Thomas Kannegiesser as he had to mulligan his opening hand, then lost a card on his first turn to a Denis Sinner Thoughtseize. The sorcery revealed Kannegiesser had kept a risky one land hand featuring a Spellstutter Sprite, three Vedalken Shackles, and a Spell Snare. Sinner forced the Dissension counterspell to the graveyard, but had no play on his second turn.

Kannegiesser meanwhile ripped back-to-back Islands, putting him in to a game he had seemed very much out of just moments before. The two players spent turn after turn playing lands, with neither willing to flinch by being the first to play a spell. Finally, unable to wait any longer, Denis Sinner tried a test spell in the form of Spellstutter Sprite. It resolved, and gave him the Faerie he needed to play Mistbind Clique on his opponent's upkeep. That left Kannegiesser tapped out for a turn, and put a hefty beatstick on the board for Sinner.

Looking to stop the game from spinning out of his control, Kannegiesser tried to play the first of his three Vedalken Shackles. Sinner was ready with a Cryptic Command. The second copy of the artifact was countered with Remand, but not by Sinner. He had attempted to counter the artifact with a Spellstutter Sprite and, rather than lose the critical element of his defense, Kannegiesser opted to use his own counter in an attempt to set up a re-play of the card on the following turn. Sinner bashed with his team to leave the totals 14-6 in his favor.

Kannegiesser untapped and drew, looking for some help. He tapped three Islands and played Vedalken Shackles, but Sinner had Mana Leak. Regardless of whether Kannegiesser could counter back or not, he wouldn't have enough mana left over to steal his opponent's 4/4, so he was out of the match.