Pro Tour–Berlin Round 2: It's Harvest Time 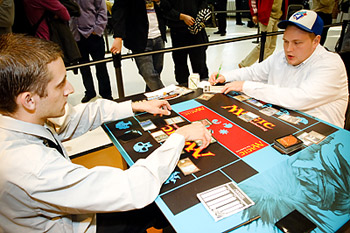 The tournament began to heat up in the second round, but these two control players kept it cool. Patrick Chapin, writer for StarCityGames.com and Worlds 2007 finalist, was paired against his StarCityGames.com colleague Rich Hoaen, of "Drafting with Rich" fame. Chapin is playing an interesting hybridized Gifts Ungiven / Glittering Wish / Life from the Loam four-color control deck, and Hoaen is playing a new take on Faeries in Extended, both with better threats in form of Dark Confidant and Umezawa's Jitte and better answers in Spell Snare and Engineered Explosives. They paused the shuffling for a moment as Pat got up to join the group picture of classy Magic players in suits.

"Do you want to borrow my hat?" Rich offered, proffering his baseball cap.

Pat laughed. "No thanks!"

The players wished each other good luck and they were off.

Chapin started off with a Wooded Foothills, sacrificing it immediately, perhaps wary of the cheapest LD spell ever, Stifle. "One or three?" asked Hoaen, remarking on the classic Extended play of Onslaught fetch land into Ravnica block dual land. Patrick took 1 for a Breeding Pool, then passed.

Both players played draw-go (sometimes draw, land, fetch, go) for a few turns, until Hoaen tested the waters with a Thirst for Knowledge on Pat's end step. Pat immediately cracked his Flooded Strand. "Playing your own?" Hoaen enquired. Chapin shook his hand, then tapped his newly minted Island along with Wooded Bastion and Breeding Pool to get the necessary

for Bant Charm to counter the Thirst. Rich had to take a second to read and confirm that yes, Bant Charm really is that awesome.

There was another round of passing, and then the action occurred on Rich's end step, with Pat going straight for his deck's namesake, Gifts Ungiven. Chapin gave Hoaen a stack consisting of three cycling lands (Lonely Sandbar, Secluded Steppe, Tranquil Thicket) and their BFF Life from the Loam. Rich gave Pat a pile with the Sandbar and the Loam as he cut Chapin's deck, but then immediately after the Gifts player picked up his new cards, Hoaen had him place them down on the table (along with the rest of his hand) as he summoned Vendilion Clique. The Clique revealed Eternal Witness, Ghost Quarter, Chrome Mox, Life from the Loam, Lonely Sandbar, and sleeper tech Worm Harvest. Hoaen paused for a moment to read Worm Harvest and then decided on putting Life from the Loam on the bottom of Chapin's library, ending any recursive cycling shenanigans before they began.

Unfazed, Chapin untapped, laid his fifth land, and tapped out for Worm Harvest.

"So, it makes four dudes?" asked Rich, counting up the fetch and cycle lands in Patrick's graveyard.
Patrick nodded, and put a six-sider onto the table set to four. With the legendary Faerie ready for action, Rich untapped and took the beatdown seat. He attacked Patrick, making it 19-15 in the Canadian's favor.

Chapin sent his four tokens into the red zone, shifting smoothly into race mode. Hoaen blocked with a Mutavault, after Stifling Ghost Quarter's attempt to mimic a kill spell, bringing the life totals to 16-15. Pat continued on the path of overwhelming Hoaen's defenses with Worms, generating a whopping six more Worm tokens from a retraced Harvest after laying an untapped Steam Vents.

Hoaen had nothing to stop the onslaught and merely brought Chapin down to 10 with the Clique before passing. Chapin crashed in again, with nine tokens total, bringing Hoaen down to a precarious 8, and then Eternal Witnessed back Bant Charm, ready for instant-speed shenanigans.

After one more attack, facing down a horde of Worms, Rich asked, "I'm at 8?" 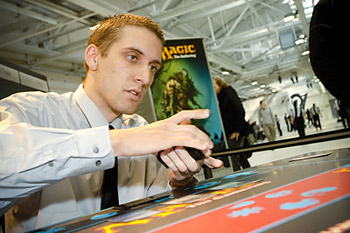 Chapin sideboarded about seven cards, but claimed "it was wrong," thinking he should have left in a few Sakura-Tribe Elders instead of bringing them out for Ancient Grudge and/or Voidslime.

As the players continued sideboarding, Hoaen asked Chapin about his performance at Grand Prix–Kansas City.

"I didn't do very well. I haven't really played the Limited format," he commented. "I've been spending all my time testing."

Richie gave Pat a look. "You are weird."

"I enjoy it!" exclaimed the American, as they finished shuffling up.

Hoaen spent a long time pondering his starting hand before pitching it back for a better six. Somewhat satisfied with the new hand, Rich kept, and they were off.

Again the game began with no plays until Hoaen missed a land drop on turn four and made up for it by playing a Bitterblossom. This demanded an answer from Chapin, who sacrified one of his fetch lands directly into Rich's Stifle. Chapin merely shrugged, sacrificed his other fetch for a Steam Vents untapped, and Spell Snared the Blossom. Richie nodded and passed the turn.

Chapin went for the opening with a Life from the Loam returning his two recently sacrificed lands, going up to seven cards to Hoaen's five. The next turn, history mostly repeated itself as Chapin played Gifts Ungiven for three cycling lands and the Worm Harvest. Rich gave him the Worm Harvest and a cycling land. The American went to dredge and play Loam but was Spell Snared by the crafty Canadian.

This sequence repeated for a few turns, with Hoaen stuck at five lands. Rich was running out of Spell Snares, and Pat had a nigh-unlimited ability to dredge back his Life from the Loam. This had the side benefit of filling Chapin's graveyard with land for the eventual parade of worm tokens from Harvest.

Patrick eventually decided to forgo another Loam and instead tapped out to Gifts again, this time for Island, Academy Ruins, Ghost Quarter, and Snow-Covered Island.

"You can't do that," responded Rich, pointing at the Islands, before realizing one was the snowy variety. "Oh wait, got it." 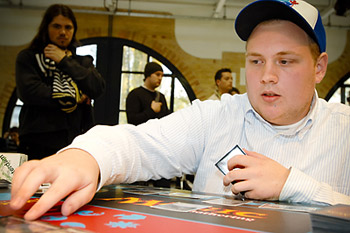 Rich took the opportunity to put Worm Harvest away with a Vendilion Clique, also seeing Eternal Witness, Spell Snare, and Engineered Explosives. History wasn't the only thing repeating itself as the Clique again began to take bites out of Chapin's life total down to Chapin 12, Hoaen 17. Fortunately, Patrick's Firespout came to the rescue with all green mana, allowing his recently played Kitchen Finks to bring the beats, closing the gap to 12-14. Eternal Witness joined Patrick's mean green beatdown team, returning Gifts to his hand.

Rich finally found a sixth land in Mutavault, but by then Academy Ruins had put a dredged Vedalken Shackles back on top of Patrick's library, making blocking impossible. Hoaen checked the next card and scooped them up.