Pro Tour–Berlin Round 3: Only Right Answers 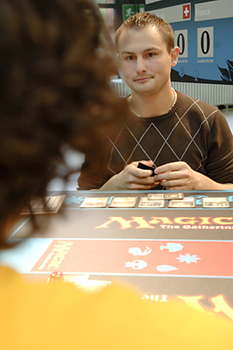 As the players sat down for Round 3, it was a reunion of two Worlds 2007 Top 8 competitors who took center stage in the feature match area. Gabriel Nassif, the renowned deck builder from France, lost in the Semifinals of that tournament to his testing partner Patrick Chapin. Huber, a Switzerland native, didn't make it out of the Quarters, but he did get an extra boost at the event with his appearance in the Team finals.

"We didn't play in the Top 8 [of Worlds 2007], but he destroyed me in the Swiss," Nassif offered up, referring to his opponent.

A Stomping Ground / Kird Ape combo from Huber quickly revealed him to be playing the ubiquitous Zoo deck, though Nassif's Island kept his specific deck choice obfuscated. Huber followed up his Ape with an Ethersworn Canonist, but Gabe was quick with a Spell Snare and the totals, thanks to Huber's dual lands, stood 18-16 in Nassif's favor.

Christoph continued keeping the pressure on his opponent, adding a Tarmogoyf to the board. Not wanting to fall too far behind, Nassif surprised Huber with a combat-step Vendilion Clique to ambush Kird Ape. He even used the "comes into play ability" targeting himself to get rid of an extra copy of Umezawa's Jitte, having already played one of the infamous Equipment on his second turn. Huber simply made a Lightning Helix to allow his team in unimpeded, and that dropped the score to 17-10 in the Swiss player's favor.

The next attack brought a second Vendilion Clique from Nassif, this time successfully trading with the 2/3 Kird Ape. Still, it cost him 4 life from Tarmogoyf, and he fell to just 6, while Huber played a Mogg Fanatic. Trying to finish stabilizing, Gabriel used Threads of Disloyalty to steal his opponent's Goyf, but because it was tapped, he would be unable to block Huber's Mogg Fanatic. With Umezawa's Jitte a turn away from being active for the French player, he was very close to stabilizing but completely helpless as he passed the turn. Huber drew, surveyed the board, then simply played a land and passed.

Just like that, the game had shifted to Nassif. He got in with his stolen Tarmogoyf, equipped with Umezawa's Jitte, and it connected. That meant that he was at a virtual 10 life, and Huber was down to drawing prayers from the top of his deck, hoping for a miracle before his own 'Goyf took the first game for Nassif. With a hand full of countermagic, Nassif's next attack left the totals at 7-6, narrowly in Huber's favor—but with the Umezawa's Jitte sitting on four counters, the Swiss player was dead if he didn't find an answer to his opponent's equipment.

When Nassif had Stifle for Huber's Oblivion Ring, then had Mana Leak for Huber's last-ditch Lightning Helix to stay alive, the players were on to the second game.

Isamaru, Hound of Konda was how Christoph Huber opted to kick off his second first turn of the match. Nassif repeated his first-turn play from the opening game by playing an Island, before being forced to reveal his hand to Huber's second-turn Thoughtseize. Seven cards were fanned on to the table as Nassif revealed Repeal, Spell Snare, Island, Mutavault, Riptide Laboratory, and twin copies of Threads of Disloyalty. Christoph forced Gabe to bin one of the Tarmogoyf-stealing enchantments, then passed his turn without playing a second creature.

When Huber finally played his second creature, a third-turn Tidehollow Sculler, it simply traded with Nassif's Spell Snare, and things were looking good for the French player. The game was already rounding into the fourth turn, and he sat at a lofty 16 life staring down only an Isamaru, Hound of Konda from his opponent. Huber, meanwhile, was at 13 life from his own painful manabase and discard spells, trying to get some type of significant action going against his opponent. He tried a Dark Confidant that met its demise at the hands of Nassif's second Spell Snare, and a Wild Nacatl that Nassif bounced with Repeal. 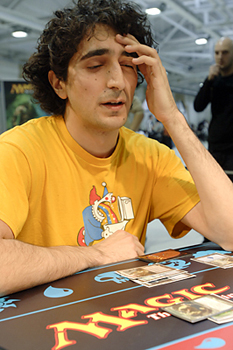 For a guy with all the answers, Gabriel Nassif looks awfully exasperated.

Still looking to get something going, Huber cleared the way with a second Thoughtseize. Nassif again dropped his hand to the board, revealing Threads of Disloyalty, Vendilion Clique, Umezawa's Jitte, and Island. Huber took the Clique, then bashed with his Isamaru, Hound of Konda. At four lands, Nassif demonstrated the trickiness of his deck. He activated his Mutavault, blocked, put damage on the stack, then bounced the 2/2 with his Riptide Laboratory (thanks to its changeling status, the Mutavault is a Wizard). Huber gave no sign as to whether he had considered the play, simply following the combat step with Wild Nacatl and passing the turn. The totals stood 14-11 in Nassif's favor.

Gabriel played his Umezawa's Jitte and re-played his Mutavault. Outwardly he gave no sign of concern about the status of the game, but a slight tremor could be detected in his hand as he twirled a pen nonchalantly. Engineered Explosives for one allowed the Frenchman to wipe out two copies of Wild Nacatl from Huber, who could only follow up with an Oblivion Ring on his opponent's Umezawa's Jitte.

Looking to put things away, Mutavault began getting in for Nassif, but Huber attempted an end to those shenanigans with Kird Ape. That held off an attack from Gabe, but he simply used the turn to steal his opponent's Ape with the Threads of Disloyalty he had been holding since the beginning of the game. Huber made a Wild Nacatl which resolved, then a Tribal Flames which didn't.

The game turned into a stall with Huber unwilling to attack into his own Kird Ape and the Mutavault / Riptide Laboratory combo. He played a second Tribal Flames targeting the stolen Kird Ape to try to get through, but Nassif responded with Repeal on the Threads of Disloyalty. Looking to prevent Gabriel from re-playing the Aura to steal Wild Nacatl, Huber sacrificed a Bloodstained Mire to find a red source that would allow him to respond with Lightning Helix on his Ape. Nassif Stifled the land and got his Threads back.

He didn't replay it immediately, however, instead using a Thirst for Knowledge to dig into the mana to play Umezawa's Jitte, activate Mutavault, equip it, and attack. That left the totals at 6-5 in Huber's favor, but the Mutavault was lethal on the following turn thanks to the Umezawa's Jitte's charge counters. When Gabriel again activated the 'Vault and tried to equip, Huber responded with Lightning Helix. Nassif had the counter, and Huber extended his hand in defeat.