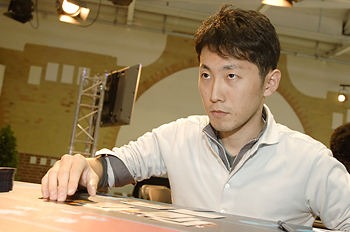 Makoto Nagashima faces his friend—and the mirror match—in Round 4.

On Wednesday night, there was a little conversation going on as to the potential Top 8 players at this Pro Tour. Rich Hagon was quick to throw Shuhei Nakamura's hat into the ring.

"Shuhei only loses when it's Sealed Deck and he's opened a really bad pool!" he exclaimed.

It's a fair comment. Coming into Pro Tour–Berlin, Nakamura has had a formidable season, which puts him in a runaway lead for the Player of the Year race.

When we started talking about what deck Shuhei might be playing, there was only one choice. Elves got him to the Top 8 in Hollywood, and given that there is an Elf deck playable in Extended, it seemed likely that he'd be going the same way.

In many respects the Extended Elves! deck is not really the same deck at all. That exclamation point is just the beginning of the differences. With Glimpse of Nature, Elvish Visionary, and Regal Force, it has a lot of card drawing, and Nettle Sentinel and Heritage Druid produce a huge amount of mana. The win conditions have been varied to say the least. Predator Dragon, Sundering Titan, Mirror Entity, and Ulasht, the Hate Seed have all been talked about, and are easy to fetch with Chord of Calling. Other win conditions that have been seen include Blasting Station, Roar of the Crowd, Brain Freeze, Tendrils of Agony and Cloudstone Curio. One way or another this is a deck that can go from zero to hero at blistering speed, and has proven a popular choice for the weekend, played by many—including both the players at the feature match table.

It seemed early on that Nagashima was well ahead, soon putting down a Heritage Druid and a second Wirewood Symbiote. These would be enough to get an engine going, but it seemed that Nagashima was short one crucial piece: the card drawing.

The Elvish Visionary count was much higher for Nakamura, who had a second, but was uncharacteristically short on mana on his side of the board. Nakamura carefully pieced together what his turn would be, playing out cards face down and keeping a mental count of what was going on. After some thought, he played a Summoner's Pact to find Heritage Druid. This enabled a Glimpse of Nature, followed by a pair of Llanowar Elves.

Now it was Nagashima's time to do some clever math and make his play. His team convoked out a big Chord of Calling for Predator Dragon, and the collective devour was enough to make the dragon lethal in a single swing.

The two Japanese friends had identical sideboards, and seemed likely to have sideboarded the same way, including Orzhov Pontiff and Goblin Sharpshooter in their arsenal. Having Chord of Calling and Birchlore Rangers, playing these off-colour monsters would not be a problem.

Shuhei had not a single one-drop, but he remained calm, playing a Wirewood Hivemaster on turn two, which quickly proved a good choice as he gained Insect tokens from the Elves of his opponent. Nagashima was stuck on a single land, but looked likely to work his way out of trouble as he played back-to-back Heritage Druids.

When a second Wirewood Hivemaster came from Nakamura, Nagashima's unflustered exterior showed its first signs of wavering. He played Summoner's Pact for Nettle Sentinel and played it. From there came a Glimpse of Nature. When Nagashima played just one more Elf though, it enabled Nakamura to convoke out a large enough Chord of Calling to fetch Orzhov Pontiff.

The Pontiff killed of Nagashima's team, leaving him woefully unable to pay for his Summoner's Pact, ensuring his loss. Both players kept their opening seven, and while Nagashima had a turn-one Heritage Druid, Shuhei led with Llanowar Elves. An Elvish Visionary came from Nagashima, while Shuhei had a small Glimpse of Nature turn, drawing a few cards and ending up with a Wirewood Symbiote and a pair of Llanowar Elves.

As it turned out, though, Nagashima had a bigger turn ahead. With a pair of copies of Glimpse of Nature and a Nettle Sentinel to go with his Heritage Druid, he was soon going completely nuts. After playing six or seven Elves, and drawing quite a few cards, he got up to his third Glimpse of Nature. With a pair of Nettle Sentinels, he had a net gain on mana for playing most creatures, along with drawing three cards apiece.

The final piece of the puzzle was to actually win the game. Birchlore Rangers did that, allowing him to play Predator Dragon from his hand. He sacrificed eight creatures to make his dragon a 20/20 and swung. That would do it.