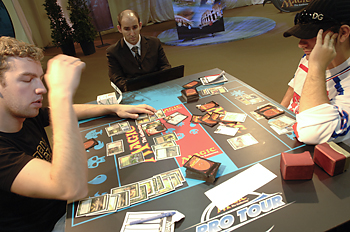 Gadiel Szleifer and Ruud Warmenhoven sat down, obviously friendly and ready for another match, now halfway through the first day of the Pro Tour. Ruud glanced around, then asked Gadiel, "Is Pelcak here?", referring to mutual friend John Pelcak.

"No, he came to [U.S.] Nationals because he could stay with me and it was convenient, but he wasn't going to come to Berlin," Gadiel replied. "I convinced him to get really excited about Berlin a few weeks ago, but he couldn't find a ticket for a reasonable price."

Ruud is playing the new breed of Elves!, a combo deck that uses creature tutors like Summoner's Pact and Chord of Calling for consistency and to reach insane Elf counts. Gadiel's deck is an adaptation of Faeries into Extended, featuring powerful wizards like Dark Confidant and the Clique twins, Vendilion Clique and Mistbind Clique. This ain't yo momma's tribal matchup!

They didn't have a die, so they clamored at Shuhei Nakamura, playing at a nearby feature table, until he tossed them one. Unfortunately, after the roll, Ruud discovered his aim was considerably worse than Shuhei's, and Gadiel spent a few moments collecting the rogue randomizer.

Gadiel immediately kept his opener, but Ruud thought carefully for a while before sticking with his initial seven.

Gadiel began lightning fast, with a Bitterblossom off of a Riptide Laboratory and a Chrome Mox imprinting Smother.

"I thought you were playing Desire!" Ruud exclaimed.

Szleifer shrugged. Warmenhoven replied with an Essence Warden off of a Windswept-Heath-fetched Snow-Covered Forest, a reasonable counter to the Bitterblossom he faced. On his upkeep, he responded to the Bitterblossom trigger with Smother on the Warden. He drew after putting a roguish Faerie token into play.

Ruud played Llanowar Elves and Birchlore Ranger, ramping up to his combo turn. Gadiel played another Mox imprinting Spell Snare then attacked with one Faerie token. Ruud continued to approach critical Elf mass, with another Birchlore Ranger and a tapped Gilt-Leaf Palace. He passed the turn without attacking.

Szleifer placed another Faerie Rogue token next to Bitterblossom (17-18) then attacked with his Faerie swarm, now two strong, bringing the life totals to 17-16 in his favor. He finished the turn with an Engineered Explosives set to 1 from his Smothermox, leaving up Snaremox and Riptide Laboratory to threaten Warmenhoven's Elves with instant-speed extinction.

Another Faerie came in, and Gadiel smashed in with his Faerie forces, now three strong, bringing the life totals to 16-13. When Gadiel passed the turn, Ruud tapped all of his Elves and two lands for a Chord of Calling (X=2), pulling Wirewood Hivemaster from his library into play. Ruud untapped and crashed in with the three one-mana Elves, considering their days numbered by the impending explosion, evening up the life to 13-13. Ruud played a morph, which Gadiel considered briefly before laying down a Spellstutter Sprite. 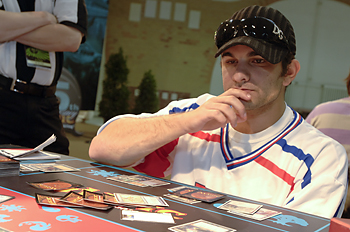 "I guess I counter it," he said, frowning.

Ruud revealed Birchlore Rangers and placed it in the graveyard, smiling. Gadiel was puzzled for a moment, then said, "Oh, it's that guy. I didn't realize. He has morph?"

Gadiel untapped and sacrificed the Explosives to wipe out all the Elves other than Wirewood Hivemaster, then smashed Ruud down to 8 while still at a comfortable 13. Ruud played Essence Warden now that the cost was clear, then Elvish Visionary to return to 12, then smashed in with Wirewood Hivemaster boosted a newly played Pendelhaven. Gadiel smothered the Essence Warden and smashed in again with Team Faerie, leaving Ruud at a precarious 4 life and needing to combo... quickly.

So combo is what Ruud did. He untapped and played Glimpse of Nature, prepared to go off using Heritage Druid. He used Summoner's Pact to fetch a Wirewood Symbiote. He drew a card off of Symbiote and then Heritage Druid #2 came in, before Pact #2 fetched a Nettle Sentinel. Midway through this, Gadiel used the remainder of his untapped mana to Smother the Hivemaster. Ruud was unable to keep going after another set of one-mana Elves drawing cards didn't find him a Chord of Calling, another Summoner's Pact, or the additional Glimpse of Natures he needed, and he scooped to the lethal Faerie swarm.

"I got greedy with the Explosives," said Gadiel.

"Yeah, I was expecting you to blow it earlier," replied Ruud.

"I should have, definitely."

"It's hard to play against," said Ruud, referring to the Elves! deck. "So many versions are slightly different."

"Yeah, that's why I countered the morph. Well, other than forgetting that little one-mana Elf had morph, because it could be, like, anything." 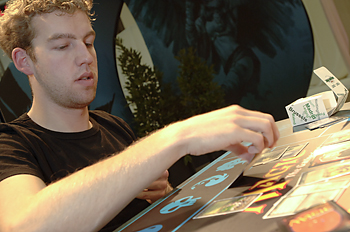 Ruud fiddles with his cards, much like all the other Elves! players in the room.

Warmenhoven began with Windswept Heath into Forest into Llanowar Elves. Szleifer, not to be outdone, played his own Polluted Delta into Island, and that plus a Chrome Mox imprinting Smother gave him Dark Confidant.

Ruud played another fetch, this time Wooded Foothills, and passed with no attack. Gad revealed Spell Snare to Confidant, put an Umezawa's Jitte onto the table and passed with just

up. Ruud sacrificed his fetch land for an Overgrown Tomb at end of turn, then untapped and played Glimpse of Nature. He then got a little mini-combo going, with:

...got Spell Snared.
At this point, despite drawing four cards, Ruud appeared out of gas and passed the turn back to Gadiel.

Gadiel revealed Vendilion Clique to Dark Confidant to go to 15. He swung in with Confidant after playing Engineered Explosives for 1 and immediately popping it to counteract Ruud's previous turn, bringing him down to 16. Ruud Thoughtseized Gadiel, taking a second Engineered Explosives. At this point, Gadiel's card advantage engine went into overdrive, drawing into Spellstutter Sprite and Bitterblossom over the next few turns.

"Not so tricky this time," said Gadiel, suspecting Birchlore Rangers. Ruud laughed. Dark Confidant bearing an Umezawa's Jitte with counters on it seemed more than a match for the face-down 2/2 along with its pal Mutavault, and the two sneaky Wizards assassinated Ruud's team. After one more draw step, Ruud conceded.

"Yeah, I know they are bad, but better than, like, Stifle." Gadiel countered. "They counter like, Hivemaster and Glimpse."