Pro Tour–Berlin Round 6: For Want of a Counter 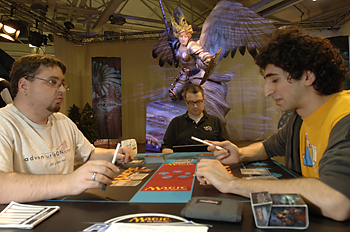 Serra Angel watches over Luis Scott-Vargas and Gabriel Nassif as they fight it out in the Feature Match area.

Gabriel Nassif and Luis Scott-Vargas shuffled quickly in the center table of the Pro Tour–Berlin Feature Match area. Both were using the same sleeves, provided free of charge for showing up to play on the weekend, and Luis accidentally spilled part of his deck onto his opponent's side of the table. Nassif politely handed the cards back. His American opponent picked them up, checked them to make sure they were his, then said, "Um, I don't think I'm playing Spellstutter Sprite." Nassif, who was playing the 1/1 Faerie in his "Next Level Brew" concoction, looked horrified at the thought that he had inadvertently handed his opponent a portion of his own deck. Smiling, Luis revealed that he had simply scouted Nassif earlier in the day. The two laughed, then got down to business.

"I mulliganed four times last match," Nassif complained, after losing the die roll and mulliganing not once but twice before keeping five. Scott-Vargas kicked things off with Snow-Covered Forest and Llanowar Elves. Nassif started on a Seat of the Synod and a Chrome Mox, using the extra mana boost to play a Spellstutter Sprite countering his opponent's attempts at a Nettlevine Sentinel. Luis seemed unfazed, quickly playing a second copy of the 2/2 Elf Warrior as well as a Wirewood Symbiote.

Gabriel Nassif was very far behind in the game. Having been forced to play two copies of Chrome Mox after mulling to five cards, he had quickly played everything in his hand. His opponent, meanwhile, had gotten busy amassing an army of Elves, including a tricky play in which he had used a Heritage Druid combined with Nettlevine Sentinel to play a Birchlore Ranger in order to get enough mana to bounce the 1/1 with a Wirewood Symbiote and replay it as a morph. The extra point of power increased his clock and the score stood 16-12 in LSV's favor.

Still, Nassif isn't a famous pro for nothing. His Spellstutter Sprite and a Vendilion Clique were allowing him to get some damage in, and when he found an Umezawa's Jitte waiting for him on top of his library, the game started looking downright bad for Luis Scott-Vargas. The troublesome Equipment could completely decimate the Elves! player's entire board. Luis tried to maneuver around the artifact, playing a Glimpse of Nature followed by a Heritage Druid, but failing to draw into any action. Nassif attacked to put the life totals at 7-6 in his favor.

Trying to get something going, Luis played an Elvish Visionary, but Nassif revealed the final card in his hand: Spell Snare.

"Obv. Why wouldn't I have drawn that card?" he asked rhetorically. Luis simply nodded and scooped up his creatures.

It was only fitting that Nassif had managed to win the first game on a mulligan to five after performing similar heroics in the Semifinals of the World Championships in 2007, where he was in the same spot against Patrick Chapin and managed to win a shocking upset victory despite a bevy of mulligans. If it bothered him he had just lost a game in which he had started with a significant advantage, Luis Scott-Vargas did not let on, making small talk with his opponent while shuffling. 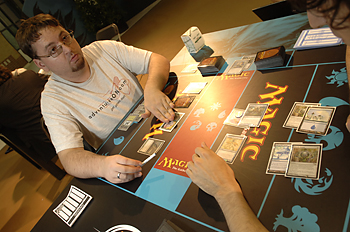 Vargas started the second game with a Llanowar Elves while Nassif simply made an Island. When LSV untapped and played Glimpse of Nature, Gabriel Nassif took a big swallow. Was he going to get comboed out on the second turn? Instead, Luis was happy to play two Elves, drawing two cards in the process and passing the turn. When he played a second Glimpse of Nature on his third turn, Nassif was ready with a Spellstutter Sprite to counter. The American pro nodded, then had enough mana to play Eternal Witness to get his important sorcery back. On top of that, he had amassed a not insignificant number of Elves that began getting into the red zone.

Nassif used a Vendilion Clique to force Scott-Vargas to put the Glimpse on the bottom of his library, but the extra draw from the 3/1 netted the California native an Umezawa's Jitte, which he quickly used to kill both of Gabe's creatures, the aforementioned Clique and a Spellstutter Sprite. With four mana up, Gabriel simply passed the turn, using a Repeal to bounce the Nettlevine Sentinel LSV had equipped his Umezawa's Jitte on. Tapped out, Luis had no choice but to pass the turn back.

Finding a Umezawa's Jitte of his own, Gabriel used the legend rule to blow up his opponent's copy of the Equipment. Unfazed, LSV tapped out to play a Regal Force, netting him seven additional cards. The game wasn't shaping up very well for the French player. Nassif untapped and played a Thirst for Knowledge. He agonized over the fresh contents from the top of his deck. "How many cards do you have?" he asked.

Facing overwhelming odds and with the round clock ticking down in the background, Gabriel weighed his options carefully. Finally, with a sigh, he simply said, "OK," and scooped up his cards, moving the players on to the third game of the match. 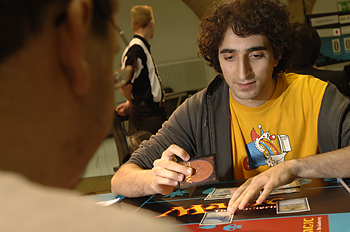 Nassif wields his weapon of choice.

For the second time in the round, Gabriel Nassif was forced to mulligan twice. Clearly frustrated, he shuffled aggressively, shaking his head in frustration. He kept his five-card hand, and watched seemingly helplessly as his opponent quickly exploded. By the third turn, LSV had a Llanowar Elves and three copies of Nettlevine Sentinel on the offensive. Nassif, meanwhile, had just three lands but used a Vendilion Clique to force Scott-Vargas to put an Umezawa's Jitte on the bottom of his library. Scott-Vargas was unfazed, playing an Elvish Visionary and a second Llanowar Elves.

Looking to get something going, Gabriel found a fourth mana and played a Umezawa's Jitte of his own, bashing his opponent with Vendilion Clique to put the score at 13-12 in his favor, then using the two counters on Umezawa's Jitte to kill Luis's Llanowar Elves. Scott-Vargas fired back by attacking Nassif to 6, then playing a Wirewood Symbiote, a fourth Nettlevine Sentinel, and Heritage Druid. That allowed him to bounce his Elvish Visionary and draw a free card, and it was clear that Nassif was upset at having blown his Umezawa's Jitte counters on the Llanowar Elves. He knocked the top of his deck aggressively, looking for a solution.

It wasn't immediately clear whether he had found one, but he sent his Vendilion Clique into the red zone to garner some more counters for Umezawa's Jitte. Using one he immediately killed his opponent's Symbiote, but Scott-Vargas bounced Elvish Visionary to make sure he could continue to draw cards. Nassif was forced to make a main-phase Spellstutter Sprite so he could equip Umezawa's Jitte to it, but unable to counter any of his opponent's remaining spells, he could only watch as Luis made a Regal Force, presenting enough action to earn a concession from Nassif.

"I would have won had I not killed your Elves, wouldn't I?" he asked the American, visibly frustrated with the game.