"Excuse me sir? Are you lost? Shouldn't you be keeping track of life totals or something?"

Rashad Miller has had his fair share of Pro Tour Top 8s, but most of them thus far have been as the spotter judge for the Tournament Center video coverage. While the team were kind of hoping to see him come back over to their side for Sunday, Rashad had other plans. With his 'All-In Red' deck, he sat at 4-2 coming into the round, where his feature match place was assured against Owen Turtenwald. While Owen is more of a fixture at top tables than Rashad, most of the crowd seemed to be there to see the judge showing how it's done. 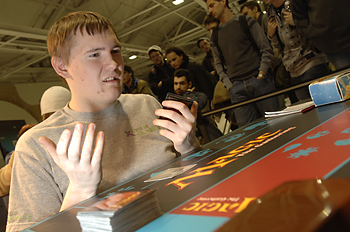 Rashad was on the play, and led with Simian Spirit Guide, Rite of Flame, Seething Song, Deus of Calamity.

Rashad had a second Rite of Flame and Magus of the Moon.

Owen scooped up his cards. Sorry, just re-read that sentence. He picked up the one card that he had in play. "Judge Unworthy! Judge Unworthy!"

Worthy or not, Rashad had taken the first game.

"Is this really the Pro Tour? There are all these Elves and big monsters..." Turtenwald whined rhetorically.

"This is fun! I couldn't find my Craw Wurms, but this is fun!" Replied Rashad.

For Game 2, Owen was on the play, but had to ship back his opening seven. With a frown, he drew six, and then started shuffling further, hoping that five might bring him the mix of lands and spells he needed. 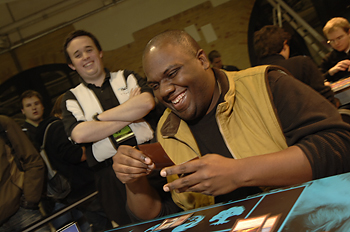 Rashad Miller is happy to spend the weekend playing instead of judging.

There wasn't the big turn-one play in Game 2, and Owen seemed pretty happy to be able to play Dark Confidant on the second turn unmolested. When a Turn 2 Demigod of Revenge joined in the fun, Turtenwald remained philosophical. He'd already had worse.

Dark Confidant plus Demigod put Owen on a short clock. Vendilion Clique jumped in the way of the big flyer, and bought a little time for Owen, but having tapped out he was left cold to Blood Moon, with just one basic Island among his four lands.

On Rashad's next attack, a Spellstutter Sprite got stuck in the way. It seemed that the only clock on Turtenwald at this point was Dark Confidant itself. As it was though, this clock was plenty good enough with Owen unable to cast most of his spells. After a Thirst for Knowledge failed to get him there, Owen extended his hand. The Pro Tour might need to find another spotter.

4 Empty the Warrens 4 Rite of Flame

2 Genju of the Spires 4 Blood Moon