Kenny Öberg has done well for himself on the European Grand Prix circuit this year, with a 33rd place finish at GP-Copenhagen and 25th place at GP-Paris. He is a noted deck designer and metagamer, often preferring the power of his own creations to netdecks. His "Tezzerator" deck has certainly turned heads this weekend, with its namesake planeswalker rounding out a powerful blue deck with a Trinket Mage tutor package alongside counterspells and creature control.

Denis Sinner, a German player who had battled his way to the top of the standings, was playing one of the more relatively known decks, a Faerie build very similar to those seen in the most recent Standard season, with the twist of Riptide Laboratory to reuse the powerful "comes into play" effects of various Faerie Cliques and Spellstutter Sprites.

Öberg appeared dissatisfied with his opening hand and mulliganed... then pondered the six, shook his head and decided he needed to go down to five to have a chance of winning. Sinner nodded as Öberg furiously pile shuffled then stuck with his five card hand, obviously displeased. His German opponent kept his initial hand of seven. 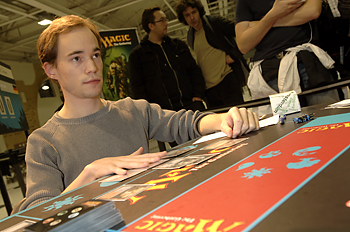 "Whew, you have lots of cards," said Öberg jokingly as he wrote down the contents of Sinner's hand. He then decided on Bitterblossom, and Sinner drew a card to replace it. A murmur rose up from the crowd s Denis prepared to play a land, at which point the murmur became calls for the nearby judge. Sinner's Bitterblossom had found its way to the graveyard when the Clique stated that it needed to go to the bottom of his deck. The judge quickly resolved the situation and Sinner then played his own Vendilion Clique main phase, invoking the legend rule to remove both of the 3/1s from play, and revealing another Vendilion Clique, Thirst for Knowledge, and Miren, the Moaning Well from Öberg's hand.

Sinner put the Thirst on bottom, making Öberg's next play a kind of déjà vu – his Clique in Denis's draw step. Since the last time we encountered our hero – the Vendilion Clique – Sinner had drawn a Cryptic Command, which Öberg decided to bottom. Sinner then revealed Spellstutter to play Secluded Glen untapped, then passed.

Another Vendilion Clique came down for Denis in the draw step, causing time to unravel and forcing the entire tournament into a time loop. For the fourth time in the game, the Clique found a spicy target in the form of Tezzeret the Seeker along with an Engineered Explosives. Sinner, paragon of players of Faeries everywhere, declined to play anything on his own turn passing it back after dropping a sixth land.

Öberg took the opportunity to play Vedalken Shackles, which Sinner considered and then let resolve. He then broke his fetch and played a naked Spellstutter on Öberg's end step, heralding a beginning of the beatdown phase. He hammered in with the Spellstutter, putting Öberg at 17 to Sinner's 19.

Responding to an Engineered Explosives set on two, Sinner made a second Spellstutter and the attacks began in earnest. Over the course of the next few turns, Öberg used Vedalken Shackles to try and steal the Sprites but found himself repeatedly thwarted by Mistbind Clique and Riptide Laboratory. Luckily, once Sinner tapped down, Öberg laid a fifth mana source and played Tezzeret the Seeker, immediately sending his planeswalker down to one loyalty to fetch Ensnaring Bridge, which looked pretty amazing at locking up the skies and forcing Sinner to find an answer to his own freshly played Bitterblossom.

Denis could not untap fast enough to get a remaining Spellstutter Sprite in the red zone to attack the planeswalker while Kenny still had enough cards in hand to allow it. Sinner formed a plan and tried another Mistbind Clique in Öberg's upkeep, hoping to make virtual Mana Short into actual massive attack force. Öberg let the Clique resolve, but countered the Champion trigger with Stifle to avoid getting shorted on his mana. Öberg finished the turn discarding two cards to a resolved Thirst for Knowledge and playing his last card, an Island. Sinner suspended an Ancestral Vision and waited for an opening in the Bridge's shields.

Öberg quickly recognized his worst nightmare was recursive Mistbind Clique using Riptide Laboratory, locking him out of playing drawn spells. He went for Trinket Mage as soon as he ripped one, and suffered the injury of a thousand Faerie stings from Sinner's developing air force in order to make it to eight mana... then tapped out for the X = 4 Chalice of the Void he fetched to lockdown Clique replays. Sinner counted up his Faeries, noted it was only 6, shrugged, and then played Mana Leak to counter it, earning a smile from Öberg.

Denis attacked Kenny down to 7 while he had the chance, but when he attempted to Riptide Laboratory returning a Mistbind Clique championing Spellstutter Sprite, Kenny stole it with his Shackles. He then played out an Engineered Explosives set to zero, waiting until the Bitterblossom trigger resolved on Denis's next upkeep.

As it turned out, that turn was also the one on which the Ancestral Vision was scheduled to resolve, so Öberg was first forced to Cryptic Command the unsuspending sorcery, letting Sinner return Spellstutter Sprite with Riptide Laboratory to counter the Cryptic. Öberg popped the Explosives, killing a horde of Faerie Rogues, and got ready to recur his Explosives with Academy Ruins. Faced with Chalices and Explosives coming back every turn in the face of counterspells, Denis scooped.

Denis's Faerie Rogue tokens are actually of his own design, mimicking the Magic token style but using his own action-shot art. 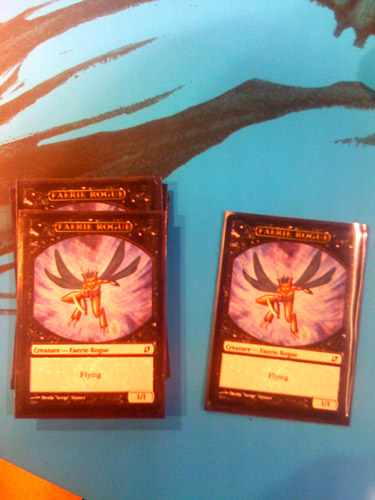 Denis mulliganed on the play, and then mulliganed again in a repeat of the first game's opening. The players went draw, land, go for a while until Denis broke the Faerie player mold and did something on his own turn – he suspended Ancestral Vision. On Denis's fourth turn, Kenny went for an end step Thirst for Knowledge but ran right into Denis's Cryptic Command (countering and drawing), tapping out the Faerie player.

Öberg saw the opening and resolved Tezzeret after playing a land and a Mox imprinting Stifle to get up to five mana. His victory was short lived, however, as after fetching a Pithing Needle set to Mutavault his next spell was Cryptic Commanded, bouncing Tezzeret as well. On the next turn, Denis suspended a second Visions, with the first ticking down to one suspend counter. Kenny played a Trinket Mage, fetching Chalice which he then attempted for 0, but Sinner surprised him with an Annul. Öberg seemed to collect himself, however, Stifling the unsuspending Visions.

[insert image align left: 103108 6170.jpg cap= "Denis Sinner tries to get his Faerie horde online."]Öberg got his beatdown on with Trinket Mage and then replayed Tezzeret, who played a good Garruk impression as he untapped Great Furnace and Chrome Mox. Trinket Mage came in again, putting Sinner at 16 with a horde of 5/5s looming from Tezzeret's ultimate ability. Sinner was completely out of action, so Öberg ultimated Tezzeret. With his Furnace, Mox and Needle ready to smash in for 15 total, Denis was forced to use his last card – a Cryptic Command – as a cantrip fog.

With Kenny in complete control with a living Tezzeret and plenty of Academy Ruins activations returning Explosives and Chalices, Denis scooped 'em up.

"Tezzeret is..." Öberg claimed, finishing by merely shaking his head at how amazing the planeswalker has turned out to be for him.