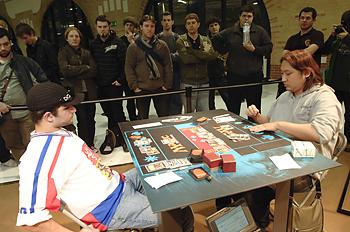 Gadiel Szleifer and Kazuya Mitamura have both come a long way to be here.

Going into Round 8, there were but a few undefeated players, but certainly among them were some recognizable names. Gadiel Szleifer won Pro Tour–Philadelphia, in Block Constructed, and while Kazuya Mitamura has yet to win a Pro Tour, he has a whole bevy of Constructed Top 8s.

Kazuya won the die roll and led with a Llanowar Elves. Gadiel, meanwhile, had a Chrome Mox to allow a turn-one Dark Confidant. The Mox from Gadiel was soon taken down by Viridian Shaman, but Gadiel had a scary follow-up in Umezawa's Jitte.

Mitamura's plan was not stymied yet, though. A Wirewood Symbiote allowed Mitamura to bounce and re-play his three drop, taking out the legendary equipment. While Mitamura's start wasn't as explosive as many from the very powerful Elves! deck, it was proving perfectly reasonable against Szleifer.

Heritage Druid put things fully online for Mitamura. He could now play and re-play Elvish Visionary to up the cards in his hand, and gradually mount a formidable offense. Gadiel was having to work a little harder, with Dark Confidant slowly but surely whittling down his life total. He used a Smother to kill off Wirewood Symbiote and passed with mana up. Nettle Sentinel from Mitamura resolved just fine, and was soon followed by Regal Force, which drew Mitamura six cards.

Dark Confidant dropped Gadiel to 10. He simply played a land and passed. Mitamura, meanwhile, had no intention of such a quiet turn. He began by attacking with his entire team, waiting for something from the other side of the board. Mutavault got activated to become blocker #2, and Spellstutter Sprite also came online. Gadiel blocked to maximize his trade, killing off Elvish Visionary, Heritage Druid, and Nettle Sentinel, but dropping to just 2 in the process.

Not a moment later, Szleifer dropped to one to crack a fetchland, in order to Spell Snare an Elvish Visionary. Kazuya played a couple more Elves and passed. Gadiel was drawing very thin. He had a Thirst for Knowledge to dig deeper, but for Game 1 at least all that digging was just his own grave. 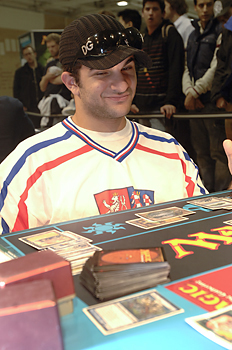 Going first, Gadiel tore seven cards from the top of his deck. His left leg jiggled slightly as he pondered their worth. If anything, towards the end of the day, Gadiel seemed more animated and focused than he had at the start. Undefeated at this point, he had plenty to be excited about. A mulligan came from Szleifer, but there was also one from Mitamura, who nodded at his six and allowed play to begin on a fairly even footing.

Mitamura had a Llanowar Elves on turn one, while Szleifer again had Dark Confidant. In their own way each of these Constructed specialists had a card drawing plan going on, but it seemed likely that Szleifer's would be more painful, as Mitamura simply played an Elvish Visionary, which got him started on a chain of a pair of Birchlore Rangers.

Gadiel had some tricks. An Engineered Explosives set at 1 reduced Mitamura's board to lands and an Elvish Visionary, allowing Dark Confidant to crack in. Bob was being kind to Szleifer, revealing lands, and keeping the race tight.

After his initial flurry, Mitamura's explosiveness seemed cold to the more engineered variety from Gadiel. A second Engineered Explosives was met with a Chord of Calling for 3, that found another Elvish Visionary to draw Mitamura a card. Gadiel played a Secluded Glen, allowing him to show off a Spellstutter Sprite in his hand. This was enough to get Mitamura to scoop up his cards. Out of gas, he would have trouble resolving relevant spells after his early rush had been stopped.

This game saw another mulligan from Szleifer, who briskly pile-shuffled his deck, eager to get into the game. Mitamura led with Birchlore Rangers on turn one, but lost his Wirewood Hivemaster to a Spell Snare. From there, Gadiel's best friend Bob was once again on side. A morph (most likely Birchlore Ranger) came out from Kazuya, who passed. Szleifer was playing draw-go, while Mitamura was having quite a think before doing similar. 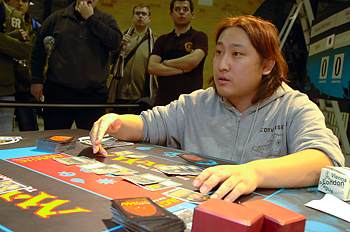 Gadiel had a Thirst for Knowledge at the end of turn, discarding Agony Warp and a land. He wasn't keen to do much more than play land on his turn though, and allowed an end-of-turn Chord of Calling for 2 to resolve. It found a Wirewood Hivemaster, which on its own threatened to make further Chord of Callings very dangerous. Gadiel didn't like that plan, and went straight in with Smother on the new Elf. Dark Confidant revealed another Smother the very next turn, taking Gadiel to 10, but affording him some control against the mounting force on the other side of the table.

Gadiel played Engineered Explosives for 1, and cracked it, responding by killing Mitamura's morph with Smother. The next turn he had an Umezawa's Jitte to clear up a couple of Llanowar Elves with Bob.

When Spellstutter Sprite countered a morph from Mitamura, things suddenly looked very good for Gadiel. He had a creature to swing with Umezawa's Jitte, and soon a Vendilion Clique to take away Glimpse of Nature from an otherwise unexciting Elf hand. These two fliers were joined by Dark Confidant , and Engineered Explosives set at 1.

Kazuya Mitamura drew his card for the turn, and scooped up his cards.