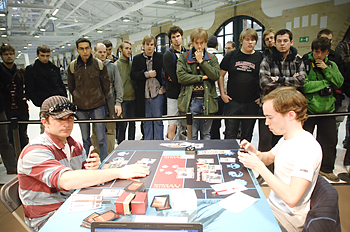 Undefeated Day One players—and fellow Swedes?!—Gadiel Szleifer and Kenny Öberg each fight to keep up their streak.

Bright and early in the lights on Saturday morning in Berlin, these two undefeated players were ready to rock, looking well-rested and determined to hold onto their X-0 records.

Kenny Öberg, noted deck designer and successful European GP circuit player, faced a rematch of his Round 8 battle against the Faeries deck. Öberg's Tezzerator base-blue control deck has already claimed three matches against Faeries this tournament in the "W" column, mostly on the tutoring power of the deck's four-dimensional namesake.

Gadiel Szleifer, longtime Pro Tour competitor and Pro Tour–Philadelphia winner, battled his way through a number of the new Elves! deck yesterday. Gadiel lives and plays in the United States, but what few people know is that he has dual citizenship in Sweden, Öberg's native land, and has even played in Swedish Nationals. Not only was this to be a battle of the sole remaining undefeated players, but also a conflict between countrymen.

"What did you play against last round yesterday?" Öberg asked.

The two competitors finished their shuffles and awaited Head Judge Sheldon Menery's announcement that the round had begun.

"You're in a hurry?" asked Kenny with a smile.

Szleifer considered his grip, and kept, irrepressible in the face of Öberg's stare. Having just won versus three Faerie decks yesterday, including Denis Sinner's build in the final round, Öberg quickly identified the important cards in the matchup and noted their absence in his opening seven. He sent them back, kept his six, and they were off.

Gadiel resolved an early Bitterblossom, normally a powerful force of inevitability in the matchup, but Kenny merely let it resolve and then countered back with land and Chrome Mox (removing Stifle) into Ensnaring Bridge, planning to stave off a massive Faerie horde while he positioned himself to maximize his deck's tutor and recursion power.

Szleifer made the legendary Umesawa's Umezawa's Jitte, threatening to upgrade any one of his 1/1 tokens into a combat monster, then on the next turn, equipped and smashed in for 1, bringing the totals after fetchlands to 16 all. Öberg attacked Szleifer's mana on the end step, using Cryptic Command to bounce Watery Grave and draw a card.

With Szleifer down to merely an untapped Island, Öberg saw that the coast was clear. He resolved Tezzeret the Seeker and fetched Vedalken Shackles with Tezzeret's -X ability, tightening the Faerie swarm in his anti-creature vise. Szleifer merely shrugged.

"Have any play?" asked Öberg, clearly satisfied with his position.

"I'm gonna," claimed Szleifer, who then played a Bitterblossom, a Watery Grave untapped, and a whopping third Bitterblossom.

Szleifer continued to produce tokens, but Öberg didn't mind, with his clock provided by Szleifer's three Blossoms. His hand remained at 0 for the Ensnaring Bridge, and he let his planeswalker buddy fetch Engineered Explosives into play (conveniently with X set to 0). Szleifer's life total clicked down to 7 to Öberg's 16 as he desperately calculated a way to get in with his Faerie armada. Szleifer had to act fast, understanding the dual nature of his Bitterblossoms: they giveth, and they taketh away (life points).

Kenny put a stop to that plan by popping the Explosives, wiping out his own two Moxen but an entire host of 1/1 flyers. He proceeded to repeat Tezzeret's tinker ability for a second copy of Engineered Explosives, played his deck's final two Chrome Moxes without imprints to empty his hand and left up mana for Shackles, letting the three Bitterblossoms drop his opponent to 1.

Gadiel saw the writing on the wall and packed it in.

The players sideboarded in silence, too focused on the serious match at hand for banter. 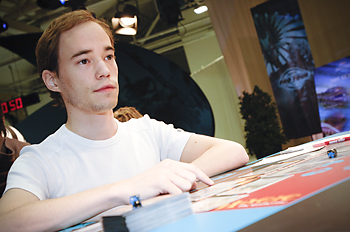 Kenny gets the point.

Szleifer opened on Mutavault with a Chrome Mox imprinting Dark Confidant giving him a start every Faeries player would love: turn-one Bitterblossom. Perhaps having learned his lesson that he would not be able to out-control Öberg's Tezz control deck, he immediately went aggressive, making his first Faerie Token (of many) and bashing in with Mutavault.

Another Faerie token and another payment to the Blossom, and Szleifer's attack put the life totals at 18 to 15, advantage Faeries. Öberg took the opportunity to explode Bitterblossom with an Engineered Explosives at X=2 to contain the Faerie generation. Szleifer was unfazed, untapping with now two active Mutavaults and bashing Öberg down to 9.

Öberg missed his land drop on turn four, but he had Trinket Mage for Chrome Mox and a second in hand, imprinting two blue cards for an extra

, but more importantly, a 2/2 blocker for a Mutavault. Szleifer untapped and attacked with just his two Faerie tokens, and Öberg bounced one with Æther Spellbomb.

Still missing his fourth land, Kenny passed it back to Gadiel.

Gadiel bashed in with his remaining 1/1 flyer, bringing Kenny to 7, and played out another Bitterblossom to keep his firm hold on the beatdown. When he tried to sacrifice Polluted Delta on Kenny's upkeep, going down to 17, Kenny replied with a firm "No," tapping for Stifle, then replayed his Riptide Laboratory-returned Trinket Mage for a third Chrome Mox.

Szleifer attacked with one Mutavault and his active token, getting Öberg to trade his Trinket Mage while tapped out and bringing him down to 6. Öberg untapped, played his third Mox imprinting Tezzeret, and played a sad Vedalken Shackles, still stuck on three lands with only one of them an Island. Szleifer still attempted to counter with Spellstutter Sprite, but the ubiquitous Stifle countered the Spell Blast trigger, and then the Shackles stole the Sprite.

Gadiel traded one of his two attacking 1/1s for the treacherous Spellstutter Sprite, making the life totals 15-3 in his favor. In Kenny's draw step, Gadiel employed the powers of Vendilion Clique.

"I'll take Tezzeret," said Gadiel, looking at a hand containing the planeswalker and a Threads of Disloyalty.

Still attempting to staunch the bleeding inflicted by tiny Faerie Rogues, Öberg tutored up a Pyrite Spellbomb with his freshly drawn Trinket Mage and ended his turn after playing it. Sensing the finish line, Szleifer activated Mutavault and Stifled Öberg's Shackles activation, allowing him to come in for the final points. 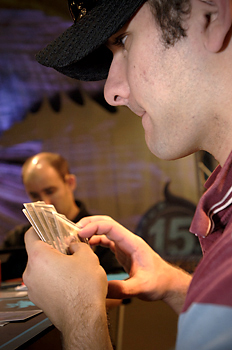 Gadiel's cap gives nothing away.

Öberg played a turn-one Breeding Pool untapped, going to 18, prepared to Spell Snare another turn-one Bitterblossom from Szleifer. When none was forthcoming, Öberg untapped and played a Chrome Mox, then best buds Riptide Laboratory and Trinket Mage, fetching a Great Furnace.

Gadiel stuck a turn-two Bitterblossom, but Kenny was quick to tap out with Engineered Explosives for 2, immediately blasting the Blossom. Kenny smashed in with Trinket Mage, bringing the totals to 17-18 In his favor.

Szleifer passed it back, missing his fourth land drop, but had Annul for Öberg's Shackles and Smother for his Trinket Mage. He beat with Mutavault to take Öberg to 16, and then merely watched and waiting as Öberg played another Mage for Pyrite Spellbomb.

Fearless, Szleifer bashed again with Mutavault and Öberg elected not to block, instead cracking back with his Mage on his turn, bringing the life totals to 13-14 (advantage: Öberg). Szleifer took this cue to race, again smashing with Mutavault and Stifling the Pyrite Spellbomb's attempt to burn out the changeling land, flipping the totals to 13-12. When Öberg continued the assault of the 2/2s, Szleifer blocked with his second copy of the 2/2 creature land, and had a second Stifle to stop the Riptide Laboratory from returning the tricksy Trinket Mage midcombat.

Gadiel got in one more hit with Mutavault to take the game to 13-10 before Kenny's Pithing Needle naming Mutavault stopped the 2-power assault. Kenny took another 2 to play Steam Vents untapped and dropped Ensnaring Bridge, looking for a repeat lockdown of Game 1.

Öberg drew tons of cards with multiple Thirsts, finally finding himself a Tezzeret, who immediately ramped to ultimate. Staring down four 5/5 artifacts and his own empty board, Szleifer extended the hand.