omoharu Saito and Luis Scott-Vargas quickly got down to business, both players well aware of what was at stake. 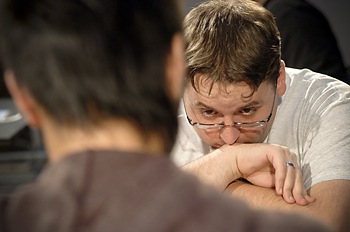 Luis Scott-Vargas is the sole representative of the U.S. in the Top 8.

Scott-Vargas won the roll and had a turn-one Llanowar Elves, to Saito's turn one Nettle Sentinel. In this race, not only was going first huge, but Scott-Vargas also had the power of Nettle Sentinel / Heritage Druid going on turn two. While over the course of the match Saito's sideboard options made him the favourite, in Game 1 the speed of Scott-Vargas's deck gave him a slight edge.

Saito was not about to lie down, though. He cast Glimpse of Nature followed by Birchlore Rangers, and tapped those two to cast a second Nettle Sentinel. A Wirewood Symbiote came next, untapping the two Nettle Sentinels that had tapped to cast it in the first place. He then returned Birchlore Rangers to his hand, after having floated mana, to keep his engine going. Once he replayed the Rangers, Chord of Calling for 1 found Heritage Druid. The Saito engine was running apace.

Elvish Visionary drew Saito two cards, and left him with one mana floating, having tapped three creatures to Heritage Druid for mana. Another Elvish Visionary soon came, and after it a Wirewood Hivemaster. Scott-Vargas sat passively on the other side of the board, arms folded, face calm.

A Summoner's Pact found Saito a Wirewood Symbiote, which he promptly cast. Gradually, Saito had been building up mana while playing his mana Elves, and it all paid off when he played Chord of Calling for 6. Predator Dragon was Saito's target of choice, and he swung for lethal once the Dragon had devoured his team.

It turned out that Saito could win on turn two as well....

After boarding, Saito's Chord of Calling could get a great deal scarier. With Orzhov Pontiff and Goblin Sharpshooter as targets, he could effectively stop LSV from going off if he had sufficient creatures in play to threaten a big Chord. Scott-Vargas would have to fight this with Thoughtseize. 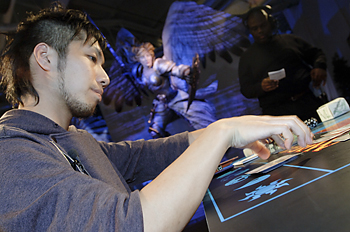 Scott-Vargas's turn was even quieter. He played a land and shipped the turn. After a little thought, on his turn, Saito played Summoner's Pact for Wirewood Hivemaster, played it, and returned and replayed his Nettle Sentinel to net an Insect token.

Scott-Vargas had another Thoughtseize on his turn, to which Saito responded with Chord of Calling to fetch Heritage Druid. The Thoughtseize revealed Viridian Shaman and Orzhov Pontiff. The Pontiff gheaded to Saito's graveyard.

A Birchlore Rangers came, allowing Saito, in spite of paying for his Summoner's pact, to make a lot of creatures—not least more Insect tokens, represented by Pro Player cards. Again, Scott-Vargas was left on the sidelines to watch for most of the game, as Saito's Elves deck got where it needed to be. Summoner's Pact found Regal Force, and when the monster hit play, it drew 13 cards for the Player of the Year.

From here, finishing things off was comparatively straightforward. Saito cast Glimpse of Nature, and had a full set of Nettle Sentinels soon enough. Chord of Calling for 6 found Predator Dragon for the second time in the match, and it was another game to Saito

On the play, Scott-Vargas knew that if he were to do anything it would have to be fast. He led with Llanowar Elves (a play matched by Saito) and followed up with Heritage Druid and Birchlore Rangers.

Saito had Wirewood Hivemaster, Birchlore Rangers, Wirewood Symbiote, and then a replay of Birchlore Rangers thanks to his Llanowar Elves and Symbiote. The presence of Hivemaster made things thoroughly tricky for Scott-Vargas. LSV cast a Glimpse of Nature, but knew that for every Elf he played, Saito would get an Insect that could allow for a lethal Chord of Calling.

A few Elves came down, followed by a second Glimpse. Still further Elves. Summoner's Pact found Nettle Sentinel #2. From here, LSV could simply produce a prodigious amount of creatures and draw a massive amount of cards. His only concern had to have been Chord of Calling. Scott-Vargas used Birchlore Rangers to produce

for Thoughtseize, making sure it was safe to win the game with Grapeshot.

"So all I have to do now is win two games on the trot!" said Scott-Vargas merrily. This hearkened back to his quarterfinals match against Kenny Öberg, where he came back from two games down.

In a spooky bit of deja vu, at this point Saito started taking mulligans, just as Kenny had before. He went down to five cards before seeing something he liked. While he started with Birchlore Rangers, his remainder was hurt greatly by Thoughtseize, which took Elvish Visoinary, and left him with nothing.

Fortunately for Saito, Scott-Vargas wasn't doing much either. Each player was, somewhat bizarrely, a draw-go deck for a few turns, with Scott-Vargas slowly getting one or two creatures out, and Saito having just lands.

Eventually, Scott-Vargas went for it with Glimpse of Nature. He had a Thoughtseize to remove Glimpse of Nature from Saito's hand, and played 4 Elves before passing the turn. The following turn, Saito got up to 3 creatures in play, but was cold to the 9 that attacked him when Scott-Vargas got to play. This attack wiped away some of Saito's board and took him to 8. When Saito drew for his next turn, he just laughed and scooped up his cards.

LSV was really giving the crowd their fair share of games to watch. After going to the full five against Kenny Öberg, he had now pulled it back in his Semifinals too. The crowd (over in another part of the hall watching on the big screens) were going wild.

On the play, Tomoharu Saito had a good long think about his hand. He had already woken himself up with his trademark face slaps, and didn't seem greatly happy. I know a few people like that when they first wake up.

As Saito took his mulligan, the whooping again came from the crowd. Saito began to laugh.

"You can blame Paul Cheon," said Scott-Vargas, who know that his teammate was rooting for him in the stands.

The six were a quick keep, as were Scott-Vargas's seven. Saito played a Heritage Druid for turn one, a play mirrored by Scott-Vargas. Turn two saw a Wirewood Hivemaster from Tomoharu—something that Luis could not match.

What he did have, though, was Nettle Sentinel, Elves of Deep Shadow, Glimpse of Nature, and Wirewood Symbiote. The Elves of Deep Shadow got replayed, and Scott-Vargas completed the next part of the puzzle with Birchlore Rangers. Saito was getting a huge number of Insect tokens, but it seemed that he must not have the Chord of Calling, as he was sitting passively while Scott-Vargas went off.

Nettle Sentinel #2 met a round of applause—now things were really cooking. It reached a point where Scott-Vargas was having to use a 30 sided die to keep track of his mana count. Summoner's Pact found him Regal Force. Thoughtseize from Scott-Vargas took Glimpse of Nature from Saito to ensure that there was nothing Scott-Vargas could not be stopped. Regal Force then drew him 15 (after the one from Glimpse of Nature). Saito was having fun putting Insect tokens into play, but had to know that it was all over.

"Do you want me to keep going? I have Grapeshot in my deck."

Saito nodded. It did not take long. Just a few further draws, and the Grapeshot came along to finish it. Two turn-two kills in one match. None too shabby. 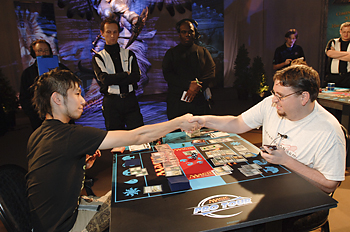 Scott-Vargas defeats Tomoharu Saito 3-2 and advances to the Finals!