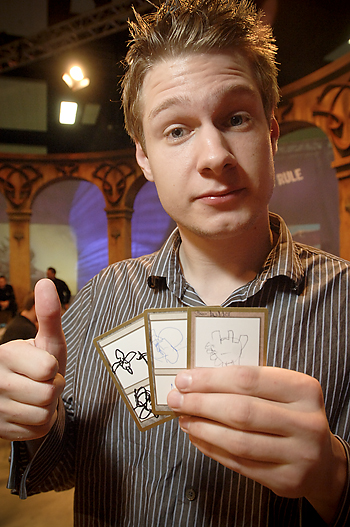 Paul Rietzl shows off his Thopter tokens of choice, lovingly illustrated by card dealer Michelle Cove's young son.While most of the room this weekend has been merrily cascading and casting Big Scary Spells all weekend, there have been a select few old-time pros who have chosen a different way in which to battle this weekend, which has proven brutally effective.

Honolulu is the sort of Pro Tour to attract many players for its location as much as the format, and a number of beach houses were soon full of drafters looking to have a good time before the show, and potentially brew up something spectacular to play with.

The list being played by Ben Rubin, Brian Kibler, Paul Rietzl, and Jelger Wiegersma, to name but a few, is pretty exciting, and is apparently the brainchild of Neil Reeves, who, while not playing this weekend, is still a force to be reckoned with.

Focusing single-mindedly on the beatdown, this Esper deck eschews the cascade route, instead looking to get stuck in with aggressive artifact threats at every turn. Court Homunculus makes a good start of this plan, and if followed up by Glaze Fiend , the Homunculus can provide the sort of clock that finishes things before many decks have found their feet. The deck was being championed by Jelger throughout testing for its ability to just do its thing and ignore even quite powerful Jund draws, as they could not meaningfully interact with many of the Esper threats due to the amount of flying creatures in the deck.

Glaze Fiend is all the better in this deck because of Thopter Foundry . This innocuous-looking artifact is one that has raised a few eyebrows, but it proves to be an utter beating in the deck, meaning that creatures don’t really die, and teaming up with Glaze Fiend and Borderposts for potentially terrifying amounts of damage. Killing on turn four with this deck is very doable, making even Bloodbraid Elf look a little too slow.

The Foundry also allows a cool trick with Tidehollow Sculler . By stacking the coming into play ability, then sacrificing the Sculler, it can be used to permanently remove a card in an opponent’s hand from the game. When things looked tight in one game, Kibler used this trick to keep Battlegrace Angel from ever hitting play. With the addition of Unsummon in the sideboard (an inclusion that got thought of just too late) this trick gets better and better.

Paul Rietzl, who with two rounds to go was solidly in Top 8, decided to go with a full set of Court Homunculus and just one Ethersworn Shieldmage , but others, like Brian Kibler, felt that the three-drop with flash was just too good not to run more of, with its ability to cause blowout board situations. Rietzl’s reasoning was that the 2/2 one drop plays nice with Esperzoa , and also allows some of the most explosive Master of Etherium draws, to end things if opponents are stumbling or playing too many lands that come into play tapped.

A final nail in cascade’s coffin from the beach house is the inclusion of Ethersworn Canonist . This bear does nothing to slow down the Esper deck, but means that opposing cascade spells can cascade all they want—the rules text on Canonist handily stops any additional spells being played, meaning that suddenly most of the cascade spells feel kind of overcosted. None too shabby.

Here’s Rietzl’s list—one that he was loving not only due to its power, but how much easier to get the cards for it was than many of the decks in the format.

I’ll leave the last word with Randy Buehler, with whom I was discussing the best possible name for the deck, be it Beach-house Beatdown or the Esper Stoneblade.

“I want to call it 'Isn't it cool that Neil Reeves still builds awesome decks? Please come back on the Tour, Niel.' It’s not as catchy, but I feel like it kind of sums the deck up.”