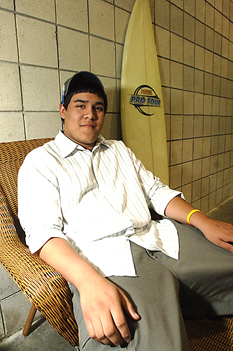 Calosso Fuentes of Washington, D.C. has been taking in the sun since Monday.Much has been said about the first Pro Tour–Honolulu in which a group of seasoned pros ventured to the beach, attempted to break the Standard format, and walked home with a title in the hands of Mark Herberholz. For the second event in Hawaii, the Magic blogosphere (and Facebookosphere) was abuzz with talk of play groups headed to the event early to take advantage of the unique opportunities provided by a Pro Tour in paradise. Earlier this weekend, we even brought you one such story in the video coverage.

For the second day of Pro Tour competition, the coverage team got a chance to catch up with some players who have been able to take advantage of the Pro Tour lifestyle despite not being big-name pros. Calosso Fuentes, a young student from the Washington D.C. area, ventured to the island to play at his very first Pro Tour. He came almost a week early to enjoy the sights and experiences of Honolulu.

“I got here on Monday [before the Pro Tour]. I left straight from Grand Prix–Seattle, and I don’t leave until Tuesday. One more day for seeing sights after the Pro Tour!” The young player was not only excited to be in Hawaii, but to be playing on Day 2 of his very first big event. “I’m staying with my friends Adam Yurchick, Tim Landale, Brett Blackman, and Niv Shmuely.” When asked how that motley crew came together, he explained, “I knew when I won the PTQ I was coming. I’ve always wanted to see Honolulu, and a few of us weren’t even qualified! Brett Blackman managed to LCQ his way into the Pro Tour. We had a big enough group that we decided it was definitely worth the stay.”

In addition to battling to a respectable record so far, Calosso and his friends had visited Pearl Harbor, gone to the North Shore, and spent plenty of time on the beach. “I love Honolulu!” the excitable D.C. player exclaimed. “They should make this a yearly event!” 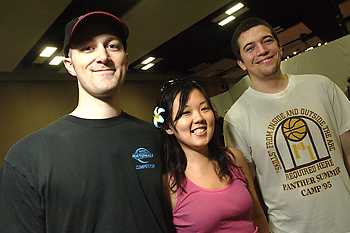 Brandon Scheel, Brandi Power, and Scott Bielick (l-r) are all here, even though only Brandon qualified for the Tour.A group of players who had made the trek together were Brandon Scheel, his girlfriend Brandi Power, and fellow Iowan Scott Bielick. You may recognize Brandon for his status as a level 6 pro, but neither Scott nor Brandi, who is also a Magic player, came to the event qualified. Said Brandi, “I got to do a lot of sightseeing, and experiencing the culture through the local cuisine. I like the Pro Tour for being able to interact with players, and everyone in Hawaii is really nice.”

After experiencing the first Pro Tour–Honolulu, Scheel knew what to expect the second time and didn’t want to miss any opportunities.

“The first time I came we didn’t do very much sightseeing,” said Scheel. “This time we got to see a lot of the sights.” He ticked off a list of impressive places visited, including Pearl Harbor, the Ala Moana outdoor market (the largest in the world), and of course the beach.

“He was so annoying about sunscreen!” Brandi teased. “Every five seconds he’d say ‘I think it’s time for more sunscreen!’“

Their friend Scott, a respected PTQ player who ventured on to the Pro Tour for the first time over the past season, didn’t seem shy about coming to Honolulu despite not being qualified to play the Pro Tour. “I needed a vacation after starting a full time job recently,” he explained. “I tried to LCQ, but that didn’t go very well.” Judging by his tan and the smile on his face, it seemed Scott’s rough go at the Last Chance Qualifier was mitigated successfully by the circumstances of being at the Pro Tour in Hawaii. 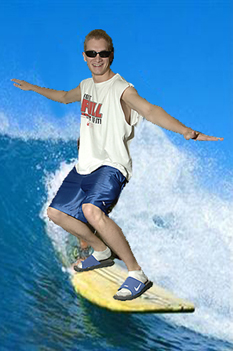 Brian Ross, seen here in a 100% genuine file photo, has hit the beach nearly every day this week.The last player we spoke with was Brian Boss, who lives in the Kansas City area. Like Calosso, he was playing in his first Pro Tour, and had ripped off an impressive X-2 record headed into the second day of competition. The former student, who now works in the restaurant industry, gushed about the good time he had been having with fellow Plains-staters John Rolf, Adam Boyd, and Kenny Castor. “I knew those guys from the PTQ circuit back home, and we were all qualified, so we came together. We’re staying ten minutes from the beach in Waikiki.”

So far the group had spent a healthy portion of their time at said beach, going nearly every day in the week that they’ve spent on the island.

“It’s beautiful here,” said Brian. “The sun, the weather. We’ve been outside as much as possible over the past few days.” Despite doing well in the event, the Missouri native was already looking into extending the trip. “We’re trying to see how much it would cost to stay later. I’m hoping to spend four or five more days in Hawaii!”

Whether it was their first Pro Tour, or their forty-first; whether they were qualified or simply coming to enjoy the unique experience of the Pro Tour in Hawaii, for Brandi, Brandon, Scott, Brian, and Calosso, Pro Tour–Honolulu has been an amazing experience in so many more ways than just playing cards.

The question now is: where will you be when the Pro Tour rolls into its next stop?