Working at Wizards of the Coast isn’t your typical nine to five. In a business that values innovation, creativity, quirkiness, and fun, you can find yourself called upon to meet all kinds of unusual challenges in the course of Monday to Friday. Even so, it must have come as quite a shock to some of the team of creative designers on the Magic: The Gathering team when they were confronted with ...

“Did you just give me the chance to design some shoes with Magic artwork?! Awesome!” That was the response of Jino Choi, a designer who spends most of his time coming up with packaging for boosters and displays—that’s when he’s not working hard on the upcoming Magic graphic anthology. Similar sentiments came from web site designer Jen Page, who has been with Wizards of the Coast for more than a decade.

“I was really excited, because we’re always getting different challenges, and let’s face it—girls love shoes,” she said.

The designers set to work on putting together some prototype designs, but this particular project isn’t about in-house professionals taking all the glory. This project is all about you, the fans of the game. Wizards have teamed up with ryzwear.com to give you the chance to be the Jimmy Choo of the Multiverse. Check out the contest on their web site, and download the template. From there, it’s over to whatever hip / chic / street / elegant design you can come up with. Let’s face it, you shouldn’t exactly be short on inspiration, with a staggering pool of more than ten thousand pieces of Magic art to work with. But for some clues, let’s find out how Jen and Jino went about the task.

“It turns out that Gatherer is a really good place to start” confirms Jen. “I started out by looking at each expansion as a whole, because that way you can see how the artwork comes together to make a coherent world.” This makes a lot of sense, since a world that’s all spikes and sharp corners like Mirrodin is a very different visual space to Champions of Kamigawa or a fairytale setting like Lorwyn. “I wanted the shoes to have a contemporary feel, and that naturally led me towards cards that are currently being played. There are many iconic pieces from the history of the game, but there’s no doubt that right now the cards that provide that are the planeswalkers.” 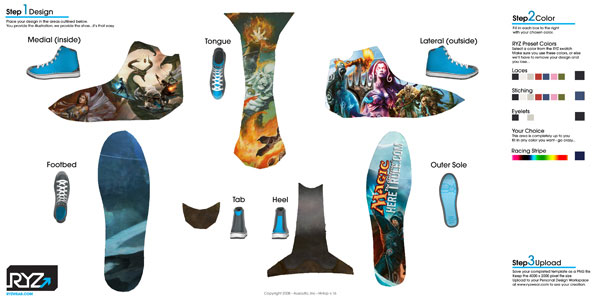 Jino also arrived at the planeswalkers, unable to resist the lure of the larger-than-life characters. “From there, I created a general tone for each side of the shoe based on the mood and style of each respective character.” For Jen, Liliana Vess was a standout, so her design features the tricksy black Planeswalker prominently, but she’s quick to point out that the whole squad is present.

How about some more tips for our budding designers? What’s it like working towards a piece that’s moving into a 3D environment, and a moving 3D environment at that?

“There are many similarities between print design and clothing/footwear design, but there are some small nuances that you have to consider, like how porous the printed surface will be, the allowable space allowed to work with and how the design will relay onto a moving wearable element,” says Jino, sounding every inch the professional. 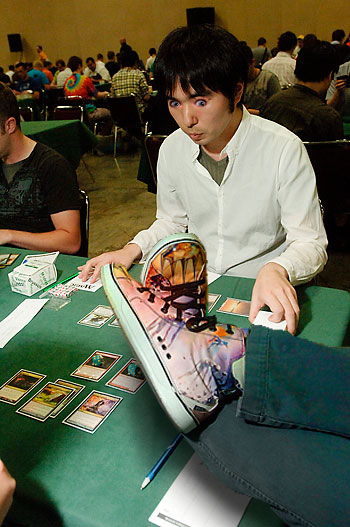 Shoe ... Hey, Nakamura!Jen agrees. “The 3D can be a challenge, because you’re doing the design onto a 2D template on the screen,” she says. “There’s certainly an element of mental guesswork involved.”

While the planeswalker designs they’ve been working on can already be seen at ryzwear.com, one prototype is already causing a major stir here in Honolulu, with a limited edition run of Gravestorm-inspired shoes being sported by the always-exquisitely-dressed coverage team. You can take a look at that design right here and get full details of this exciting contest that features great prizes alongside footwear immortality! But act fast—the contest ends soon.

And so, the crunch question: would you wear them?

“Definitely” says Jen. “I went a little crazy with the design, but I’m not afraid to wear it!”

“Absolutely! I’d get two pairs! No bias, I swear.”