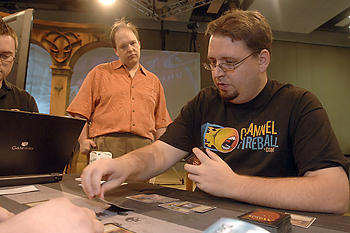 Luis Scott-Vargas, or LSV as he is known to his friends and fans, is a man on fire of late. He has Top 8ed nearly every Premier-level competitive event he has played for the past six months, including a Pro Tour title, a Pro Tour finals appearance, multiple Grand Prix Top 8s, multiple Grand Prix titles, and a Worlds Top 16 on his "off" weekend. Still, his story began just a few short Pro Tour seasons ago when he began making the rounds amongst professional circles as a mythical Magic Online creation. Digital event after digital event he crushed the world's best, yet remained an unknown quantity himself. Now he's become a household name.

Which brings us to the feature match. Sitting across from Luis was young Brad Nelson of Fargo, North Dakota. He was entering his first Pro Tour in almost the exact same shoes as Scott-Vargas had done just a few short years before. Known online as "FFreak," he is a Premier Event shark taking down Magic Online queue after Magic Online queue. His prowess in the digital realm had become so well-regarded it even snagged him a testing spot with the East Coast American crew that featured such big names as Chris Lachmann and Steve Sadin. His first round at the Pro Tour set up a story-perfect "old vs. new" battle.

"Did you break it?" Luis asked Brad as they commenced play.

"Broke it as much as everyone else..." Nelson demurred, slyly.

The two opened on lands for the first few turns, with Brad making the first play of Sedraxis Specter. Luis had a Maelstrom Pulse for the 3/2, and a second copy of the sorcery for Nelson's follow-up Madrush Cyclops. A Blightning, Noble Hierarch, and the unearth from Nelson's Specter saw Scott-Vargas down to just 8 life in short order.

Not letting on as to whether he was concerned about his situation or not, Luis kept playing lands, then used a Bituminous Blast to take care of a second Sedraxis Specter from Nelson. That revealed Terminate, which ate the Hierarch, and as Luis untapped against his opponent's empty board, he suddenly looked in good shape. When he tapped seven for Cruel Ultimatum—refilling his hand, leaving his opponent drawing off the top of his deck, and adding a healthy cushion of life—Nelson looked to be in dire straits. When the second copy of the Ultimatum hit the following turn, it looked to be all but over. Brad had a Sprouting Thrinax to try to climb back in, but Bloodbraid Elf and Wall of Denial from Luis, who still had a monster grip, was enough for Brad to pack it in for the second game.

Tri-lands were the first lands of the game for both players, but Sprouting Thrinax hit the board for Brad Nelson on the third turn. He followed up with Madrush Cyclops, sending his opponent to 14. Luis was ready with a Captured Sunlight, revealing a Sprouting Thrinax of his own. That would help him hold off his opponent's team, but at 3/4, the Madrush could survive a block, and was still providing all of Brad's creatures with haste. The Alara Reborn rare could prove to be a surprise hit from the Dakotan.

Nelson plopped a Sedraxis Specter into play, and immediately sent his team into the red zone. After thoughtfully considering blocks, Scott-Vargas decided to chump the Cyclops, falling to 12 but sprouting a swarm of Saprolings to buy him some time as blockers. It wasn't much time, as Brad's next play was to plop Uril, the Miststalker onto the board. The 5/5 mythic rare was a hard-to-find commodity on the weekend, as the plethora of powerful spot removal in the Block format forced players to lean on previously unplayed cards like Uril to try to get an edge.

Luis used a Bituminous Blast on Sedraxis Specter, hunting up a Wall of Denial, in an effort to stay in the game. That allowed him to survive Brad's all-in attack, but when Nelson took the time to take advantage of a tapped-out Luis Scott-Vargas to plop Realm Razer on the board, ending Luis' hopes of clawing his way back out, the Berlin champion scooped 'em up. 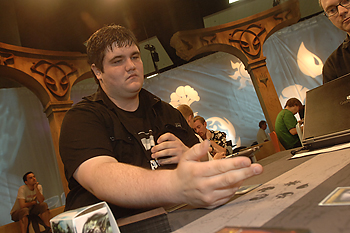 Will Brad Nelson, a.k.a. FFreak, do the same?

Noble Hierarch was the first creature on the board in the final game of the match, entering the field of play for Brad Nelson. Luis took the threat of the 0/1 so seriously he used a third-turn Maelstrom Pulse to remove the miniscule mana-maker. Brad fired back with Blightning, but Luis counteracted the effect of the card with an Esper Charm to draw the two cards back.

Trying to get his beat on, Brad Nelson rumbled a Bloodbraid Elf into the red zone, digging up a free Sprouting Thrinax. Not willing to fall behind, Luis played a Bloodbraid of his own, revealing Wall of Denial, but Nelson sent the team in the next turn anyway. The Bloodbraids traded, and the Wall blocked the Thrinax, but when Brad's follow-up was Flashbag Marauder, he netted himself three 1/1 Saprolings by sacrificing his Thrinax, while Luis was forced to bin his 0/8 Wall. Brad Nelson was doing his best to make good under the bright lights of the Pro Tour stage!

Sedraxis Specter hit play for Brad, while Luis had a Bloodbraid Elf revealing Terminate to deal with the Fleshbag Marauder. A Celestial Purge took care of the Specter, and Brad played Realm Razer to keep his opponent off kilter. Luis simply nodded, missed a land drop, then blocked with his Bloodbraid Elf to kill the 4/2 beast when Brad attacked with it the following turn. The combat step left Scott-Vargas at 9 life.

When Nelson tried to get on the board with Sedraxis Specter and Madrush Cyclops all in one turn, Luis hit the dream cascade of Bituminous Blast into Bloodbraid Elf into Maelstrom Pulse to wipe Brad out save for two Saproling tokens. When the Specter was unearthed the following turn, Bituminous Blast hit the 3/2, finding Esper Charm for Luis which he opted to use to make Brad discard his hand. Out of gas, Brad could only watch in horror as Luis got an Obelisk of Alara online and a third Bloodbraid Elf going, jetting his life total to 19, and spelling doom for Nelson.

When a duo of Sprouting Thrinaxes showed up for Luis, the board began looking even worse for Brad. A Uril, the Miststalker wasn't enough for the Midwesterner, and he soon succumbed to the horde of attackers from Scott-Vargas.