Pro Tour–Honolulu Round 10: May the Biggest Man Win 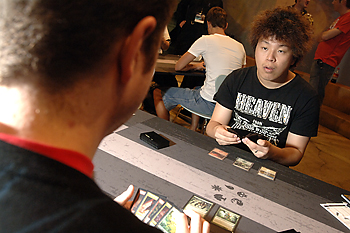 Rasmus Sibast first broke into the Pro Tour big time at Pro Tour–Prague, with the question “Who is Big Oots?” With his impressive drafting skills, Sibast had come from nowhere to be one of the authorities on Ravnica block draft. Now a fixture on tour, he finds himself on eight wins, and a more thoroughly medium-sized Oots looked businesslike and ready to play.

Sibast won the roll, but had to mulligan his opening seven. The six he liked better, and he took the lead, albeit slowly with just a pair of Plains and a Forest to begin. Nonaka had a similar start for the first couple of turns, but a Naya Battlemage and Cerodon Yearling allowed him to go on the offensive before Sibast had played a single spell.

A Swamp from Sibast suggested an unusual mana base that was causing him issues, and he looked on as Dragon Fodder and Paragon of the Amesha hit the opposing side of the board. He was quick to scoop up his cards in the face of such pressure. The game was too far beyond him to win back.

Going to the sideboard, Sibast had a great deal more information to work with than his opponent. Thinking about how the draft had gone, and watching Nonaka take out some cards, he asked, “ Ignite Disorder ?”

“Yes. Last round my opponent was Esper!”

“You got value from them then.” 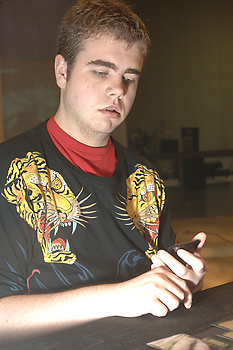 Rasmus ‘Big Oots’ Sibast has the eye of the tiger.

Sibast was quick to mulligan his hand for the second game, leaving Nonaka feeling pretty lucky. A card up on the draw for the second time in the match, he kept.

For Game 2, Sibast had spells though. Druid of the Anima was followed by Ember Weaver , while it was Nonaka with nothing early. There was no red creature to pump the Weaver, but Sibast did have a Grizzled Leotau for turn three. There would be less in the way of cheeky attacks from Nonaka this time.

An Intimidation Bolt killed off Druid of the Anima , keeping Sibast off any more white mana, and Nonaka followed up with a Wild Leotau and a Druid of the Anima of his own. Leonin Armorguard allowed for some big swings from Nonaka, who was gradually turning the game around with big creatures. A Kranioceros looked a good plan to sit back and trade with some of the threats on the other side of the board, but a Naya Charm to tap Sibast’s team was sufficient to finish things in brisk fashion.

1 Glory of Warfare 1 Trace of Abundance

This match was so fast that I still have the opportunity to bring you another.

It looked like over on the undefeated table, Zac Hill was in rough shape in his match against fellow American Tom Ross. On just 3 life, he faced down a Thornling , Rhox Mediant, Sighted-Caste Sorcerer , and a whole host of threats. However, Zac was on the comeback. Resounding Silence removed a Rhox Meditant that picked up Asha’s Favor , and a Stun Sniper kept Thornling tied up, while Cumber Stone slowed opposing attacks. He played a Wild Nacatl and Spellbound Dragon , and had the read on Colossal Might to not be killed off in subsequent attacks, making the double block required.

Zac’s five-colour control deck had plenty of lands—it just needed to keep hitting big spells. They were there in Prince of Thralls and Worldheart Phoenix .

“I did not think I had this one,” remarked Hill, momentarily happy in how wrong he had been.

Tom Ross looked troubled as he replayed game 1 in his head, trying to work out if he could have played differently to force through the extra points he needed.

Ross had a Wild Nacatl for turn one, and got to bash for 2 with it before casting Knotvine Paladin .

“Hmm .... This might be a short one,” declared Hill, who made the powerful (but not notably quick) Armillary Sphere .

Valeron Outlander was the next play from Ross, who did not have a third land. What Ross did have, though, was an abundance of two-drops. Each turn he bashed in, and built up his board, taking Hill to just 6 life before another spell came for him.

Kathari Remant cascaded into Stun Sniper for Hill, who didn’t necessarily have time to let either creature’s ability get online. The Kathari Remnant served only to chump-block Knotvine Paladin , and Hill dropped to 4 as Valeron Outlander hit him. A Cumber Stone came from Hill, who was now able to start using Stun Sniper , which shut down Knotvine Paladin .

Naya Sojourners pumped Valeron Outlander , which attacked Zac down to 1. Hill was in the tank, and in trouble. While he had 6 lands to his opponent’s three, he was all out of room to manoeuvre when it came to life totals. He cast Wretched Banquet to kill off Sighted-Caste Sorcerer , but it wasn’t enough. Too little, too late.

And so it came that Tom Ross was a game away from handing Zac Hill his first loss of the tournament.

Both players kept in the decider, and Zac led with Arcane Sanctum and a Mountain . Happy to see no turn-two play from Ross, Hill got to put the first real business card into play, in Wild Nacatl on turn four, as a 2/2. Ross had a Beacon Behemoth for his turn, but saw a Worldheart Phoenix from Hill, who had the mana (thanks to an Obelisk of Jund ) to be able to rebuy on it.

Ross had to make some threats of his own. Meglonoth certainly counted in this regard. With vigilance, trample and an ability that made attacking very unexciting, this bomb rare caused Zac to sit up in his seat and take notice. Hill played a Faerie Mechanist , but whiffed on finding anything with it, and passed, just nodding as Messenger Falcons and Druid of the Anima hit play for Ross.

Hill had a Cumber Stone , which lowered the threat of all those monsters on the other side of the board slightly, but didn’t stop Ross from attacking. His Beacon Behemoth and Meglonoth ran in, with the Behemoth being blocked by both Wild Nacatl and Worldheart Phoenix . A Colossal Might made that fight rather less fun for Zac, who lost both his creatures and went to 11.

When Hill tried to replay his Worldheart Phoenix , a Lapse in Certainty stopped it, putting it back on top of Hill’s deck. There was no chance to draw it, though, as a hasty Thornling came along. Ross was happy to smash in with the fatties and take the game fast.