It was a battle for Europe as Pro Tour–Honolulu competitors sat down for play in Round 11, with Belgian Christophe Gregoir squaring off against French Hall of Famer Raphael Levy. 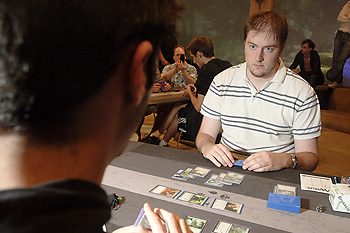 Christophe Gregoir represents the Belgian contingent in the Arena.

Levy was playing a deck centered around fatties, and he was quickly on the board with Rhox Brute and Mosstodon thanks to Druid of the Anima. Gregoir was playing a more tempo-oriented weenie deck, and he fought in the air with a Talon Trooper helped out by Akrasan Squire, and used Excommunicate to stymie Raph’s offensive efforts.

Levy attacked Gregoir to drop his opponent to 15, then replayed his Rhox Brute after drawing it for the second time thanks to Excommunicate. Christophe seemed almost happy with the play, then revealed why, as he untapped, used Celestial Purge on the 4/4, and bashed Levy down to just 10. The next big attack saw Christophe swing with Sacellum Archers, Talon Trooper, and Akrasan Squire. When both players had finished firing off spells, Raphael had used a Terminate and Resounding Thunder to kill the Trooper and Archers, while Christophe had used Gleam of Resistance to drop Levy’s life even lower.

It was a true battle, and the totals stood 6–1 with Christophe in the lead. Levy could attack for exactly lethal with a Mosstodon and Druid of the Anima, but would die on the counter attack if Christophe had any tricks. The French player agonized over what the correct decision was. It seemed he was a breath away from winning, but was he? There were a dozen tricks Gregoir could use to steal the game himself, but did he have them?

Levy threw caution to the wind, and sent the team. Gregoir tapped three mana and revealed Flurry of Wings, which created two blockers. He used one on the Anima, and took 5 to fall to 1. When Levy passed the turn, Christophe was quick to draw and turn the team sideways. At that, Raphael was dead to rights, and could only peek at the lands waiting for him on the top of his deck.

Hall of Famer Raphael Levy seemed a bit perturbed by the slight glut of mana he had hit in the first game of the match, and wasn’t happy when he had to ship his opening hand back for a second grip of six. Christophe, sensing his quarry was getting a bit frustrated, took a gentleman’s mulligan alongside Levy rather than wait for the Frenchman to finish and then mulligan himself. Both players were happy with six. 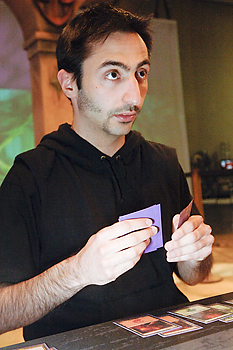 Levy came out of the gates with Druid of the Anima and Rhox Brute again, but Gregoir played a Naya Hushblade and used Crystallization to deal with the 4/4. That made his Hushblade a 3/2 with shroud, and he bashed Raphael to 17. Not to be outplayed, Levy followed up with Topan Ascetic and a Godtracker of Jund. The two were in a heavy back-and-forth, and the second game was turning into a quagmire; Gregoir tried to break it with a Hill Giant in the form of Sigil Captain.

Just a turn later, Christophe revealed his 3/3 wasn’t just a Hill Giant after all. He played Knight-Captain of Eos, who summoned forth two Soldier tokens to help affairs but, thanks to the Sigil Captain, the 1/1s became 3/3s. The Topan Ascetic did a good job holding off the team, but when Gregoir ripped Excommunicate, he put the troublesome 2/2 back on top of Raphael’s library and turned his entire team sideways. When all was said and done, Levy was at just 6 life facing a board of Sigil Captain, two 3/3 Soldiers, and a Sigiled Paladin. Defending his fort? A lowly Druid of the Anima, and the re-played Topan Ascetic from Excommunicate.

Levy looked to be all but out of it, facing superior board and at just 1 life thanks to more attacks from his opponent. He is, however, a Hall of Famer for a reason, and a masterful Lavalanche just in the nick of time allowed him to remain alive and put Gregoir to 9. Christophe hit back-to-back hits, however, with a Crystallization to neutralize Raphael’s Topan Ascetic, then a gigantic fatty in the form of Pale Recluse. Levy seemed crushed to see the 4/5 across the table, and took a final peek at the top of his deck.

Hall of Famer or no, sometimes it’s just not your match.

3 Crystallization 1 Sigil of the Nayan Gods

1 Knight-Captain of Eos 1 Gleam of Resistance