Pro Tour–Honolulu Round 12: Finger on the Pulse 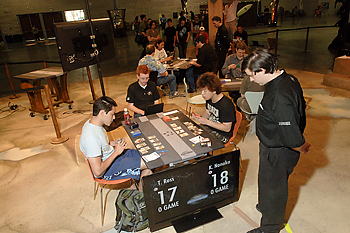 Table 1 in the late rounds of a Pro Tour is an excellent place to find Magic‘s biggest names. This round, however, the two names at the top of the standings are unfamiliar. Tom Ross and Kentarou Nonaka both have previous Pro Tour experience but do not have names that inspire fear in the hearts of Magic players—yet. Both of them won all six rounds of Draft this weekend and won four of the five Constructed matches they played yesterday.

One might wonder where they acquired the skills to put up that kind of results on Magic‘s biggest stage. Ross hails from Louisiana and Nonaka is from Japan, but both of them honed their chops on Magic Online. Neither of them prepared for the event with anyone else, choosing instead to trust their own experiences online. That approach has worked very well, and one or both of them may leave this weekend with a name that the world recognizes.

Ross’s deck was an aggressive Naya deck with a curve so low that he chose not to play Bloodbraid Elf at all. Kentarou was playing a fairly standard Jund list with a bit of spice thanks to the addition of Slave of Bolas.

Nonaka started with a Savage Lands and Crumbling Necropolis. Ross came out more quickly with Wild Nacatl, followed by a Naya Panorama that pumped the Nacatl to a 2/2. Nonaka’s first play was a Sprouting Thrinax; Ross matched it with a Dauntless Escort. Nonaka set the tone for the rest of the game with a surprising Algae Gharial. If the game went long, the Gharial would grow large enough to dominate.

A Ranger of Eos from Ross searched for two more Wild Nacatls. Nonaka also escalated with a Bloodbraid Elf that cascaded into a Terminate that targeted Ross’s Dauntless Escort. Ross sacrificed it in response to make his side indestructible, which kept Nonaka from attacking that turn. Ross further complicated the board on his own turn with one of the searched Wild Nacatls and a Noble Hierarch.

Nonaka’s Sprouting Thrinax lumbered across the table and did 3 damage to Ross before being joined by a second one. Ross did nothing and passed the turn back, holding the extra Wild Nacatl to protect against Maelstrom Pulse. Nonaka attacked again, this time with both the Bloodbraid Elf and a Sprouting Thrinax. Ross once again did nothing, but he used a Naya Charm to keep his opponent from attacking next turn.

Ross took the opportunity to make an attack of his own with two Wild Nacatls and a Ranger of Eos. It looked like the attack would be unimpeded, but Nonaka Terminated his own Thrinax to create three blockers. Two of them traded with Ranger of Eos and the third chump-blocked a Wild Nacatl. This pushed the Algae Gharial to 7/7. Ross played another Ranger of Eos after combat that fetched the fourth Wild Nacatl and another Noble Hierarch. He played them both before passing the turn back.

A few turns passed uneventfully while neither player could find a profitable attack. A new Sprouting Thrinax broke the monotony, then attacked into Ross’s four Wild Nacatls, Ranger of Eos, and Noble Hierarch. None of them were brave enough to block. Ross fell to 8 life. Next turn, a Bloodbraid Elf from Nonaka found a crushing Maelstrom Pulse that killed all four Wild Nacatls. Nonaka attacked with both Bloodbraid Elves, both Sprouting Thrinaxes, and the Algae Gharial. Ross chump-blocked to stay at 2 life, but had no way to stop from losing next turn. 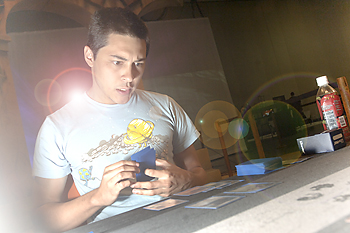 Ross focuses on the match.

Ross started the second game with Druid of the Anima, then Dauntless Escort and Wild Nacatl. In a repeat of the first game, Nonaka played a Sprouting Thrinax on his third turn. After a moment of thought, Ross shrugged and tapped out for a fourth-turn Thornling. Normally one wants to keep a green mana up to protect it, but the Dauntless Escort would do a fine job of protecting the Thornling if needed. Nonaka’s fourth turn brought Bloodbraid Elf and a Magma Spray, which he used to kill the Druid of the Anima.

Thornling does an admirable job of shrugging off Maelstrom Pulses and Terminates, and the only spell Nonaka had in his deck that could handle a Thornling was Slave of Bolas. The Thornling hit for 4, and Nonaka needed to deal with it quickly. A second Dauntless Escort from Ross made sure that should Nonaka do so, he would hardly be out of the woods.

Nonaka played an Algae Gharial. Last game it had had dominated the board, but this time the Thornling was currently outshining it. A Celestial Purge from Ross took out the Sprouting Thrinax, which allowed for the two Escorts, Wild Nacatl, and Thornling to attack. Nonaka blocked one Escort with Bloodbraid Elf and the Thornling pumped to 7/1. Algae Gharial grew to 3/3, but the carnage left it alone on Nonaka’s side.

Nonaka needed more defense and tried to even things up with a Bloodbraid Elf. He cascaded into a Terminate that hit Dauntless Escort, incrementing the Algae Gharial to a 4/4. Nonaka needed the Bloodbraid Elf to defend himself from the army. Unfortunately for him, Sarkhan Vol lured it over to the American side of the table. The Bloodbraid Elf‘s treachery was too much for the Japanese player, who conceded. 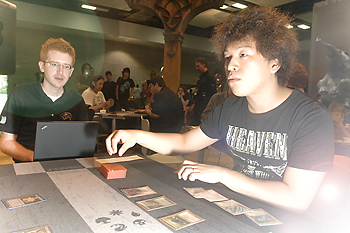 After that attack, Ross played Elspeth, Knight-Errant and made a Soldier token. A Maelstrom Pulse convinced her to go away, then the soldier she left behind traded with one of the Saprolings while the Wild Nacatl got in for 3. Ross hoped to pull ahead when Ranger of Eos produced two more Wild Nacatls, but Nonaka had a second Maelstrom Pulse to kill all three of them.

Ross rebuilt with a Martial Coup for four after attacking with the Ranger of Eos. Terminate killed the Ranger at the end of his turn. Nonaka’s only response was an Algae Gharial. Ross once again recruited Elspeth’s services and attacked with all of his creatures, one of which recieved Elspeth’s blessing. The Algae Gharial and Saproling traded for the two Druids, and Nonaka fell from 10 to 4 life.

Nonaka stared at his empty board. At four life, he would need something amazing to survive. Ross used Elspeth’s Angelic Blessing ability on the Hierarch, then cascaded into Bloodbraid Elf and Putrid Leech. A Naya Charm from Ross tapped the blockers, but a Magma Spray on one of the Soldiers alowed Nanako to survive the turn at 1 life. Elspeth granted one of the Soldiers flying next turn, and Nonaka conceded.

Nonaka leaves this round with two losses, and Ross leaves with only one. Both players are still in great position to turn hours and hours of Magic Online experience into their first Pro Tour Top 8.