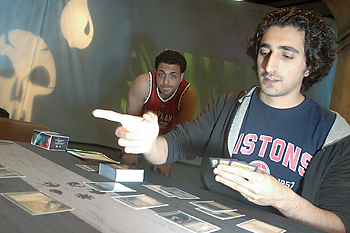 Nassif cursed his own lack of attention in Round 12 as he speculated what his opponent Noah Swartz was playing. They had been sat next to each other the very round before, but Nassif had been absorbed in his own match, and missed the key information he needed. Having run through with a perfect record on the draft portion of Pro Tour–Honolulu, the French player was in good shape for a Top 8 berth, in spite of not being too enamoured with his Constructed deck.

Nassif relied on his opponent Noah Swartz to provide a die to decide who would start, but lost pretty hard. Gerard Fabiano was standing in the crowd, and cheering on Nassif, but had offered a high-five to Swartz if he managed to win.

“There’s your incentive!” called Fabiano with a smile—as if cruising one slot closer to Top 8 on his very first Pro Tour wasn’t incentive enough for Swartz.

Swartz, one of the next wave of up-and-coming Midwest players, has been smashing face all weekend with his Naya deck, designed by Rasmus Sibast and heavier than most on the fat monsters. 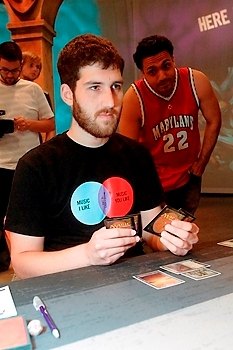 Noah Swartz is gunning for that high five.

Swartz had a mulligan, but still accelerated on turn two with a Trace of Abundance on Jungle Shrine. This met a Celestial Purge from Nassif, who followed up with Vedalken Outlander, who was a great answer to the Woolly Thoctar that came from Swartz. A Wall of Denial came next from Nassif, who looked well ahead until Elspeth, Knight-Errant came onside for Swartz, allowing for some hefty attacks from the sky.

Swartz played Cliffrunner Behemoth, and ran in with just his Elspeth-pumped Woolly Thoctar, wary of a Celestial Purge. When none came, Nassif was forced to chump-block with his wall—a pretty unusual state of affairs for this block.

On the back foot, Nassif cast Sphinx Summoner to find Glassdust Hulk, tapping out and leaving himself to watch on as Bloodbraid Elf joined the Swartz side of the board for some big swings. The Elf only brought a Trace of Abundance with it, but regardless, the attacks put Nassif on 7, and cost him his Sphinx Summoner.

With everything that Nassif was doing he found himself barely treading water, while Swartz was surfing a wave of fatties. He threw down another Cliffrunner Behemoth and swung in. This was enough to end Game 1 in dramatic fashion.

Nassif was already onto mulligans as Swartz deliberately counted out the seven cards for himself for Game 2. In the face of sizeable monsters, he needed a solid hand to keep up, and the opening seven weren’t good enough. 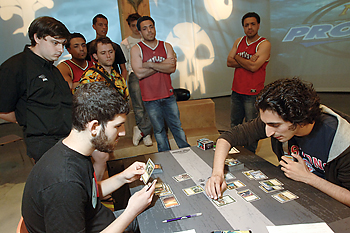 Swartz and Nassif play for an attentive crowd.

For the second game running, Swartz had the Trace of Abundance to accelerate, but this time Nassif wasn’t about to hit it early with Celestial Purge. A second Trace came down the following turn along with Woolly Thoctar, while Nassif just drew extra cards with a Courier’s Capsule.

Nassif had a Zombie Outlander with which to hold off Woolly Thoctar, but again Elspeth for Swartz made the Frenchman believe that a Beast really could fly. Nassif had his own Elspeth to ensure that this was a one-time miracle, and passed.

If the air plan was no longer working, Swartz was happy to go for the ground and pound. He had a Dauntless Escort and a second Woolly Thoctar, to make for a beefy board indeed. While one would be held at bay by Zombie Outlander, this would still be enough to knock Nassif down to a low life total the following turn.

Throughout the match Nassif had been on the back foot, and he played a desperation Identity Crisis, which hit a pair of Naya Charm in his opponent’s hand. Nassif provided himself with a congratulatory pat on the back. It was Swartz that set himself up for the high five though, as he ripped Path to Exile to allow a lethal attack.