Pro Tour–Honolulu Round 14: Lost and Foundry

“Where you from?” Paul asked his opponent as they sat down to their match.

“Japan?” Mitamura responded, not sure whether his opponent was being serious or not. 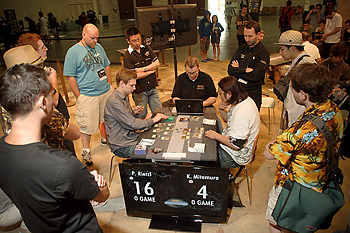 Paul Rietzl and Kazuya Mitamura are the center of attention.

No stranger to the Pro Tour Top 8 stage, Kazuya Mitamura was on a quest for a return trip to the single elimination rounds, needing just one more Swiss point to make the cut. His opponent, Paul Rietzl, is an old-school American pro who burst back on to the scene recently with a Top 8 performance in Legacy at Grand Prix–Chicago. He was playing the Esper Aggro deck that had been serving Brian Kibler very well on the weekend, and came out of the gates quickly with a 2/2 Court Homunculus thanks to Fieldmist Borderpost.

Mitamura, affectionately referred to as “The Chief” on Tour for his resemblance of the same character in the classic film “One Flew Over the Cuckoo’s Nest,” had Putrid Leech to stem the Homuncusault. When Rietzl plopped Esperzoa into play, however, the 4/3 promised to fly right over the Leech’s head. Paul continued his creature-casting rampage by playing an Ethersworn Canonist. The 2/2 was a great metagame choice, preventing players from getting their free spells from cascade cards.

Kazuya was slowly falling behind on the board, so he made an effort to catch back up. He used Maelstrom Pulse to blow up his opponent’s twin copies of Fieldmist Borderpost, leaving Paul on just two lands in play. The Japanese player was still losing the air battle, falling to 12 from his American opponent’s second attack with Esperzoa. Tidehollow Sculler from Rietzl revealed a hand of two lands, Enlisted Wurm, Broodmate Dragon, and Terminate for Mitamura. The East Coast native hid the removal spell, leaving Kazuya holding blanks for at least two turns.

Still, the savvy Japanese pro wiggled his way back in. A Maelstrom Pulse allowed him to blow up Tidehollow Sculler, netting him his Terminate back. He then used the instant on his opponent’s turn to deal with the 4/3 Esperzoa, and Reitzl found himself mana-shy after only drawing a single land since his Borderposts had been destroyed. Meanwhile Mitamura had built up the six mana he needed to play Broodmate Dragon. Paul played additional weenies in the form of Vedalken Outlander, then a Master of Etherium to Crusade his board. Unable to trade positively, however, he was forced to ship the turn back without attacking, leaving Mitamura on 8 life.

Bituminous Blast took care of the Master of Etherium for Kazuya, and the three-time Pro Tour Top 8er finally went on the warpath himself attacking with his 4/4 Dragon token from Broodmate Dragon. Rietzl took a moment to consider his own options once he had the turn back, then sent his team sideways. Kazuya quickly moved Putrid Leech in front of the protection-from-red Outlander, then his Dragon in front of Ethersworn Canonist, but it didn’t matter. Paul had Ethersworn Shieldmage, negating the damage from the blockers, and knocked his opponent to 4. When he played a Thopter Foundry the following turn, it looked like Paul Rietzl was playing the best Draft deck ever to see play in a Block Constructed tournament! His list was truly demonstrating the power of using cards “outside the box” to get ahead.

When a second Esperzoa hit the board, comboing with Ethersworn Shieldmage to ensure Rietzl’s creatures would never die to being blocked, Mitamura had just a few turns to find a solution. When he didn’t, the two players were on to the second game with the American leading. 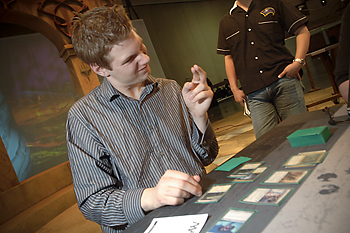 During the first game of their match, Paul Rietzl had played a dozen cards no other player in the room save for his testing group considered playable. He continued that trend unabashedly in the second as a Glaze Fiend from the America quickly forced Mitamura’s hand. Between Borderposts and Thopter Foundry, Rietzl’s miniscule 0/1 quickly became a monstrous threat. Kazuya played Terminate to end the attacks from it, but Paul simply followed up with Esper Stormblade.

The 3/2 flying beater was soon joined by a Master of Etherium, but when Paul attacked, Kazuya found some cascade magic. His Bituminous Blast flipped Terminate to take out both creatures, and all Paul could do was resignedly sacrifice one to the Thopter Foundry. When his opponent untapped and plopped a Broodmate Dragon onto the board, Rietzl clearly seemed bummed about the state of the game.

Esperzoa allowed Paul to deal with the Dragon token half of Broodmate Dragon, but Kazuya simply plucked a second Broodmate from the top of his deck. “That’s too bad,” the American grumbled resignedly. With just one card in hand and a lone Thopter token in play, it wasn’t looking good for Paul Rietzl. He tried to grind out a solution with Thopter Foundry slowly munching his Borderposts to chump-block the Dragons, but he couldn’t find a permanent solution to the 4/4s, and the players headed off to the rubber game. 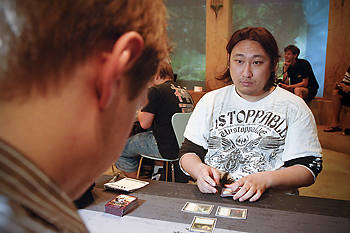 It was unclear at press time whether Mitamura’s shirt in fact appended ‘UN’ in front of ‘STOPPABLE.'

Paul Rietzl was quick to keep his opening hand in the final game of the match, but his opponent could not. Instead, Mitamura mulliganed once, then again. “I’d be lying if I said I wasn’t happy,” Rietzl commented demurely. When his opponent kept five, the two were off.

The first plays of the game, as in the first two games, came from the Esper deck. Paul played Ethersworn Canonist followed by Thopter Foundry (in addition to a flurry of Borderposts), and then followed those with a Master of Etherium. Mitamura simply watched, building up his mana base with “comes into play tapped” lands. In no time, the Master was a 7/7 and came rumbling, along with Ethersworn Canonist and a Thopter token, into the red zone.

“7/7?” Mitamura inquired quietly, verifying the size of the robotic behemoth headed his way. When Rietzl confirmed, the Japanese player used a Path to Exile to blow up the Canonist, falling to 6. With his own turn back, Kazuya went to work on Paul’s team. Bituminous Blast targeted the Master, and after revealing a few lands, the cascade ability flipped Infest. The sorcery could clear the board! The -2/-2 effect knocked Master down to small enough to die to the Blast. Rietzl didn’t get the opportunity to sacrifice his Master to Thopter Foundry, but got a 1/1 from sacrificing a Borderpost instead. He drew for the turn, attacked Mitamura for 1, then played Esper Stormblade.

Kazuya drew his last card for the game, and laughed. Flipping his hand of lands, he conceded the match. The powerful reveal from his cascade spell wasn’t enough, and Paul Rietzl needed just one more Swiss point to lock a slot in the Top 8.