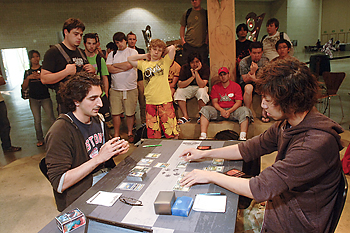 It’s no surprise that two names as big as Gabriel Nassif and Tomoharu Saito have drawn a large audience.

Gabriel Nassif and Tomoharu Saito are two of the best Magic players in the world. They are currently second and third in the Pro Tour Player of the Year race; Saito has 31 points and Nassif has 37. Only Luis Scott-Vargas, with 41 points, is ahead of them. Both players think they are out of contention for Top 8 here, but Pro Tours are by far the best place to get pro points, and these points will become very important near the end of the year.

Nassif is playing a Sphinx Control deck. It uses Wall of Denial to buy time for his game-dominating Sphinxes, which include Sharuum the Hegemon and Sphinx of the Steel Wind. His deck also contains an instant kill combination. When Two Sharuums loop each other in and out of play infinitely many times, Nassif’s Glassdust Hulks become both infinitely large and unblockable. Saito’s deck is much more straightforward. His green-white aggro deck uses mana acceleration to power out big creatures like Thornling and Battlegrace Angel. He’ll need to use them to win games before Nassif’s Sphinxes come online.

Both players mulliganed for Game 1. Saito started with Valeron Outlander, and Nassif matched with Vedalken Outlander. Saito decided not to offer a trade and spent his third turn on a full-price Fieldmist Borderpost. Nassif played a Wall of Denial and sat behind it. Ranger of Eos from Saito searched for two Noble Hierarchs, and Saito played one of them. An unconcerned Nassif dug for more cards by cycling a Glassdust Hulk and then playing a Courier’s Capsule.

Saito decided to up the threat level with a hasty Thornling that he sent to attack Nassif alongside his Ranger of Eos and Valeron Outlander. Nasif’s Vedalken Outlander traded with the Ranger, Wall of Denial blocked Thornling, and Nassif took 2 from the Valeron Outlander. Nassif had only another land after popping the Courier’s Capsule.

Saito played his second Noble Hierarch, then sent a 6/6 Thornling to attack Nassif. The Wall of Denial blocked; Saito made the Thornling 8/4 to kill it, then added a Rhox Meditant. No mana was left untapped to protect Saito’s Thornling, but he knew that there was nothing Nassif could play that would require him to make it indestructible.

Nassif played his sixth land, then used Esper Charm to make Saito discard two Celestial Purges and played a Mistvein Borderpost. This left him tapped out and defenseless. Saito took the opportunity to play a Behemoth Sledge and equip it to Thornling, then send everyone in. This left Nassif at 7 and Saito at 29.

All Nassif could do was untap and play a Sphinx of the Steel Wind. “I didn’t count if I’m dead or not. Maybe I’m dead.” 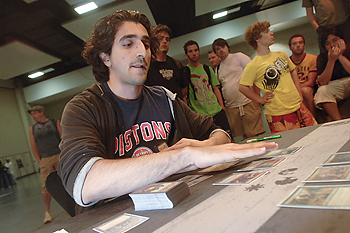 Saito took a long think, then read and re-read the Sphinx. Could he move the Sledge to the Valeron Outlander and sneak it past the Sphinx for 6? He chose to send in the equipped Thornling instead. Nassif gained 6 from first strike damage, then took 7 when Saito’s Noble Hierarchs allowed him to make the Thornling a 13/3 trampler and gain 13 life.

The rest of the game had crazy back-and-forth life swings. Each turn, Saito sent a 15/1 trampling Thornling at Nassif, who blocked with the Sphinx of the Steel Wind. That was a net loss of 3 life for Nassif and a gain of 15 for Saito. Then, Nassif would send the Sphinx in, taking 6 life from Saito. Every two turns, Nassif was gaining 3 life and Saito was gaining nine. Nassif threatened to break parity with a second Sphinx of the Steel Wind, but Saito drew a Celestial Purge for it.

Saito realized in the middle of this that had he put the Behemoth Sledge on the Valeron Outlander, he would have been able to win the game with a drawn Noble Hierarch or Ranger of Eos. As it was, both life totals were moving upward, which gave Nassif lots of time to assemble his infinite combination. Unfortunately for Saito, that’s exactly what happened about ten turns later. Both players had crept above 40 life, but a Glassdust Hulk fed by two infinitely looping Sharuum the Hegemons does not care what life total the opponent is at. Just such a Glassdust Hulk killed Saito in one swing.

Saito started the second game with a sideboarded Qasali Pridemage. Nassif played Courier’s Capsule and dared Saito to burn the Pridemage on it immediately. Saito chose instead to attack for 3, then use an Oblivion Ring to take Nassif’s first turn Borderpost. Nassif passed with no plays, and Saito used a Ranger of Eos to get two Noble Hierarchs. Nassif played a Wall of Denial when he finally hit three mana, and used it to block the Ranger, but Saito wasn’t done playing creatures. He added another Pridemage and the two Hierarchs.

Nassif had nothing better than another Wall of Denial. Saito added a fifth exalted creature in Battlegrace Angel, which made his Ranger of Eos into an 8/7 lifelinking attacker—exactly what he needed to crunch through one of Nassif’s 0/8 walls. Nassif drew two cards with an Esper Charm but appeared defenseless. Saito pounced by sending in all his creatures, but Nassif’s single untapped Plains allowed him to use Path to Exile on the Battlegrace Angel. A disappointed Saito spent another Oblivion Ring on another Borderpost, then passed.

Nassif played a Sphinx Summoner that tutored up Sharuum the Hegemon. Saito had no cards left, but drew a Bant Charm that he used to put it on the bottom of Nassif’s library. He attacked again for 6, leaving Nassif at 2 life with no way to stop next turn’s lethal attack. 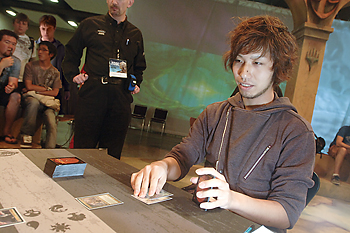 Going into the third game, Saito needs a win—and a haircut.

Saito started the third game with a Noble Hierarch and a Steward of Valeron. Nassif got into the acceleration game as well with a Mistvein Borderpost. Saito played a Qasali Pridemage on his third turn and attacked with the Steward for 4, then killed the Borderpost with the Mage. Nassif replaced it and added a Wall of Denial. Saito attacked with Steward and Ranger; Nassif Path to Exiled the Steward, but Saito responded by using it to make mana for a Celestial Purge on another Borderpost. Clearly Saito believed he needed to keep Nassif away from his expensive spells.

Nassif spent his turn drawing two cards with an Esper Charm. An unimpressed Saito threw a Thornling into play and then into the red zone, sneaking 3 more damage past the Wall. An Identity Crisis from Nassif next turn took away the four cards in Saito’s hand, but the Thornling still gave Saito plenty of tools to work with. He struggled with his options for too long and received a slow play warning before deciding to send the Thornling in as a 7/7. It ate a Wall of Denial, then Saito Oblivion Ringed another Borderpost. Nassif called in Elspeth, Knight-Errant and made a token, then finally got the Thornling off his back with a Path to Exile.

Saitou attacked Elspeth with his Ranger of Eos and forced the token to block. Nassif, however, had the biggest bomb in the form of a Martial Coup for five that cleared Saito’s board. Elspeth and the tokens teamed up to put Saito away in only a few turns.

It became clear after the round that Nassif was still out of Top 8 contention even with the win, but he is no doubt happy about the extra Pro Points that this match win earned him. We will no doubt be seeing both of these players on many more times in the near future as they try to become this year’s Pro Tour Player of the Year.