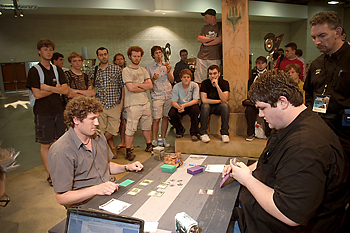 Mark Glenister and Brad Nelson come to this tournament from the strange realms of England and Magic Online, respectively.

This one goes out to the folks back home. Mark Glenister currently resides in Colchester, England, and is one of the regular U.K. players to zip around the country on the PTQ circuit and across Europe for Grand Prix shenanigans. His previous highest achievement in Magic was finishing third in a skipping race behind Quentin Martin and Kenji Tsumura at Grand Prix–Brussels. He might yet eclipse that today though as he finds himself at a very interesting intersection here at Pro Tour–Honolulu.

Mark, if he wins this round, will set up a seven-way tie for six slots in the Top 8 of this Pro Tour. He is the proverbial cat, and there are quite a few high-profile pigeons who will be birding this match in the hope that he isn’t set among them, making their draws all rather complicated.

Even better, Mark is playing a pretty fun deck: Four-Colour Bant Aggro, a choice that has the explosive potential to end games fast with the brutal combination of Rafiq of the Many and Colossal Might.

Mark’s opponent for this round is Brad Nelson, known to the world of Magic Online as FFreak—the scourge of Premier Event queues for some time now, who has shown that his performances online definitely translate favourably in real life also.

Glenister won the roll, and watched on as Nelson went through an extensive shuffling process (not something he has to worry about so much online). After a little thought, Glenister elected to ship back his opening seven, and required less thought to go down to five. 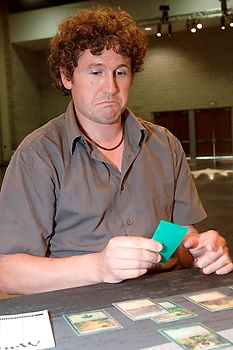 Nelson was solid on seven, and each player started with a tri-land. Glenister had Noble Hierarch on turn two, and a slow nod as Putrid Leech came down on the other side f the board from his opponent. Glenister cast a Dauntless Escort and passed, unable to attack into the Leech. Nelson was less inclined to hold back, getting in for two before following up with a second Leech.

Glenister chose to trade his Dauntless Escort for one of the Leeches the following turn, and played a Valeron Outlander to block the second one. Down cards anyway from his mulligan, Glenister was further punished by a Blightning from Nelson to clear the Englishman out. He soon had a Sedraxis Specter and let another Putrid Leech, but really, this game didn’t feel like much of a game as Glenister was so far behind on cards.

Attacks from Nelson rapidly put Glenister on 2, and his draw step did not yield some mythical answer. It was on to Game 2.

Nelson towered over Glenister in the Arena, but Mark did not seem disheartened by the way that the first game had gone—indeed, his demeanour remained much as it always is: happy to be playing the game.

For the second game of the match, Mark had but a single mulligan, and his Noble Hierarch came a turn earlier. Not ideal, but definitely a step up from Game 1. Glenister played Valeron Outlander on turn two, before Nelson was able to get a Putrid Leech into play.

A Rafiq of the Many meant that that Outlander could get in unimpeded for 8, putting Nelson to 12. There was a Noble Hierarch from Nelson also, who had a Terminate to kill off Rafiq at the beginning of combat. Glenister contented himself with swinging in for three, to take Nelson to 9, before playing Rhox War Monk. Nelson simply played Sprouting Thrinax and passed, only to find a Celestial Purge from Glenister was enough to get rid of the Lizard quick sharp.

Mark smashed in with his War Monk and followed up with Jenara, Asura of War. The legendary Angel was enough to square the match at one game apiece.

Going on current form, it seemed that Glenister’s gradually improving starting hand sizes should afford him a full grip of seven for the decider in the match. As it happens, this was the time for Nelson to mulligan for the first time. 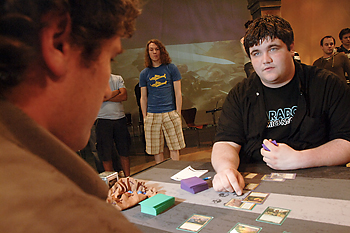 Nelson stays cool under the hot lights of the Arena.

Each player started with Crumbling Necropolis, but while Nelson carried on this way, Glenister had a Forest for turn two. The first creature of the game was a Sprouting Thrinax from Nelson, which got to beat in as Glenister failed to have a play for the third turn. Nelson had Bloodbraid Elf into Sedraxis Specter for his fourth-turn play, knocking Glenister down to 14 before a Bloodbraid Elf of his own found Jenara, Asura of War.

Nelson drew and chuckled slightly as he noticed his sleeves sticking together slightly.

“My hands are getting wet,” he noted, under the lights of the feature match area.

“Mine haven’t been dry all weekend,” replied Glenister.

A Maelstrom Pulse and Magma Spray cleared out Glenister’s board, meaning that attacks from Nelson took Glenister down to just 5 life. He played a Rhox War Monk and Valeron Outlander, desperately looking to stabilise from the fast start that Nelson had found.

Nelson wasn’t about to start attacking into Rhox War Monk, and contented himself with getting in for 3 in the air, to knock Glenister to just 2 life, while he himself rode high on a full 20.

Glenister drew and found nothing that was going to stop the flyer. He extended his hand, and a visibly relieved Nelson took it.

4 Bloodbraid Elf 4 Rafiq of the Many