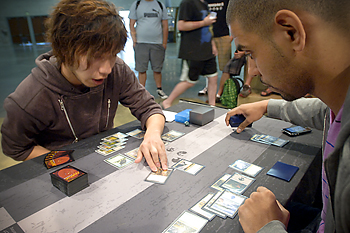 Dave Williams, a big name from Magic‘s past, is now a professional poker player. The World Series of Poker is a prestigious series of poker tournaments that happens each year and is happening right now, but the combined allure of Magic and Hawaii was more than enough to pull Williams away from Las Vegas for a vacation. Across from him is Tomoharu Saito, who currently holds the third place position in the Magic player of the year race. Saito is a world traveler; he was in Barcelona and Seattle, is now here in Hawaii, and has plans to go to next weekend’s Grand Prix in Sao Paolo, Brazil.

Williams is playing an Esper deck with lots of Sphinxes: Sphinx Summoner, Sharuum the Hegemon, and Sphinx of the Steel Wind. He also has four Glassdust Hulks, which become infinitely large when two Sharuums return each other to play over and over again. Saito is playing a simple green-white aggressive deck. His curve starts with Noble Hierarch and goes all the way up to Thornling and Battlegrace Angel. He needs to use his creatures to put Williams away before Williams’s Sharuums and Sphinxes of the Steel Wind make it impossible for Saito to win.

Saito matched Williams’s Arcane Sanctum with a first-turn triple land of his own in the form of Seaside Citadel. The Japanese player played a Valeron Outlander on his second turn, but matched Williams’s third-turn Mistvein Borderpost with a Wildfield Borderpost on his own third turn. Williams used Esper Charm to draw two cards, but Saito used Ranger of Eos to get his own card advantage. Williams’s deck decided to get in on the creature-searching game by giving him a Sphinx Summoner, which he used to find a Glassdust Hulk.

Saito’s protection from black Valeron Outlander attacked past the Summoner, then Saito played a Thornling and passed with Seaside Citadel up. Williams cycled the Glassdust Hulk, then cycled another one. Was he just going to get run over? He used a Corpse Connoisseur to put a Sharuum in his graveyard, but the Japanese side of the board was much more imposing.

Saito wasn’t sure how quickly Williams’s deck reached critical mass, and spent some time thinking. Did he need to win soon? He Oblivion Ringed the Connoisseur and sent in Thornling and Valeron Outlander. Williams chump-blocked the Thornling with his Sphinx Summoner and gave his opponent a questioning look, but Saito chose not to give it trample. Williams untapped and tapped eight for a Sphinx of the Steel Wind. Saito had Celestial Purge, which cleared the way for his creatures to win the game.

Before Williams conceded, he showed me two Celestial Purges that had been uselessly stuck in his hand. Saito’s straight green-white deck hoped to leave its opponent with useless main-deck hate cards, and that was exactly what had just happened. Williams sided out all of those Celestial Purges, as well as the Vedalken Outlanders that would have served him so well against a Jund deck but were nothing more than 2/2 vanilla creatures in this matchup.

While the players shuffled for Game 2, Williams noticed that Jon Finkel had already lost his feature match against Jelger Wiegersma. Williams had tested against Jelger with very positive results, and was confused about how Jon could have lost two games so quickly. The source of the confusion soon became clear: Williams thought that Finkel was playing the same deck, but it turned out that Finkel had audibled into something else since he and Williams had last communicated. 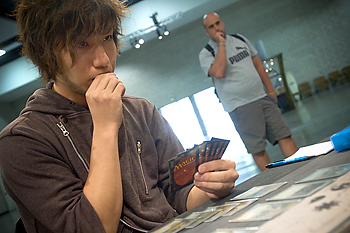 The second game began with more mirroring, as both players mulliganed to six. Williams got the better of the copying game this time when Saito had to mulligan a second time and only had one Forest during the early turns. Despite that, by turn three he had assembled two Noble Hierarchs and a Qasali Pridemage that hit for 5 in one swing before Williams had done anything other than cycle two Glassdust Hulks. Williams had the perfect answer for his fourth turn in the form of Elspeth, Knight-Errant, whose single Soldier each turn would happily block a single attacker pumped by exalted triggers.

Saito feinted helplessness by attacking Elspeth with his 5/5 Pridemage, and was not surprised when the Soldier jumped in the way. After combat, he surprised Williams with a Plains and an Oblivion Ring for Elspeth. Williams had a second Elspeth, and the previous turn’s attack and block routine repeated. Afterward, Saito tapped out for a Thornling that could trample over the little soldier token, but Williams used a Path to Exile to make it go away. Williams fortified his position further with a Zombie Outlander, but Saito’s Celestial Purge made it disappear before the determined Qasali Pridemage made a third unsuccessful attempt at damaging Elspeth, and then a Valeron Outlander joined the Japanese side of the board.

Williams cast a Sphinx Summoner and searched up Sharuum the Hegemon. Saito used a second Celestial Purge on it so that both Valeron Outlander and Qasali Pridemage could attack Elspeth, who fell to 3 loyalty. Saito then added a Battlegrace Angel. Williams’s response was to make another token, and he could only watch while the Battlegrace Angel took out Elspeth and the Qasali Pridemage destroyed Williams’s Borderpost to keep him off of Sharuum mana.

The Battlegrace Angel next turned its attention to Williams, attacking him down from 15 to 1 in two turns. On the last possible turn, Williams found a Wall of Denial that would protect him in the air while his army of Soldier tokens protected him on the ground. Of course, this assumed that Saito didn’t come up with another exalted creature, which would make the Battlegrace Angel 8/8—just big enough to crunch through the 0/8 Wall. Saito did not have another exalted creature and began attacking the Angel into the Wall just to gain life.

Williams drew a sixth land, which finally allowed him to play Sharuum and bring back Glassdust Hulk. The Sharuum fell in his end step to a third Celestial Purge from Saito, who untapped and then drew another Battlegrace Angel. This was exactly the exalted creature that he was looking for, and the now 8/8 attacking Angel finally crunched through the Wall. Unfortunately for Saito, Williams’s draw step provided the land he needed to cast Martial Coup to clear the board and put a buffer of soldiers between his opponent’s creatures and his last life point.

Saito rebuilt with Ranger of Eos for two Noble Hierarchs, but Williams followed up his Martial Coup with a Sphinx of the Steel Wind. Despite Saito’s 52 life compared to Williams’s 1, the Japanese player knew that the Sphinx would quickly take the game out of reach. He decided to concede and take his chances in Game 3.

While shuffling for Game 3, Saito accidentally flipped a Rhox Meditant from his deck, then asked a judge if he could go to the bathroom before playing Game 3. The judge kept track of time while he was gone. As soon as he had disappeared, Williams’s usually unflappable composure broke a little bit.

“Rhox Meditant? Really? I hope he draws and plays that guy!”

Williams also commented on how well timed his land draws were. He was frustrated for most of the game, but he would have spent the Martial Coup a turn or two before the second Battlegrace Angel hit. Had he had the lands to use it earlier, he probably would have lost the game. 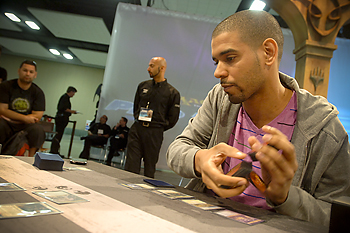 Williams mulliganed to begin the third game, and kept his six with a slight frown. Saito displayed no sympathy, playing two Noble Hierarchs, Steward of Valeron, and Rhox Meditant before Williams had any nonland permanents in play. However, Williams’s first action was a Wall of Denial, the perfect foil to Saito’s Noble Hierarchs. Williams got his wish again when Saito played a second Rhox Meditant before sneaking 2 damage past the Wall. Williams escalated with a second Wall to match the second Meditant. Saito also continued to build his side with Valeron Outlander and Elspeth, Knight-Errant, who made a Soldier. Would Saito’s army get past Williams’s two walls before Williams’s powerful late-game cards took over?

It didn’t hurt Saito’s cause that Williams was having mild mana problems. He didn’t have black mana yet, and he only had one source of blue. This meant he could play Courier’s Capsule, but not activate it. Saito spent an Oblivion Ring to keep Williams away from more cards, then attacked again. Williams used Path to Exile on one of Saito’s creatures but had no other plays. It looked like his chance was slipping away; Saito’s creatures continued to poke past the two Walls of Denial, and now there was Elspeth ticking upward every turn. If Saito had the chance to activate her ultimate, Williams would be in trouble.

Saito attacked again, putting Williams down to 5 life. All Williams played was another land. Another attack from Saito took Williams down to 2, then Elspeth ticked up to 8. Williams cast a desperation Esper Charm, then conceded.

I asked Saito after the match if he thought his Rhox Meditants were good against Williams’s deck. After a few moments of thought, he sheepishly shook his head and said no. He had built his deck to beat Jund cascade. A four-mana 2/4 that draws him an extra card was exactly what he needed to keep Bloodbraid Elves and Sprouting Thrinaxes at bay, but was not ideal for winning quickly against a slower but more powerful deck like Williams’s. Fortunately, they had been good enough to beat Williams this time.