Pro Tour–Honolulu Round 3: Smashing the Opponents 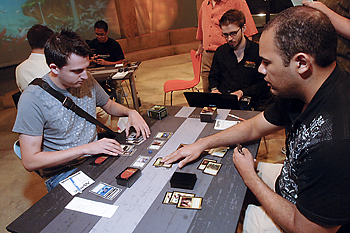 Mark Herberholz has a pretty happy relationship with Honolulu. Having won the last Pro Tour to stop here, he is back, again staying in a beach house, fulfilling both halves of the phrase “Play the game, see the world.” Osyp Lebedowicz is also seeing the world this weekend. One of several old-school pros back this weekend to enjoy some good times on the island, Osyp won a PTQ playing with Astral Slide in Extended, and is now back with a Jund deck sporting the ever-popular Bloodbraid Elf. Both Mark and Osyp have a good history in Block Constructed, with Osyp having used Astral Slide in Onslaught Block Constructed to win Pro Tour–Venice, while Heezy had made the Semifinals of Pro Tour–Yokohama back in Time Spiral block.

“You want to really get to him, ask him to take out his headphones!” said Lebedowicz. “He hates that.”

Brian Kibler was sitting at the next table against Paul Cheon in his bright white suit. With his music blaring through headphones (for the record, Kibler’s power song for the event is “Smashing the Opponent” by Infected Mushroom), he was oblivious to the jokes coming from behind him, with both Heezy and Osyp launching in. As Heezy won the roll and ordered the chicken, Kibler just nodded sagely. 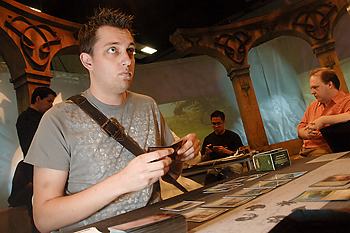 Heezy returns to the scene of the crime.

Herberholz led off with Court Homunculous. Lebedowicz played Savage Lands and passed. He muttered “Oneoneoneone” under his breath, before cursing as Ethersworn Canonist allowed the one-drop to attack in for 2.

Thopter Foundry and a Borderpost came next for Herberholz, before Lebedowicz managed his first play in Sprouting Thrinax. The early game was all about Mark, who had Glaze Fiend and got to enjoy watching Osyp’s Bloodbraid Elf fail to cascade thanks to his Canonist.

Esperzoa came down next for Herberholz, ensuring that the Glaze Fiend would be able to continue coming in. While Lebedowicz got in for his first points of damage, he was left to watch Herberholz’s force grow. Lebedowicz responded to a second Canonist by using Terminate on the first, and a second copy on Glaze Fiend. Mark was happy to use Thopter Foundry to trade in his creatures for something better.

Lebedowicz had a plan though. He had tapped out Herberholz to allow Slave of Bolas to do its work on Esperzoa. This was not enough, though, as Mark’s board never really diminished; Thopter Foundry made much of Lebedowicz’s removal redundant.

“I guess I could have played worse in that game,” remarked an unusually quiet Lebedowicz. “Probably not.”

The second game didn’t begin quite as aggressively for Mark as the first, but he still had the first threat of the game in Esper Stormblade. A Vedalken Outlander supersized it the following turn, but Osyp had the answer in Infest. Mark followed up with Zombie Outlander.

Bituminous Blast from Lebedowicz cleared Herberholz’s side of the board, and afforded him a Sprouting Thrinax. Herberholz had a second Esper Stormblade, and Thopter Foundry, but looked cold to the Broodmate Dragon that came down on the other side of the board. Blightning followed soon after, to clear out Herberholz’s hand, while attacks put him on 3. Low on life and needing blockers, Mark tried sacrificing Borderposts to his Thopter Foundry to gain both, but it wasn’t enough. Soon he was scooping up his cards and on to Game 3. 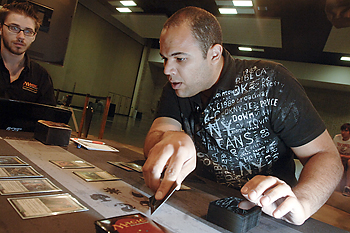 Herberholz was on the play for the deciding game, but couldn’t find an aggressive start in his opening seven cards, shipping them back and shuffling up. Lebedowicz kept his seven, and each player started on the appropriate tri-land for their deck. Mark had a Vedalken Outlander to start, but its protection from red would afford it little defence from Putrid Leech. Lebedowicz had a Terminate for Ethersworn Canonist, and a second for a Master of Etherium that soon followed. As Sprouting Thrinax came down, Lebedowicz seemed to be getting there.

A Tidehollow Sculler from Mark revealed though that much of Osyp’s gas had been spent. He revealed a hand of land and Spellbreaker Behemoth, which was quickly ejected from the game. Osyp was living off the top.

Living was good for Lebedowicz, though. He found an Infest to work as a one-sided Wrath of God and kept beating in. Esper Stormblade came from Mark before he took his next beats, and Herberholz shook his head as he cast Sanctum Gargoyle to return Master of Etherium and play it. He attacked for 4 with Esper Stormbade and passed.

Lebedowicz had yet another Terminate to take down Master of Etherium. Mark was knocked to 3 on attacks, with 12 damage left to deal to seal the game himself. Zombie Outlander provided a solid blocker, but Lebedowicz had Vithian Renegades to keep blocking options tough by killing off Sanctum Gargoyle. The scoop from Mark came only a draw step later.

With a little time left on the round, I thought I’d just bring you a quick bonus game from the Kibler-Cheon feature match one table over. After a marathon Game 1 that had ended with Cheon having 20 lands in play and winning with big spells, Kibler had taken the second one fast with his own “Esper Stoneblade” aggro deck.

Game 3 looked to be more like Game 2 than the first. Tidehollow Sculler took a Bloodbraid Elf from a Cheon hand containing both Thraximundar and Sphinx of the Steel Wind. Those high-cost threats would do little in the face of dedicated Kibler beatdown.

Brian soon had a pair of Esper Stormblades, Ethersworn Canonist, and Master of Etherium in play, allowing for some impressive beats. A Thopter Foundry was the final piece of the puzzle from Kibler, making his army very tricky to kill off.

“I would be impressed ....” remarked Kibler, wondering if Cheon’s draw could get him out of the situation he was in.

There was no help though, and Cheon scooped it up.