“Did you choose to buy those lavender sleeves?” Zac Hill teased his opponent as they sat down to play their Round 4 feature match.

“I just had them around,” Christophe Gregoir responded with a nonchalant shrug. Gregoir, an imposing Belgian, has a quiet nature about him despite his massive size (he stands just shy of six and a half feet tall, with a linebacker’s build). He is no stranger to playing with Zac Hill, an American who came to Honolulu by way of Malaysia and who has made a reputation testing with the Belgians for previous events. It was a battle between friends, though the busy schedules of the two, not to mention living on different continents, had prevented them from working together for Honolulu. 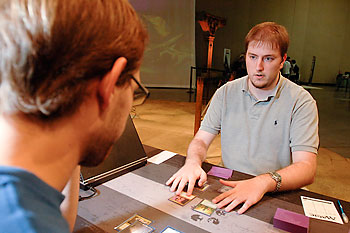 Christophe won the roll and came out firing with a Putrid Leech that quickly had Zac at 16. Hill, meanwhile, was content spending his early turns playing lands that came into play tapped. When Gregoir made a Bloodbraid Elf that cascaded into Blightning, Zac weighed his options heavily. He decided to discard Traumatic Visions and Esper Charm, indicating he was playing the Five-Color Control deck popular with a number of top pros on the weekend. Christophe’s attack with Putrid Leech and Bloodbraid Elf. Combined with the effects of the Blightning, this left the American at just 6 in the blink of an eye.

Looking to climb back in, Hill played a Bloodbraid Elf that cascaded into a Maelstrom Pulse. The sorcery munched Putrid Leech, leaving Zac with a 3/2 blocker to cling to another turn of play. His Belgian opponent was having none of it. He used Bituminous Blast to dispatch the 3/2 blocker, and when the cascade revealed a second Blightning, Zac did the math, recognized he was about to be dead, and scooped up his board for the second game.

Elvish Visionary was the first threat on the board in the next game, entering play for Christophe Gregoir on the third turn after a series of “comes into play tapped” lands kept him from having it on the second. Zac Hill didn’t seem too concerned about the lowly 1/1, landcycling his Traumatic Visions to make sure he hit his fourth land drop. Looking to improve upon his forces, Gregoir played a Bloodbraid Elf that hit a free Putrid Leech. When he moved to attack, however, Hill was ready with Celestial Purge to remove the 3/2 from the game and take just 1 from Elvish Visionary.

When the American moved to play a Bloodbraid Elf of his own, Christophe was quick to point out Zac couldn’t pay both red and green for the card with the lands he had, and Zac was forced to undo the play, simply passing the turn after playing an Arcane Sanctum instead. Hill wasn’t in too much trouble, however, as he had a second Celestial Purge to deal with the Belgian Putrid Leech, falling to 18 as Christophe continued attacking with his Elvish Visionary.

Blightning from Gregoir made things a little bit worse for Zac, who was left with just one card in hand. He played Kathari Remnant which managed to search up a Wall of Denial, then a turn later ripped Cruel Ultimatum. That was a pretty key draw, as Gregoir had played a Broodmate Dragon that was threatening to take over. The Ultimatum left Hill tapped out, meaning Christophe had an opening to use Bituminous Blast on Zac’s 0/1 Remnant when it couldn’t regenerate, and the Blast revealed Sarkhan Vol. That allowed Christophe to attack Zac back to 15.

The American tried to take advantage of his lead in the card count, playing a Bloodbraid Elf that revealed Esper Charm and netted Zac two more cards. He attacked Sarkhan to drop him to 2 loyalty counters, but fell to 8 life on Christophe’s return swing. From there, however, it was all Hill. A second Bloodbraid Elf netted Zac a second Wall of Denial, locking out Christophe’s dual Dragons, and it was Hill’s turn to attack the European. An Ajani Vengeant joined the team for Hill, and when he revealed a second Cruel Ultimatum the following turn, Gregoir packed it in. 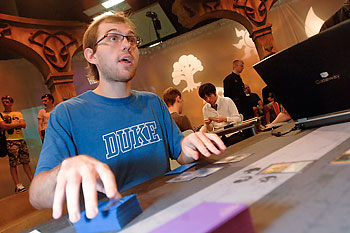 The effusive Zac Hill, seen here with his mouth in its customary open position.Anathemancer on the third turn from Christophe Gregoir nicked Zac Hill for 2 damage thanks to Zac’s double Arcane Sanctum opening, and the players were off in their final game of the match. The American was ready for the nonbasic-land-hating Gray Ogre the following turn when it attacked, using Celestial Purge to make sure it wouldn’t be unearthing to deal any return damage. Christophe took that opening to play Thought Hemorrhage, naming “Cruel Ultimatum“ and removing three copies from his opponent’s deck. There were none in Zac’s hand, though he did reveal Bloodbraid Elf and Bituminous Blast as potential threats Christophe would need to worry himself over during the next few turns of the game.

Blightning from Gregoir was answered by Esper Charm from Hill, who fell to 15 and discarded Bloodbraid Elf and a land to the sorcery. A second Blightning from Christophe was met with a second Esper Charm, and it looked like Gregoir was simply going to try to burn his opponent out, rather than get there in the red zone. Neither player had played a creature since the opening Anathemancer.

The Belgian put an end to that with a Bloodbraid Elf that netted him a free Putrid Leech. Hill was ready for the play with a Bituminous Blast on the Leech which revealed Celestial Purge for Bloodbraid. Gregoir played a second Elf, netting himself a Sprouting Thrinax for his efforts, then rumbled into combat with his 3/2. Hill had a second Blast, picking up a Wall of Denial in the meanwhile, and used Traumatic Visions to find his eighth land at the end of Christophe’s turn.

With an ominous mana count, Hill was able to plop none other than Nicol Bolas, Planeswalker into play, and a turn later he was swinging for the win while Gregoir, without a creature or a Maelstrom Pulse to take care of Bolas, could only watch helplessly.