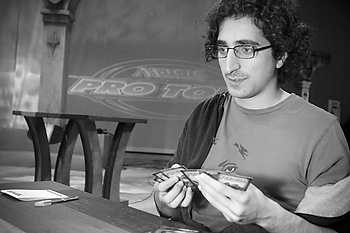 Wall of Denial is supposed to provide what Gabriel Nassif requires: time to think.Both Gabriel Nassif and Jelger Wiegersma are past Pro Tour winners and veterans of high-level Magic. Wiegersma’s Pro Tour win came in 2004 with Von Dutch at Pro Tour–Seattle, and his thirteen individual Grand Prix Top 8s and two other Pro Tour Top 8s were more than enough to get him into the Pro Tour Hall of Fame. Nassif’s win came this past March at Pro Tour–Kobe, but his resume goes back as far as Wiegersma’s with a Pro Tour Player of the Year title in the 2003-2004 season. Nassif will become eligible for the Hall of Fame this year.

Both players are playing Esper decks, but that’s where the similarity ends. Jelger’s “Esper Stoneblade” deck is very fast, using cards like Court Homunculus, Esper Stormblade, and Esperzoa to kill opponents as quickly as possible. Nassif’s Sphinx Control deck is slower, with Wall of Denial to buy time for big sphinxes like Sharuum the Hegemon and Sphinx of the Steel Wind.

While they shuffled, Gab and Jelger talked about the other people playing each of their decks. Dave Williams and Jamie Parke are each playing Nassif’s deck; going into this round Dave was 3-1, but Jamie was 1-3. Nassif reported that “I am mising the matches I win, and getting mised in the matches I lose,” so the jury on his deck is still out. Wiegersma’s deck is also producing mixed results; Brian Kibler was 4-0 with it, but Hall of Famer Ben Rubin was 1-3. At 2-2 before the last round of Constructed, both Wiegersma and Nassif would need to win all three matches in the draft to make Day Two if they lost this round.

Nassif exaggerated his roll to mock Jelger, and rolled an 11. Bemused, he said, “I guess it was the wrist. I’ll play.”

The first action of the game was a Glaze Fiend on turn two from Jelger. Nassif’s third-turn Wall of Denial promised to stand in its way, but Jelger wasn’t done playing creatures, adding a Tidehollow Sculler after playing a Borderpost. The Sculler revealed that Nassif lacked a fourth land, so Wiegersma took Esper Charm with the Sculler to keep Nassif from digging for more lands. Nassif played a second Wall of Denial, but had not drawn a land. Jelger played yet another Borderpost, then a Master of Etherium that would soon be large enough to run over the Walls. Nassif played only an unimpressive Protomatter Powder. 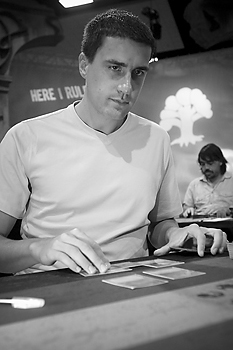 Jelger Wiegersma: a Hall of Famer as austere, unyielding, and inscrutable as Esper itself. Jelger pressed his advantage by adding Esperzoa and Vedalken Outlander, then sent in the rest of his team, getting 3 damage past the Walls. Nassif drew a Glassdust Hulk, but cycling it didn’t produce another land, and a Tidehollow Sculler from Jelger revealed another hand full of expensive spells that Nassif couldn’t play. Nassif chose to pack it up rather than continue as soon as Jelger pushed all of his creatures into the red zone.

Both players mulliganed to start their second game. Jelger started with Esper Stormblade, and Nassif played and activated a Courier’s Capsule off of Islands and a Swamp. A Tidehollow Sculler revealed that the hand Nassif kept after his mulligan was full of white cards that he couldn’t play—except for Sphinx Summoner, which the Sculler took. Next turn, Wiegersma added a Master of Etherium to his side of the table. Nassif had already started putting away his cards before Jelger had the chance to turn his creatures sideways.

Making the cut to day two will require a record of 5-3 or better. At the end of five rounds of Shards of Alara block constructed, Gabriel Nassif will need to win all three rounds of draft to have a chance to repeat his win at the last Pro Tour. Jelger Wiegersma is doing a little better, but can still only lose one match if he wants to play on Saturday.