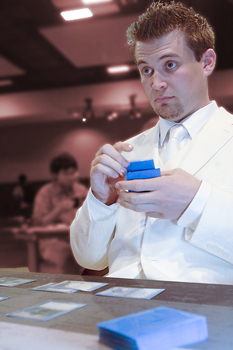 Brian Kibler’s draft deck is finger-lickin’ good.Brian Kibler has been having a great tournament thus far. Undefeated with his Esper deck going into the draft portion of the tournament, he would have to turn his hand to something a little different to keep his streak going. As it happens, though, there wasn’t so much difference for Kibler. His draft begun with a first-pick Tower Gargoyle and carried on the Esper plan that had worked so well throughout his tournament.

Sitting down at the table, mp3 player on, Kibler looked like a new-school version of something from Maverick in his white suit. His opponent, Christophe Huber of Switzerland, was not as happy with his deck, but also at 5-0, could not be too disappointed in his performance thus far. With a straight red-green beatdown deck, he would be able to be confident in his mana, even if his deck wasn’t quite as powerful.

Kibler won the roll with a 19 to his opponent’s 18, and quickly led off with Ethercaste Knight, following up with Metallurgeon. The first play from Huber was a turn-four Rhox Brute, while Kibler continued to build up his board, by landcycling to allow a Sigiled Paladin. A Bloodpyre Elemental killed off this second exalted creature before it could do a great deal, but Brian had a Frontline Sage to replace it, ensuring that his turn-two Knight could still rumble in for that little bit more.

Kibler’s Metallurgeon was able to block with impunity thanks to its regeneration, but became a natural target for Soul’s Fire from Huber once it had done so. As Christophe followed up with Toxic Iguanar, Kibler winced. He had an Excommunicate to send away Huber’s only green creature and allow himself another attack unhindered, but knew that the little deathtouch monster would be a pain for him.

For his turn, Christophe had to replay Rhox Brute, but Kibler was able to make a bigger monster in Arsenal Thresher, which came down as a 5/5.

“You’re at 10?” asked Kibler, as he showed a second Excommunicate for the Brute.

Arsenal Thresher came in, now unafraid of Toxic Iguanar. Christophe had a Gluttonous Slime, though, turning deathtouch back on again at instant speed to force the trade.

Christophe had to cast his Brute yet again, and Kibler used the tempo he had bought to play an Akrasan Squire, a Mistvein Borderpost, and a Parasitic Strix. His attacks and the Strix’s life drain left Chistophe at 4. When Kibler tried to go in for the kill with the Strix the following turn, though, a Branching Bolt took down both the flyer and Ethercaste Knight. Kibler shugged and played Glassdust Hulk.

Huber attacked Kibler down to 8 life, then played Quenchable Fire to put Kibler on 5. This wasn’t enough, though, and when Brian played an artifact to make his Hulk unblockable the very next turn, Huber scooped up his cards.

Kibler struggled with his suit pockets looking for his sideboard. He pointed out that while the suit was well equipped to hold hundred dollar bills, it was (for some reason) not really all about the drafts. Not that that stopped him from wearing it. 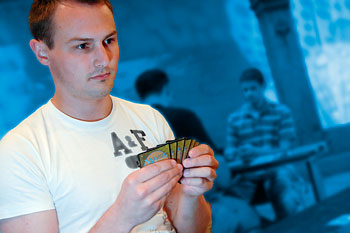 Christophe Huber packs enough removal to turn Kibler’s team extra crispy.Huber was on the offensive in Game 2, with Mage Slayer followed up by Marisi’s Twinclaws. Kibler, meanwhile, had Frontline Sage along with Arsenal Thresher, which came into play with three +1/+1 counters.

“I remember amplify,” remarked Brian, who suddenly had the biggest creature on the board.

Kibler took his beats from the Twinclaws and nodded as Algae Gharial came down. He cracked back with his Thresher and used Sedraxis Alchemist to bounce the Twinclaws before they could get out of hand.

Christophe was back to having to replay spells again, with the resulting loss in tempo hurting as Kibler continued to crash in and build up a board position. Kibler knocked Huber down to 8, then played Esper Cormorants. Huber drew and passed. He had a Branching Bolt ready to stop attacks from Kibler, but could not stop a Parasitic Strix from draining his life total a little.

A Dark Temper killed off the Strix before it could attack. Algae Gharial got up as big as 4/4, then swung into Kibler’s board of Arsenal Thresher and Sedraxis Alchemist. Kibler looked confused.

“You can’t Giant Growth him,” he murmured to himself, and blocked with Arsenal Thresher.

A Gluttonous Slime flashed into play and devoured a pair of creatures on Huber’s side of the board. Suddenly Algae Gharial was looking large and in charge, taking down the Thresher and sitting alongside a not insignificant Gluttonous Slime.

Fortunately for Kibler, he was well ahead on life at this point. Between a Glassdust Hulk and a second Parasitic Strix, he had enough to be able to push through a mere couple of turns later.

For his first Pro Tour in 4 years, Brian Kibler is certainly not showing any serious signs of rust, starting off undefeated after six rounds.